Blog - Latest News
You are here: Home1 / Article Archive2 / I was there3 / Crosswinds and emergencies—lessons from the simulator

Every pilot knows that ditty. It was composed as a caution for pilots about to commit aviation. Should you or should you not take off in these conditions? For me, a 15-knot crosswind gives me pause. While I have landed in one, the wind had changed since takeoff and the alternative was to land elsewhere. It is a different decision before taking off, as I fly just for fun, not for a living. 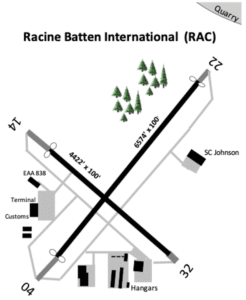 That quarry is an important detail.

Once, when EAA 838 was flying Young Eagles, I recognized the mother of one boy as a coworker. I invited her to sit in the back of my Cherokee, while her son sat in front. The flight was longer than the usual Young Eagle flight, and wind had shifted to 270 degrees. It was blowing a gusty 22 knots, close enough to the 15-knot maximum demonstrated crosswind for a PA28-140 to get my attention. The other pilots were using runway 22, which was also being used by jets.

Experience taught me that base-to-final over the quarry can be bumpy with a west wind, in addition to turbulence from trees near the approach end of runway 22. But 22 is long enough that one can turn base before the quarry and land long to avoid the turbulence of the quarry or trees. That was my plan, and I announced it both on the radio and to mom in the back seat. I also said I would be dipping the right wing on short final. She may not have understood me, as I could see white knuckles when she grabbed the top of her son’s seat. While my aiming point was before the intersection, she thought we would run out of runway, and right-wing-low terrified her.

We had plenty of runway. I announced that I was done flying Young Eagles, and taxied to my hangar. I drove them back to EAA 838 to complete the sign-in procedure. I have often repeated that flight on my flight simulator.

Wind from 270 degrees at 15G25 is a 50-degree crosswind for either runway 32 or 22, and right up there with my Cherokee’s maximum demonstrated crosswind. But which is easier, a crosswind from the left, or from the right? Runway 22 is 6,574 ft. long, with a quarry on short final and trees just west of the runway, while runway 32 is 4,422 ft. That is plenty for a Cherokee, and my side of the plane would be leaning into the wind.

I am not a test pilot, and closer to 80 years old than 70, so my choice on such a day would be to fly vicariously. In other words, on the flight simulator, where I can program wind, gusts, and turbulence, and it would cost nothing to keep doing it until I could do it perfectly. After many simulated attempts on both runways, I can tell you that I prefer the shorter runway. It was good practice, and included go-arounds when appropriate.

Another favorite practice is the “impossible turn.” How high do I have to be to successfully turn back after losing my engine on takeoff? While there is certainly a minimum altitude, the answer depends on ability to maintain both speed and angle of bank, and also on the length of the departure runway. One’s skill set can be enhanced by practice, something that is both inexpensive and safe to do on a simulator. 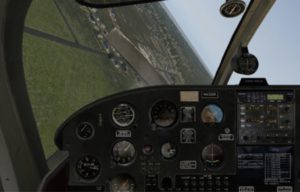 I found that I can consistently make it back to runway 04/22 from an altitude of 500 ft. MSL. Of course, it helps that the runway is so long. My technique is to maintain 80 mph IAS and a bank angle of 45 degrees. 80 mph is halfway between Vx and Vy, and a safe speed under the circumstances. But it is not that easy to keep both the speed and the steep bank angle constant, and that is why one practices.

A presenter at AirVenture 2021 recommended a bank angle of 60 degrees for the impossible turn. This is definitely harder to achieve, but one gets around faster. Would you be pulling 2 Gs in a 60-degree turn? (I used to throw up when I had to do level 60-degree turns in my student pilot days.) The answer is no, because you would be descending. Furthermore, it is load factor that increases stall speed, not bank angle.

While I never activated X-Plane’s random failure feature, I have triggered failures accidentally in the simulator. When starting a standard downwind-base-final pattern one day, the engine quit on the downwind leg. OK, this is good practice. After switching tanks and determining that mixture was full rich, I did a dead-stick landing. When stopped on the runway, I tried to restart. The engine would turn over, but not start. If you own an early model Cherokee, you may know my problem, and perhaps you’ve done it yourself. I know I did it about 35 years ago on a long final over cold Lake Michigan.

Note the red mixture toggle in the third photo. It was not always red. In fact, it used to look identical to carb heat, which is between the key and the throttle. On the day in question, I was flying from Racine to Milwaukee to get some radio work done. RAC is barely 10 miles from MKE, and I called approach from pattern altitude. 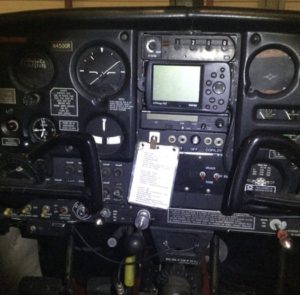 No problem so far, although going out over Lake Michigan (elevation 579 MSL) at a low altitude was a mite concerning. It is both cold and empty in winter, and those of us who live near it respect it. We fly around, not across. Anyway, the balky radio was working… or was it?

After hearing nothing for several miles, I called approach and got no reply. That darn radio again! After one more unanswered call, I turned west. They had told me to expect 25R, and could give me a light signal. I looked at the tower, which I could see. Surely, they could see my blinking landing light. No light signal from the tower. Should I squawk 7500 or 7600 for loss of communications? Which one meant I was being hijacked? Maybe another frequency…

“Milwaukee Tower, Cherokee 4500R is due east, about 3 miles off-shore. I lost contact with approach.”

“We were wondering when you were going to call… Cherokee 00R is cleared to land 25R.”

For me, this was a very long final. I pulled out carb heat, and the engine quit! Already rattled by the radio problem, I undid what I had just done. The engine roared back to life. I left carb heat alone after that and landed normally. Then I realized that I had pulled the mixture, and not carb heat. That is when I painted it red.

Back to my simulator: vFlyteAir’s Cherokee 140 Original closely replicates my 1965 PA28-140. Because the simulator’s external hardware does not include a carb heat toggle, I had activated the toggle on the 3D screen. However, just as happened 30+ years ago, it was the mixture toggle that I pulled, not carb heat. Interestingly, if I had cycled the mixture on the quadrant, it would have cycled the toggle on the screen, but not vice versa.

OK, it is important to remember that simulation differs from reality—but it is close, and the practice helps. 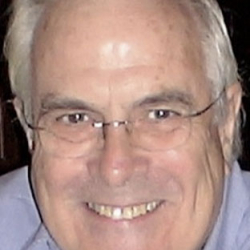 Sean Dwyer
Seán G. Dwyer is a Private Pilot and long-term owner of a PA28-140. Although born in New York, he grew up in Ireland before returning to the USA to attend university. After earning a PhD in chemistry from UND, he had a career in industry, retiring in 2001. Major ongoing interests include promoting STEM among teenagers and explaining the sciences that enable aviation. He is the author of STEM for All Ages, and served as Curriculum Chairman for Young Aviators Inc., a weeklong summer program in Racine, Wisconsin, for teenage boys and girls.

On landing well: 9 steps for success