Blog - Latest News
You are here: Home1 / Article Archive2 / I was there3 / Birdwatching from above

Reasonably good flying days in the Pacific Northwest winter can seem to be few and far between, so when one happens to occur on a day when you can also make time to go flying it’s almost a command performance for all of the reasons why as both a pilot and airplane owner you hate to see the plane sitting on the ground for possibly weeks at a time. 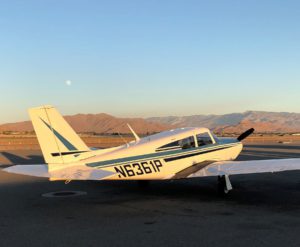 On this particular day it was even more so than usual. Between snow closing the runway, heavy rain, dense fog, and stormy winds, it had been over three weeks since the engine had fired up. In my head I could see the fog condensing inside the engine and generating all kinds of nasty byproducts; I was certain the battery must be right on the limit of being able to turn through the cold-sticky oil to be able to get the engine started and recharge; and all manner of other cold and damp weather-related demons had me watching the forecast for any conceivable opportunity to get some air under the wheels. The forecast the night before hadn’t been promising, but morning fog eventually burned off to reveal a calm and cloudless expanse of blue.

Assuming I wouldn’t be the only one feeling the need to go flying, I opted to make use of the cross-country capabilities of the Comanche and planned to head a bit further afield than the local practice area both to avoid traffic as well as to make sure I got a good run to get any moisture out of the oil and fully charge the battery. My assumption was correct—by the time I got to the airport the pattern was busy, with most planes headed out toward the practice area. After an uneventful start I headed off to my chosen destination out on the coast and enjoyed a smooth flight with little traffic, and once I got to the area I was heading to found it completely empty of airplanes.

With nearly perfect air and no traffic in the area, I decided to do some proficiency exercises and after some slow flight, stalls, and steep turns, headed on to the small airport nearby where I planned to take a short break and reconfigure my avionics for the return. The Comanche is not known as the first choice of airplane when it comes to precision landings, which makes it all the more satisfying when you nail one in it, so I decided having just re-acquainted myself with the slow speed characteristics of the plane that I would take the opportunity of an empty pattern to target a combined spot and short field landing. Since the airport is located next to the shore and is overall a fairly quiet airport, as usual when going into it I gave it a good look as I was on downwind for any animals and, seeing none, set myself up for a low excess energy approach.

I had already pulled the throttle and begun my flare on what felt like a great approach when I noticed what seemed to be a brownish black blob oozing onto the left side of the runway about a thousand feet ahead of me almost like an optical illusion. For a split second I wondered what it was before reflexively adding power for a go-around and raising the gear—and then deciding I wanted to see whatever it was before I came back for another attempt in case it was just some water or leaves.

I leveled off about 30 feet above the runway and very shortly later watched in amazement as the brown and black blob suddenly burst into the air—as a gaggle of around 40-50 geese! My mind raced with observations, options and potential responses: land under them… of course not, had already waived the landing and retracted the gear; low energy state, keep it flying, don’t dive below birds, houses and trees on left, no trees or terrain forward or right, crosswind from the right, don’t know if they will turn toward me into it or climb forward a bit more, get the gear up, oh my gosh they are beautiful from this perspective, but getting too close…

And then I was past them, flaps coming up, fine tuning climb power. I was 700 ft AGL and turning crosswind when it actually registered that I had just escaped a potentially life-changing encounter with nothing harmed, and also realized that in processing the events I hadn’t consciously thought about what I was doing with the airplane.

The video out the windshield from my dashcam shows a similar but different tale. There is a clear runway on final. 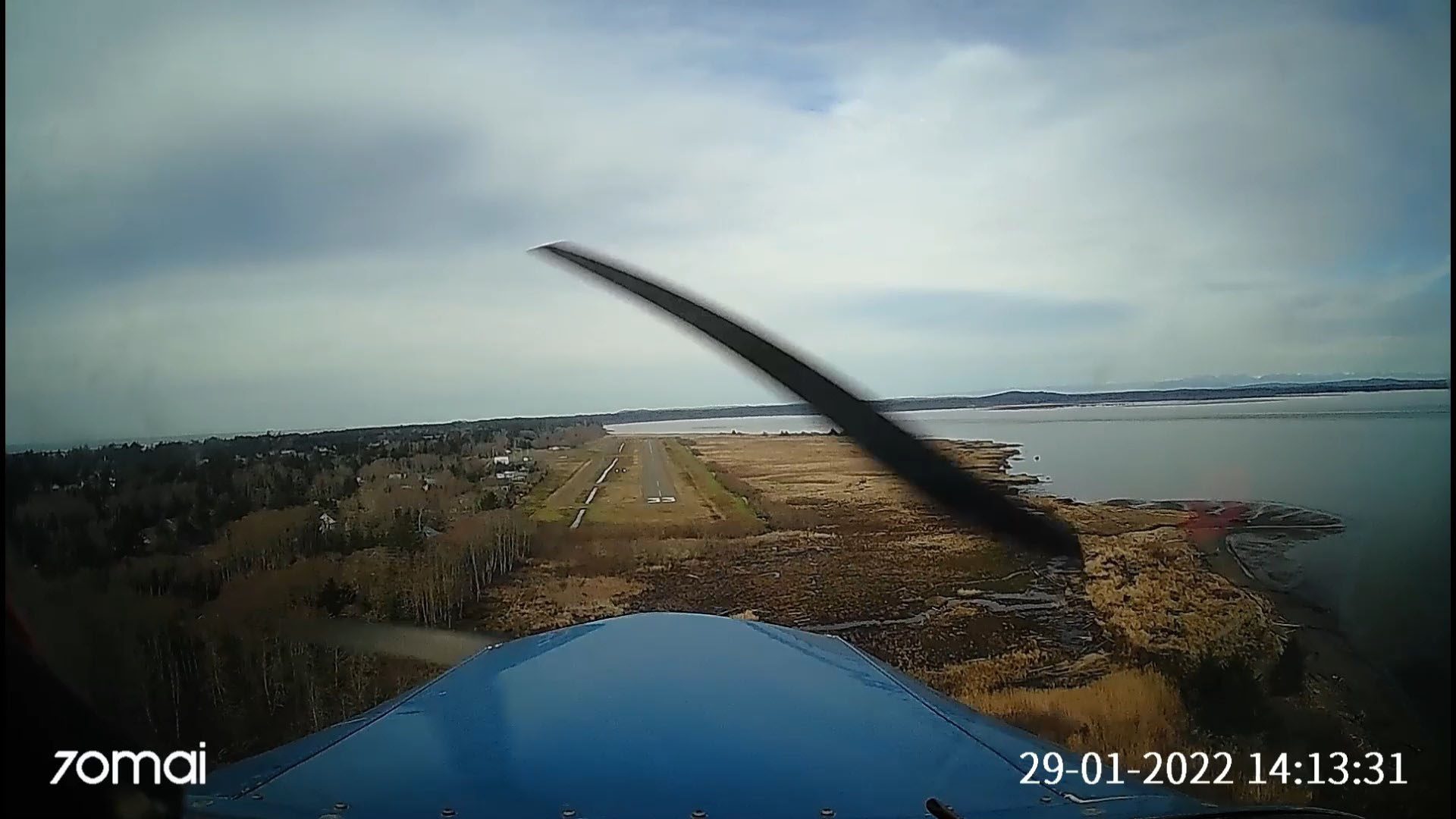 Just prior to the nose coming up in the flare the first splotches of brown appear on the runway. 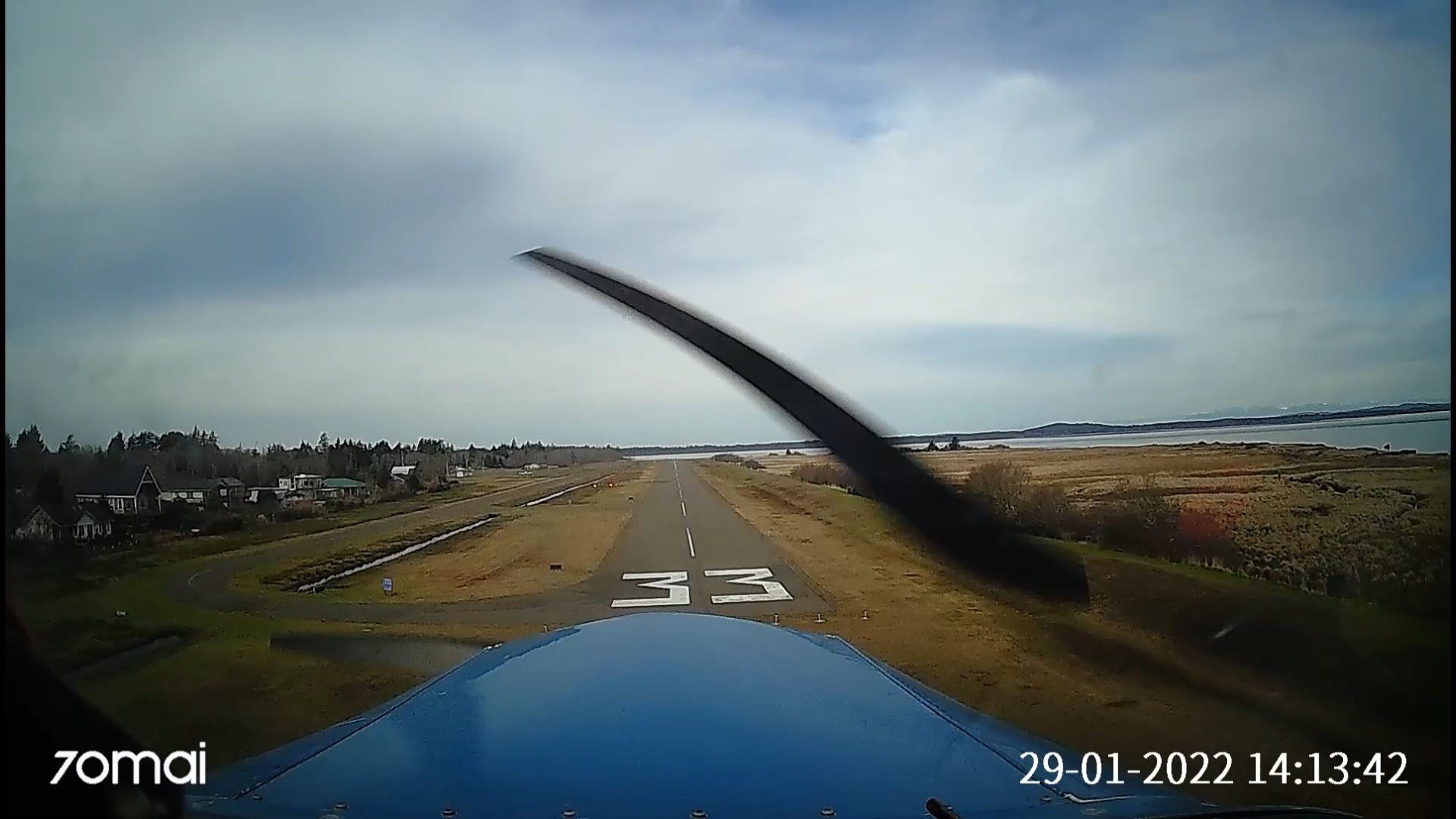 The nose comes up, more brown is appearing from the edge of the runway, and just before the point where you expect to see the shake of touchdown the prop speed changes and the nose pushes down from the flare into a slight climb attitude. The geese take flight just about the point the blob becomes individual animals in the camera resolution. For roughly a second as the startle factor effect occurred nothing happens beyond the geese climbing into the path of the oncoming airplane and spreading laterally, then there is a gentle turn to the right, the closest goose slides back behind the wing about 15 feet outside the tip and at the same altitude, the nose comes back around to parallel the runway, and eventually a climb starts. 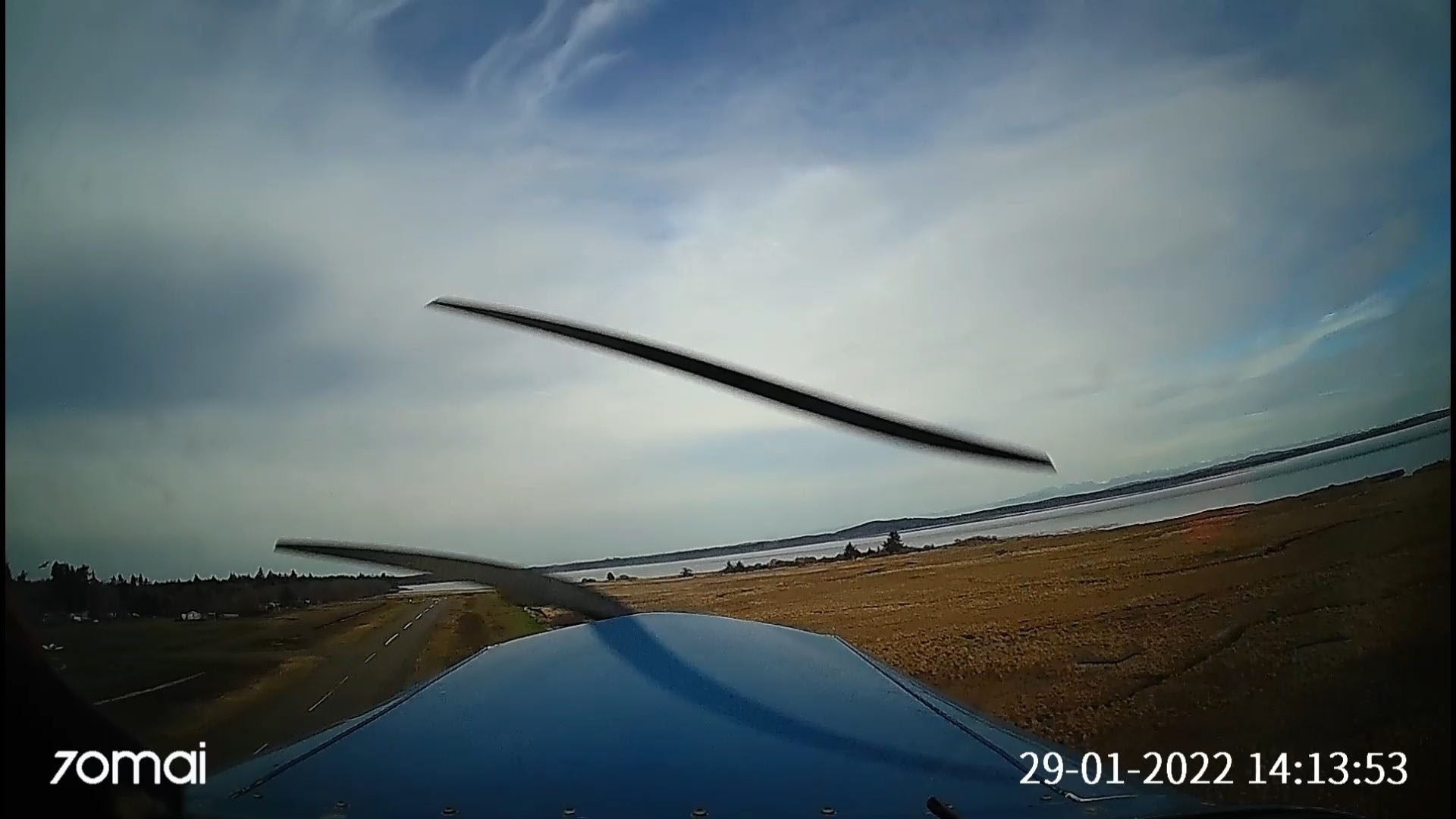 Based on essentially having operated the airplane by memory item recall and muscle memory instead of conscious activity, I had anticipated that the video would show a different picture; one of further advance notice of the birds, a less controlled response, a bit more chaos. Instead, it appears that the adage of “In times of need you sink to the level of your training and the ability of your practice” held true.

As a student pilot struggling with operating low and slow, my instructor tossed an exercise at me from his crop dusting background and had me “spray” the runway, starting about 100 feet up and at approach speed and gradually working down in altitude and speed until I could go down the length of the longest runway in our area (a 13,000 ft former airbase) staying within a few feet of the runway and just above touchdown speed doing multiple touch and gos with minor throttle adjustments only, followed by a pass in the same basic condition doing shallow S-turns down the length of the (wide) runway. This exercise and the confidence it gave me in being able to positively fly the airplane in flare-like conditions served me very well when I transitioned to the Comanche (and its reputation to float excessively if you bring excess energy from the approach combined with not responding favorably if you try and force it on before the wing is ready to stop flying) and again in this case.

In the space of less than 10 seconds I went from mentally fully focused on and committed to nailing a landing on a clear runway to climbing away after dodging what could have easily been a significant incident if not worse. Neither the plane nor the goose / geese would have come off well from the encounter, and I highly doubt any part of the Comanche was certified to handle multiple concurrent goose strikes. Without looking at the panel I knew I was low, slow, draggy, and behind the energy curve; this was not the time to yank the nose up and try to out-climb the birds. Nor was it the time to aggressively maneuver in avoiding them laterally—I was obstruction free forward and to the right so had plenty of time and space to work with. I also had the knowledge that the airplane will fly fine if you let it, even in the state that normally ends with the wheels finding the runway. Edwina Sharp
After over a decade as a flight test engineer and test director, Edwina started building a Vans RV-14A in 2017 in a successful bid to finally have a reason to learn the art of flying as a complement to her knowledge of the science of flying, earning her Private Pilot certificate in 2018. A job transfer to Seattle greatly slowed down progress on the RV build and directly led to the purchase of “Fiona,” a 1960 Piper Comanche 180, in order to have the speed and range to get back and forth to the RV build location in southern California in a comfortable day of flying as well as to dial things back a bit and enjoy the sights that flying the Pacific Northwest has to offer.