Blog - Latest News
You are here: Home1 / Article Archive2 / I was there3 / Turbulence education

I know some of you will snicker at my naïveté, but sometimes confession is good for the soul, so here goes.

I spent most of my flying days on the plains of West Texas. It’s an interesting place to fly. Weather wise, you have all four seasons, and sometimes you get to experience all of them on one day. Wind is always a factor. When you see thousands of wind turbines spinning below you, and when you occasionally see Boeing and Embraer coming to town to do crosswind testing on their new designs, you know there is wind. If you don’t learn to fly in the wind, you just don’t fly much. A normal forecast would be winds from 220 at 15-25, and it wasn’t uncommon to add 10 knots to those speeds. There was a runway 17/35, or 8/26. Do you prefer a left or right crosswind? Pick your poison, but you’re going to make a crosswind landing. 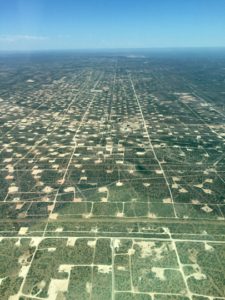 The only thing to break up the flat terrain of West Texas is oil wells.

Summer temps were hot. Mid to upper 90s were common, and overnight temps rarely got below the mid-70s. I know. You people in Arizona don’t think that’s hot, but it’s still toasty. Thermals spiral up from the dirt below that cause bumps bad enough to knock the fillings out of your teeth, or so it seems. Sometimes I wondered how the wings stayed attached. Every year, the Air Force Academy brings their gliders and students down to have fun in the thermals, and I guess if you’re flying a glider, it is fun. Otherwise, not so much. On top of the thermals, throw in the wind, and you can have one of those days when you wondered why you ever thought flying was fun.

Of course, there are positives. Since most of the terrain is as flat as a pancake, an emergency landing should be a non-event. Early morning flights can be glorious. Navigation is no problem. You can see forever, unless the dirt is blowing.

I didn’t always stay around my home base. I flew all over Texas, up to Denver, to New Mexico, Kansas, Oklahoma, and even to Kentucky once. I thought I was an experienced aviator. I spent a lot of pleasant hours, and a few unpleasant ones, viewing the earth from that vantage point, and I wouldn’t trade those times for anything.

A few years ago however, fate and family moved me to the hills of East Tennessee. Circumstances delayed my getting back into the air for a few years, but recently I joined a flying club and have started seeing the hills, lakes, and trees of East Tennessee from the air. After viewing it from the ground for a while, I was more than ready to see it from above.

While I could hardly wait to see it, I did it with some trepidation as well. I knew the emergency landing spots wouldn’t be as abundant as I was accustomed to, but now that I’m in the air, I see that they are available. The place is beautiful, but I’m still having to get used to having hills in my windshield when I take off, a hill blocking a view of the runway when I land, and not being able to see where I’m going from 50 miles away. GPS is more than a luxury out here. But the most surprising aspect of it has been something I never expected, and that I had initially actually looked forward to.

I mentioned the wind in Texas. There is virtually no wind in East Tennessee. In fact, if the wind ever gets up to 30, a high wind warning is issued. A 30 mph wind in Texas was Tuesday or Thursday. Here, it’s a serious threat to humanity. “This will be a snap,” I thought.

And then I got in the air. I will admit that getting in the air and getting on the ground is a breeze, no pun intended. You don’t have a lot of wind to deal with the majority of the time in takeoff and landing. I’ve only had one landing where the wind was blowing, and it wasn’t bad. What surprised me, however, was that even with an almost calm wind on the ground, in the air it can be rougher than a cob, even on cool days. A 50 degree day with calm winds in Texas would have been as smooth as glass. Here it can border on moderate turbulence. 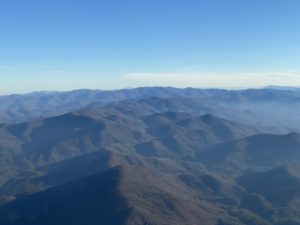 Those hills can cause some nasty bumps.

The first few flights, I thought maybe I had just been unlucky. But then, this scenario became the norm. On the last flight I took, a Saratoga had taken off about the time I got to the airport. My son was going with me and I was early so I had to wait on him. It wasn’t too long before the Saratoga was back. “That wind is horrible,” the pilot said as he exited the plane. Wind? I thought. It’s hardly blowing. Maybe 10 knots. What wind is he talking about?

When I got In the air, I found out. I saw several 30- and 45-degree banks that I hadn’t asked for. It was not a pleasant day to be flying. Climbing higher didn’t seem to help. I got up to 6000 feet, which here is a mile AGL. Still rough.

Confused, I decided to ask a local. The instructor I had flown with to get checked out was my first choice. He obviously flies a lot and is also an air traffic controller. When I asked him about it, he introduced me to a term I wasn’t familiar with: mechanical turbulence. It made sense when I thought about it. When you see water flowing over rocks in the bottom of a stream, it generates a turbulence on the surface that can often be seen if the rock is large enough.

In the case of the bumps I had been feeling, the fact that the air may be calm at the surface is no guarantee that it isn’t moving 50 feet up, and if it is, and it hits some of those hills I see in my windshield, that could easily create turbulence as the air flows over and around those hills. The wind isn’t going to move the hill. It’s the other way around. These aren’t tall mountains. More like 300 foot hills in most instances. But it’s obviously enough to change the airflow with a less than pleasant outcome. I never dreamed terrain would make that kind of difference, but it obviously does.

So I learned something. Understanding it doesn’t make it less bouncy, but at least I know the dynamic, and armed with that knowledge, perhaps I can start to pick paths where the flow might be more gentle—or maybe not. Time will tell. But the view from above makes it worth it. I’m sure there are other places in this nation where this old flatland flyer would be like a duck out of water and find he has a lot to learn from the locals. For now though, I’m concentrating on learning this one, a task I never dreamed would be so challenging.