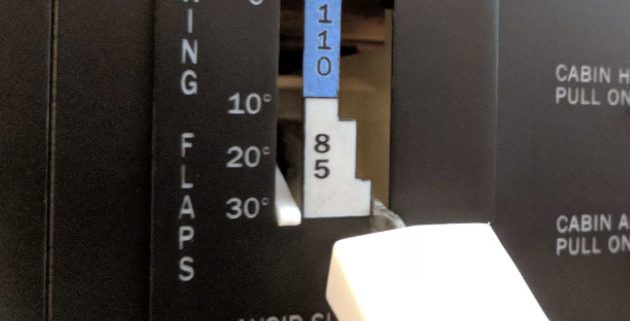 As we lifted off during the touch-and-go, the aircraft swerved oddly. There wasn’t much crosswind. Mike was flying and commented, “maybe the tire blew.” He’s cool as a cucumber.

During the run-up an hour earlier, another pilot in the run-up area announced that our nose wheel looked low. I hopped out and it looked OK to me, but I did not have a pressure gauge (mistake #1). We elected to fly the Cessna 182 using soft field technique to minimize the weight on the nose wheel—good practice anyway. 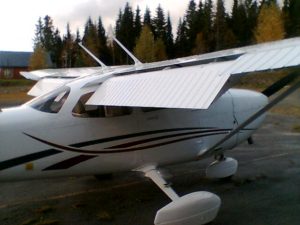 Those big Cessna flaps are good at their job: drag.

As a new CFI I had little more experience than Mike. He was an instrument-rated private pilot, working on his commercial ticket. We were flying buddies, so I watched him fly and gave tips here and there. I rarely touched the controls. In retrospect, maybe I was a bit too casual.

We had already done some lazy eights and found a quiet airport to practice power-off 180 spot landings. Mike was high and fast on this approach and so we landed long.

During climbout after that touch-and-go, both of us were thinking about the nose wheel, not about flying the airplane. How were we going to determine if we still had a nose wheel? How and where were we going to land? We agreed we’d land at our home airport, which has long runways and repair facilities.

During this discussion, we were climbing at a normal climb attitude. Neither of us noticed the airspeed decreasing. We finally clued in that the view outside was wrong. We were above the houses ahead, but far lower than normal. I glanced at the Garmin G5 flight instrument and saw 37 knots. My first thought was, why are we still flying? Why is there no stall warning? Mike pushed the nose down a little.

Something was really not right, and it was not the tire. The engine was running normally. A quick glance back and we noticed that the flaps were still down all the way—at 40 degrees. The lever was up, but the flaps never went up.

I immediately said, “you fly, I’ll debug,” but I think Mike was already too focused on the problem and didn’t hear me. He discovered the tripped circuit breaker, reset it, and the flaps came up. The time from discovering the issue to solving it was a few seconds. Normal climb resumed immediately, but I bet it was a bit loud in the houses beneath.

We landed uneventfully at our home airport. Turned out the nose wheel was just a little low.

After the flight and since, we’ve done some soul-searching because this incident could have ended badly. How could we have prevented the scenario and done a better job handling it?

With full flaps, a Cessna 182 will take off with a level or slightly nose low attitude. The flaps increase the effective angle of attack so that there is enough lift to take off without rotating. That’s why the nose wheel was still rolling on the ground when we took off. Essentially the aircraft “wheelbarrows.” Since the nose wheel is still on the ground, any rudder pedal movement causes a swerve.

Even though the nose wheel was fine, we had enough doubt about it that it affected our thinking during the flight. It was the distraction that almost turned a simple failure into disaster. 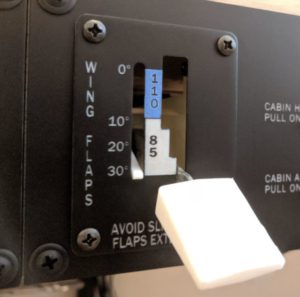 That white indicator is important, but hard to see.

That tiny white flap position indicator to the left of the control turns out to be important. From now on I’m going to check it, or the actual flaps, during every touch-and-go. I will no longer trust that the flap control will always work.

Second, there is a reason that newer Cessna 172s and 182s only provide 30 degrees of flaps. That last 10 degrees provides mostly drag and severely reduces climb. The many of us flying old Cessnas can reduce risk by not using 40 degrees of flaps for touch-and-gos or anytime a go-around is possible (which is always). If a steeper approach is needed, a slip is a better tool. Or just go around and fly a better approach.

Finally, this incident highlighted to me the added risk of touch-and-gos. In turbulence or crosswinds, it is not easy to check that the flaps are up while also controlling the aircraft. If flaps are electric, you have to think about them twice—once to raise the control, and a second time to ensure it actually worked—by that time you are probably airborne. Confirming the flap position requires you take your eyes off the runway. I plan to not take my hand off the flap control until I have verified flaps up, then move my hand quickly back to the throttle. If only we had three hands.

For the instructors out there, you should check the flaps while the student does the touch-and-go. It’s pretty common for the flaps not to be all the way up when the aircraft reaches flying speed, but the goal should be to hold the aircraft on the ground until flaps are no more than 10 degrees. You don’t have the controls to feel when they are not responding normally. If you sense a skittering, flat takeoff then recheck flaps.

We never practice this

When practicing power-on stalls, we are accustomed to a very nose-high attitude. It seems this could never happen by accident, because it is so obviously nose-high. But the power-on stall is practiced with flaps up.

I have never once practiced power-on stalls with flaps down. With full flaps, the aircraft attitude is normal and the engine sound is normal. Outside references provide little indication that anything is wrong, until you notice you are not gaining much altitude. Mostly likely the airspeed is rapidly decreasing while you hold that normal attitude. It does not look like a stall is about to happen.

It goes without saying that on climbout it is critical to monitor the airspeed. Distraction caused both of us to not notice airspeed decay for far too long. We are lucky that this particular 182 has a STOL kit and was still flying. Losing control of airspeed is the one unforgivable sin in aviation. We got away with it this once.

We were also lucky this was a lightly loaded 182, not a 172. At over 5000 feet, without the excess horsepower we would not have been climbing at all. It also happened to be a winter day. If it had been a hot day, the climb would have been marginal even in the 182.

Hasty action almost made the situation worse. When Mike reset the circuit breaker, the flaps immediately came all the way up. Raising the flaps raises the stall speed, so at low airspeed it could have triggered a stall. The flight manual recommends 60 knots before raising flaps. In retrospect, we were still climbing slowly, so we should have been more deliberate in ensuring a specific airspeed, set the flap control to the position the flaps are actually in before resetting the circuit breaker, and then gradually raising flaps. Patience is difficult when low over houses, and foreseeing a call to the authorities reporting you.

When there are two pilots aboard, somebody needs to remain flying the aircraft. Both can’t go heads-down to troubleshoot. It’s basic crew resource management. I always talk about who is PIC during the pre-flight safety briefing, but from now on I will also talk about who will do what in an emergency situation.

Mike is now a commercial pilot, my first student to pass a checkride. I think I learned as much as he did. Adrian Nye
Adrian Nye caught the airplane bug flying control-line and R/C models in Connecticut as a teenager. He studied Aeronautics/Astronautics for two years at MIT and graduated as a mechanical engineer. While writing programming books he earned his Private Pilot and Instrument rating in the DC area. He fondly remembers flying over Air Force One at Andrews AFB back when that was allowed, flying the VFR corridor down the Hudson river in NYC alongside the skyscrapers, and a trip island hopping the Bahamas in a Mooney. He later worked with a group of four people at CarterCopters to build and fly a prototype 4-place gyroplane under a NASA grant that was the first to break the Mu-1 barrier (rotor tip speed to aircraft forward speed of 1). In 2019, after a long hiatus from flying, he scraped the rust off and got his Commercial and CFI certificates and is now working on CFII in the Denver area.

A father and son non-Oshkosh adventure