Blog - Latest News
You are here: Home1 / Article Archive2 / I was there3 / The problem with emergencies is they are difficult to schedule

Raphael and I departed Long Beach Airport (LGB) in a rented Grumman Traveler after requesting a tower in route to Catalina Airport (AVX). A quick climb to 4000 ft put us “feet wet” as we crossed over the shoreline. The crossing would keep us exposed to a ditching for about 15 minutes and onboard flotation gear and IFR radar coverage from departure control provided a high safety factor.

The other school of thought in crossing the 23 miles across is to climb above 9000 ft, thus providing a safe gliding distance to land or “feet dry” from any point of the flight. To each his own. 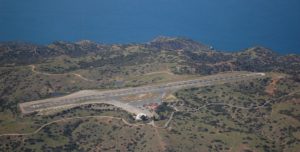 The “airport in the sky” has some intimidating approaches.

On a good day, like this one, the view is fantastic. On previous days I have reported the visibility at 100 miles—looking back off the right wing, Malibu was visible as were the other Channel Islands. This day was just as good. On not so good days, there were two VOR approaches.

The airport is non-towered so once we reported feet dry and cancelled IFR, I announced our intentions on 122.7. I received a “No reported traffic” from the airport attendant and entered downwind for runway 22. Field elevation is 1600 ft and final approach is over a cliff, with a steep drop to the shoreline below. The runway 4 approach drop-off is more gradual but into rough terrain. Neither approach is not a good time to be short on final, so the best procedure was to hit the numbers. The alleged 3000 runway length was also a good reason not to land long.

Catalina Airport at that time was in desperate need of some tender loving care. Supplies were flown in by DC-3, and years of hard use had taken their toll. Originally constructed just before World War II, the runway was not unlike landing on an inverted bowl—it did have a hump midfield. Taking off from either end provided for a slow acceleration, but about 3/4 down the runway, passing the hump, did provide some assistance on takeoff.

There were of course no tie downs, so we improvised by employing two of the local rocks found around the ramp as wheel chocks. The next stop was to pay the outrageous landing fee of $7.00 (no touch and goes please) from the same man who “cleared us in” and provided traffic information.

We proceeded to the diner, a great place for a $100 dollar hamburger flight. Buffalo burgers were on the menu as there was a wild herd roaming the island. One or two must have wandered too close and found themselves on the menu.

A large stone fireplace warmed the dining area and big band music could be played by request. The view was terrific: we were fortunate to see local bison roaming close by, possibly looking for their missing relatives now on the menu.

It was all over all too soon, and we ambled back to the waiting Grumman and after a walk-around inspection, a weather brief was made. It was severe clear on all directions. We taxied out to runway 22, checklist in hand. This was not a not a simple task, since the hastily repaired potholes and repairs from constant traffic in and out did keep you on you toes. Being close to a 1600 ft drop-off does keep you alert too.

Raphael, my partner in crime and co-pilot, announced our taking the runway and takeoff. As I always do, I did a final set of the DG and went to full power. Takeoff acceleration was slow as expected, as it is somewhat uphill. Moreover, the opposite end of the runway is not visible from the departure end.

Catalina Eddy is the name given to a local low pressure that forms in and around the Channel Islands, sending cool ocean water from the Pacific over the warmer land. This forms clouds and at 1600 feet it fogs in the airport. As we were passing midfield and just coming up on Vx—but not quite yet—we noticed the last half of the runway was obscured by clouds and fully IFR.

Weather around Catalina can change quickly.

Quickly passing the halfway point and accelerating is one of the times in aviation where you’re forced to make a decision and live with the results. Hesitate to decide, or make the wrong one, and you will find a decision has been made for you. Unfortunately, several pilots in the past have decided to abort the takeoff at this airport and attempted to stop. Their efforts ended in tragedy. I do not know what their reasons were for trying to abort the takeoff run. There are several possibilities: it could be from lack of experience, because they were not instrument rated, would not enter IFR conditions, I cannot say.

Just passing Vx I placed my hand firmly over the throttle to keep it from being retarded and said, “We are going.” We went IFR, rotated and climbed out. As we both had flown out of the airport before and were familiar with the area, we knew there were no obstructions and the terrain as I had said was a steep decline down the shore below. All my copilot said was, “It’s VFR on my side.”

We maintained orientation by turning the OBS and using an old ADF trick. I routed the OBS to a “from” and centered the needle. I knew we were close to the VOR station, and re-centered the needle every ten degrees. The time in seconds to go ten degrees equals time in minutes to the station. Climbing out, we were indicating 90 knots and it takes 40 seconds to go one mile. That gave us a very rough position of how far were on the upwind and when we might be feet wet. Yes, I know I could have held 90 kts, watched the sweep hand and tried to keep track of the time, but old habits die hard. It also let us know where we were in relation to the VOR if we did not find the top of the overcast. Later that month I invested in a Garmin 195, which would have made all the mental gymnastics unnecessary.

The Grumman popped out to severe clear at 3500 ft. As we turned left towards the VOR station, I noticed the IFR condition was just off the midfield and down to the beach—very localized. Catalina Eddy had done us wrong.

The moral: the problem with emergencies is they are difficult to schedule. (I may consider adding that to my list of “The Rules of Flying.”) So, the best advice is to stay current.

I am happy to report Catalina Airport received a grant some years ago and with the support of the USMC, moved a lot of construction equipment and personnel across on their hovercraft and rebuilt the runway. There is no longer a hump and the runway is visible from both departure ends. However, the landing fee is now $35.