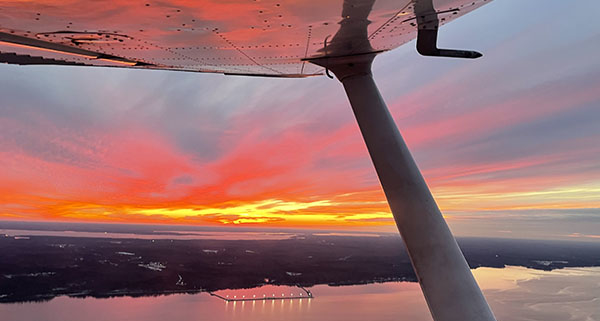 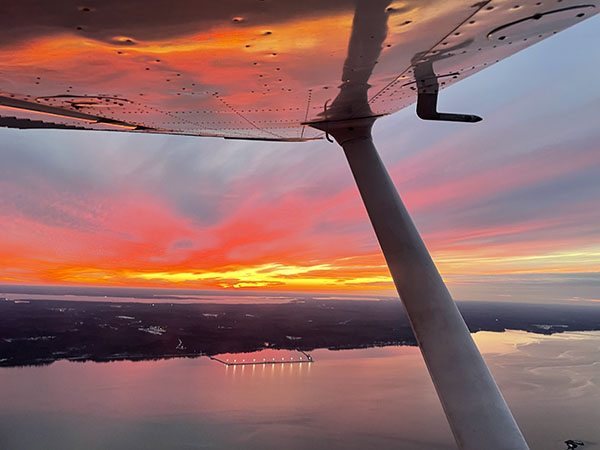 The view: Looking west from over the York River in Virginia

The mission: Teaching a CFI to be a CFII—we took a pause to appreciate the beauty of the evening.

The memory: Sometimes you gotta look outside and appreciate the beauty of flight and the freedom it provides. Thomas Dorl
Tom Dorl grew up in New Jersey and learned to fly at a young age. His father was an A&P and engineer and he remembers taking flights with him at a young age. Tom learned to fly at McGuire AFB, NJ, and attended college in Ohio, majoring in aerospace technology. He was commissioned into the USAF as a 2LT and attended pilot training at Vance AFB, OK. Tom went on to fly combat search and rescue missions in the HH-60G Pavehawk, deploying to numerous combat operations and saving many lives. Tom retired from the USAF after 25 years of service and continues to fly, instruct and serve as a board member for NAFI. Tom has accumulated over 4000 hours of flying fixed and rotary wing aircraft with over 1450 hours of dual given. He is an active CFI/I and Check Airman at a Virginia part 141 flight school.