Blog - Latest News
You are here: Home1 / Article Archive2 / I was there3 / Smile: you’re on (aviation) candid camera

With the exception of the last of these stories, I have first-hand knowledge for each of them involving my good friend, Charlie Yates. The last story was told to me by Charlie’s son at his funeral.

Charlie and I were both lieutenants flying OV-10 Broncos as Forward Air Controllers (FACs) in Southeast Asia. Charlie initially operated from Da Nang Air Base in Vietnam with the 20th Tactical Air Support Squadron (TASS), known as the “Coveys.” On his missions, Charlie used the callsign of Covey 25.

I met Charlie when the Coveys were disbanded as US involvement in Vietnam ended in January of 1973 and its pilots joined the 23rd TASS, known as the “Nails,” at Nakhon Phanom Royal Thai Air Base in Thailand. My callsign was Nail 49, Charlie’s became Nail 50. He was a good friend to all and was known for his video productions as well as for the pranks he pulled. 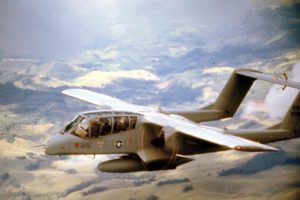 FACs flying the OV-10 Bronco in Southeast Asia needed a sense of humor.

On YouTube you can watch a 45-minute video Charlie produced that accurately depicts the FAC mission in Southeast Asia. Although grainy, as it was filmed using an 8mm camera, the radio chatter was all recorded during actual combat missions. Watch it to the end and you will see my name appear in the credits when Charlie filmed our squadron’s OV-10s with the pilots’ names painted on them. One name you will see is Lt. Tully Baskum, a pseudonym Charlie often used.

Charlie always carried a harmonica with him and would use it when giving a DF steer to help rendezvous with the fighters sent to support him. A national magazine reporter for either Time or Newsweek recounted how he had overheard a harmonica being played on the radio during the last day of the US involvement in Cambodia (August 15, 1973). We knew it was Charlie as the reporter stated he had heard “Turkey in the Straw” being played; that was Charlie’s favorite tune.

One day, Charlie pulled off a memorable prank when he was flying over the Ho Chi Minh Trail (HCMT). The HCMT was a system of dirt roads through the jungles of Laos over which the North Vietnamese moved men and materiel to the battlegrounds of South Vietnam. We Nail FACs called ourselves the Laotian Highway Patrol; our mission was to find and interdict the materiel and troops moving along the HCMT.

On that day, Charlie contacted the Airborne Battlefield Command and Control Center aircraft (A-B-Triple C – an EC-130 with the callsign of “Cricket”) to report that he had spotted a hen-way moving along the HCMT. The controller asked for the location of this hen-way, which Charlie dutifully passed using the Universal Transverse Mercator coordinate system. The controller told Charlie to stand by as he confirmed the target, its position, and got some fighters headed his way to bomb it.

The radio then went silent as Charlie waited. After a minute or so, the controller came back on the air and said, “Nail 50, Cricket here, with a question. What’s a hen-way?” Charlie cheerfully replied, “About a pound and a half.” He then chortled over the radio. The radio went silent for a few moments and the controller finally responded, “OK, Nail 50, we got it. We’ll cancel the strike.” Cricket never lived that one down; we FACs who overheard this exchange made certain of that as we gave them numerous “Attaboys!”

Charlie’s most memorable prank came years later when he was stationed in Alaska flying the F-15 Eagle during the Cold War. During that time, the Russians tested our air defenses by flying one or more of their bombers just outside of the Air Defense Identification Zone (ADIZ) surrounding our sovereign airspace. By intercepting and escorting them along the ADIZ border until they had to return home, we let them know they weren’t going to get away with these provocations!

The Eagle pilots flying these intercepts sat alert at Galena (GAL) or King Salmon (AKN) airports and carried cameras to capture images of the bombers they intercepted. These images were exploited by intelligence analysts to determine if the bombers were sporting anything new or unexpected – things such as new antennas or new weapons being carried externally. 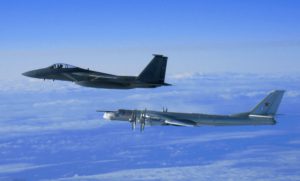 The Russians carried their own cameras to capture images of our interceptors for much the same reason. What they didn’t count on was what happened when they took a picture of Charlie’s F-15 as he made one of these intercepts over the Bering Strait.

After intercepting the bomber, Charlie tucked in close to the observation bubble on the fuselage of the bomber through which the Russian crews were known to take their pictures. As the Russian cameraman readied his equipment, Charlie turned his head away momentarily to raise his helmet visor and unhook his oxygen mask. When he turned back, he could see the shutter flicking open and closed as the Russian operator took numerous pictures.

I can only imagine the surprise when those pictures were developed and shipped back to Moscow for their intelligence operatives to pore over. With his head turned, Charlie had slipped on a pair of what are commonly called “Groucho glasses.”

I’m sure the Russians knew then that the Cold War was lost because, “Those American pilots are CRAZY!”