Blog - Latest News
You are here: Home1 / Article Archive2 / I was there3 / Requiem for a flight bag

I recently moved, again, and with so many moves under our belts as a career military family, many things remain remembered but unseen in boxes for years. I imagine myself an archaeologist of a kind when I make these discoveries while digging through a dusty box, and some of those finds conjure emotions and memories that are quite powerful.

I am a civilian now, and a civilian pilot both professionally and recreationally. When I first got out of the military, I purchased a fancy flight bag that I thought went perfectly with my newfound civilian aviation career and dress code. Many of us pilots go through flight bags as one would any other functional accessory, as a person goes through shoes, sunglasses, or watches. One for every occasion and “look.” My new flight bag is high tech, with lots of zippers and pouches. A place for everything and for everything a place. Just like I have consistently upgraded my training, certifications, and aircraft throughout my career, so too had I upgraded the toolbox of my trade. 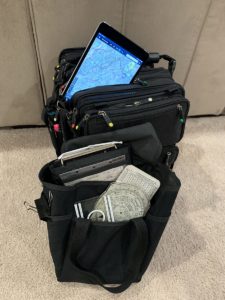 What story does your flight bag tell?

But then I opened that box, and the flood of memories that came with it. In 1989 I was a WOC (Warrant Officer Candidate) going through Initial Entry Rotary Wing training with the United States Army and was issued a small pilot bag just big enough for a mechanical E6B, a kneeboard, maybe a couple of charts and approach plate books, and small side pouches for a few pens, pencils, and a flashlight. Everything the neophyte military pilot would need learning their craft.

But as our class progressed with training, we often found that this simple, open-topped nylon bag was not sufficient. Thus, at prices seemingly high for what a WOC could afford, we purchased larger ones at the pilot store just outside the gates of the base. Once we got the privilege of venturing so far, that is. The larger bag was a new badge of honor and status symbol as we progressed through the dubious rank structure of WOCs. While few things but some lifelong lessons and experiences survived that time, the investment in that “new” bag served me a career and lifetime of significance.

This bag, while an improvement, was also simple. A little larger, a few more pockets, and a hook-and-loop fastener flap to keep it all in. Still soft-sided but with larger hand loops that often found themselves attached by a carabiner to a helmet bag or cockpit seat post more than my hands. And while still black, the bag that presented itself from the dusty box was itself a little faded, worn from use, and probably still retained a little of the dust from countless LZs both here and abroad. Maybe a lot like me now on the downhill, yet still shallow, slope of a long and fantastic career.

In it was still an E6B, a long since retired bent and scarred kneeboard, a couple of long dried out pens and highlighters, and flight mission cards from one life-changing helicopter flight. I reverently picked up the old, beat-up military flight bag and sat it next to the clean, bright new techy flight bag I had recently purchased, admiring both for their utility and purpose. Where had it been for so long? The juxtaposition of the two also transported me through time. My flight bags had progressed just as my vocation.

That old flight bag obviously still held more than those few shelved tools. From it I could still smell the chicken coops and Alabama pines from the Advanced Skills final phase of flight school where the more practical applications of tactical flight were passed on by men who had used them to survive the Vietnam War. The bag still had wrinkles from being crammed into the front and back cockpits of the AH-1F, an area that didn’t leave much room for luxuries. I fondly, and almost comically, remember how complex I found both aircraft, especially now that I have flown big jets with glass cockpits and flight management systems.

I should have put my “chummed” map in that loyal bag instead of watching in disbelief as the chart became litter over eastern North Carolina, sucked out the infamous “Dairy Queen” sliding window of the UH-60A during my first tactical Pilot-In-Command checkride. There’s even still a little hint of sweat in the nylon from experiencing my first true in-flight emergency after picking up a brand new UH-60L from the Sikorsky plant in Connecticut. And the seams are a little more stretched from when it was packed with more pubs and tools as I progressed to an Instructor Pilot and Instrument Flight Examiner.

Just as my mind and experience grew through the constant learning environment of aviation, the tools that the bag provided for me continued to expand. Yet, always essential, faithful, and relevant when I briefly learned to fly the CH-47D in preparation for the pinnacle of my Army Rotary Wing career, acceptance into the unit that flew the MH-47E. Everything I ever needed for flight was contained in that bag, changing according to the missions and education I received, but always with me as if a part of my pilot-anatomy. If I was planning, flying, or teaching, that bag and the tools-of-the-trade were always within reach. And again, just like the mind that continued to develop, it held all the things that were important to a safe and successful flight. 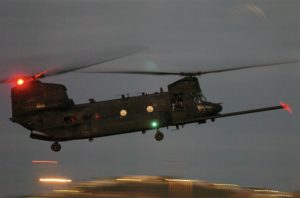 For military pilots, a flight bag is a companion during some tough times.

But the bag didn’t only carry pilot stuff. It sometimes carried extra ammunition and even grenades in combat, those items you want but hope to never use. It carried water bottles and granola bars for long flights, and even carried widemouthed bottles that were needed in knee-knocking relief when it was impossible to get out of the seat. The bag didn’t just carry knowledge, it carried sustainment. And the only time it was separated from me was when we were shot down by enemy fire in Afghanistan. In a miraculous story itself, it survived as I did. The bag was returned to me not much the worse for wear, but now we were even more connected as my blood was intertwined in its fabric.

The bag was still with me as I became an Aviation Combat Forensic Officer, assessing onsite in combat the loss of other aircrew shot down in service to their comrades and country. It traded its flight content for other tools needed by an incident investigator but was still just as adaptable, purposeful, and strong. It carried items and evidence from those locations to a safer venue where we would put the aircraft back together, lending its contents to the reconstruction of events for others to learn from. And a few times it was the hallowed portage recovering the shattered remains of heroes and their memory.

I bucked the trend and carried it on to the fixed wing phase of my career, where a flight bag, kneeboard, and E6B were shunned and ridiculed in the pressurized comfort of a hermetically sealed, headset cockpit. I admit that I did succumb to peer pressure, trading the kneeboard for the more “professional” clipboard, but didn’t fixed wing pilots still need to carry stuff? I surely did, and the flight bag continued to fly wingman from low-level to the flight levels, being the Passepartout of my travels around the world.

In less chaotic, happier times the bag was dumped to bring back memorabilia to my family from my travels. My daughter loved snow globes as a young child and more than a few of the collection have been shaken under that flap. It even served as the perfect size to carry toys and items to occupy my kids on long car trips, as they would pass it back and forth to grab just that perfect entertainment item. Toy soldiers and airplanes for my son, stuffed animals, small games, and DVDs packed its sides and stalwartly stood the abuse of being in a tug-of-war between children. It tackled all this with the same sturdiness that held it together in flight and fight. The old flight bag was part and parcel of my life, integral to my being in peacetime and war. And like me, it had a personality and capacity dictated by the environment it was in.

Too many memories, people, and experiences that can be shared in this short note wafted out of that bag like a genie rubbed out of a bottle. A flood of emotions, from happy to sad, victories and tragedies, those things learned and reminded, all the things that make for a rich life, had been held for me in that bag. Then opened to me as a wonder as with all the things it had contained over the years. I laugh to myself, pondering that Hermione’s handbag from the Harry Potter novels has nothing on mine.

As I now carry the eager newcomer for my aviation tools, trading the old fashioned, laborious ones for an iPad, the old bag, like an old soldier, deserves the playing of Taps followed by a reverent toast, and pack up all those memories for another day, another thought, and maybe another bourbon. I think of what each bag cost in terms of dollars, with the inflation of time and money, both pricey at the bookends of a career. But a flight bag in and of itself really has no inherent value. Its value, much like effort and experience, in an aircraft, a mind, or a life, is only as precious as what you put into it. Greg Calvert
Greg Calvert is a former US Army rotary and fixed wing aviator in both conventional and special operations, an ATP, Instructor Pilot, Instrument Flight Examiner, Aviation Mission Survivability Officer, and Aviation Safety Officer. He served as a plankholder of the US Army Aircraft Shoot Down Assessment Team and is also a military and civil trained aviation accident investigator. Since leaving the military, he has flown for both regional and major airlines plus worked as a university aviation safety and training director. He is currently fortunate enough to fly a helicopter air ambulance with some amazing medical professionals in Virginia, and still dabbles in airplanes with his local flying club.