Blog - Latest News
You are here: Home1 / Article Archive2 / I was there3 / Flying a DC-6 to the edge of Alaska

Wales is the westernmost town in mainland North America, located on Cape Prince of Wales. In the late 1800s, Wales grew to a vital whaling center since it was along the whale migration route to the Arctic Ocean. During the 1890s, the residents imported reindeer (domesticated caribou) to the area for food. The population was around 500 residents; now there were about 150 people in the village. The flight on this day was to deliver supplies and pick up a load of reindeer meat. The Diomede Islands are just west of Wales, in the Bering Strait. Big Diomede is in Russia, and Little Diomede is in the United States. You can see them from Wales in good weather.

We were cruising westbound at 10,000 feet just before dawn, with only dark skies ahead. I looked across the cockpit at Phil in the co-pilot seat. His eyes were closed even after a cup of coffee. The constant vibration of the engines could lull a drowsy pilot to sleep. I asked Phil to get a weather check for Wales through Nome radio, and the report for Wales got his attention. He gruffly asked what I wanted to do since the weather was pretty low in Wales. I told him that if the weather did not cooperate, we would go to Nome. I directed him to ask Air Traffic Control for a descent. We could cancel the instrument clearance when we were below the clouds. I commented the weather might improve. 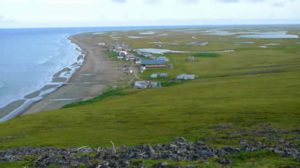 There’s not much in Wales other than an airport.

My job as a pilot required carrying sectional charts. Before each flight to a new place, I studied the sectional map showing the terrain and the surrounding area, looking for landmarks and obstacles to safe flight in marginal weather. I made it a practice to fly as low as practical in good weather, remembering what a place looked like should I need to get there in poor weather conditions. I developed the habit every time after landing and parking on the ramp to take out my map and make notes about the area. Through experience, I learned not all radio operators at a village had weather observation training. Sometimes the weather report was influenced by whether the operator had freight on the airplane and how much they wanted it. Wales was no different.

Alaskan pilots know continually changing weather in the state is a challenge. Phil gave me the report of low clouds in Wales and I was already planning my strategy. There are lots of things to consider when operating a large, complex aircraft like the DC-6. Over 90,000 pounds on landing, the airplane’s sheer weight made flying it an exercise in mass management, navigation, and crew coordination.

After flying over two hours from Anchorage, we approached Nome; I called to reduce the engine power to begin our descent. Zippy, the flight engineer for this flight, put his right hand around the four throttles, his left one on the propeller speed control lever, and deftly retarded them. He was an outstanding engineer. Knowing and operating the airplane systems, and an amiable fellow and a pleasant fellow to boot made it pleasurable to fly with him. As the engine roar decreased to a low rumble, the Pratt & Whitney 2800 Double-Wasp engines were running smoothly. They could be temperamental given their age. The engines were WWII vintage, overhauled every 2400 hours of operation. Not making abrupt power changes helped them run better and longer before needing repairs. Phil, Zippy, and I were mechanics familiar with the engines.

As we descended through 4000 feet, the weather looked good, more than 20 miles. I directed Phil to call Nome radio using the second radio, file a visual flight plan to Wales, and call ATC to cancel the instrument clearance. He called Nome Radio, told them who we were, the type of airplane, told them we would fly over the airport westbound at 3000 feet, and asked if there was any relevant traffic.

We flew on. A few miles west of Nome, the clouds turned to a solid overcast layer covering the low mountain tops, tapering lower and lower further west, requiring turning out over the ocean and flying lower. We were under 1000 feet passing Port Clarence. I pointed at the anti-collision lights on the Loran towers at the Coast Guard Station and told Phil, “always give an antenna a wide berth; there are many support cables that if a plane hit one, it could crash.”

We were even lower passing Tin City, a military radar site, the clouds were lower, and I was unsure we could get to Wales. We were only a few miles from Wales and as we rounded Cape Prince of Wales, the runway came into view. There is only muskeg and the Bering Sea until the Diomede Islands, quite a way out in the Bering Strait. I flew into Wales in good weather, so I remembered the runway orientation to the shoreline and the surrounding tidal lakes and lagoons.

There are no navaids in Wales, and you have to know where you are. The wind was out of the south, too strong to land straight in from our position. The runway direction is directly south and north. The cloud deck was pretty low, under a thousand feet, and tapered right into the tundra just north of the runway. Fortunately, the visibility was pretty good when clear of the clouds.

I quickly told Phil and Zippy my intention: if anything did not seem right to any of us, I told them, call it out, and I would abort the approach and go to Nome, with no second attempt. They both agreed. 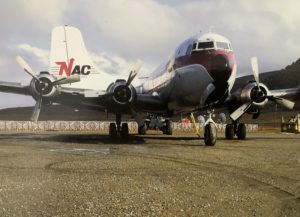 Flying a 90,000-lb. DC-6 in remote parts of Alaska requires both flexibility and discipline.

As we approached the shoreline, flying very low, I called for Phil to set the flaps to 20 degrees. I maneuvered the plane over the east edge of the runway to assess the gravel runway surface. It looked in good shape. I was there once when it was uneven from the storms channeling through the Bering Strait that pounded the Diomede Islands and Wales. I did not land the airplane then.

At the north end of the runway, I made a right 30-degree banked turn to heading 090 on the compass. Reaching that heading, I smoothly rolled the airplane into a 30-degree banked turn to the left. While in the left turn, I called for the landing gear down and the flaps set to 30 degrees. Phil asked, “what?” I repeated loudly to put the landing gear DOWN! He did it right away, setting the flaps to 30. I then told him to select full flaps while we were still in the turn. When I rolled the airplane level, the runway was right in front of us. I pulled off the power, and we touched down right at the end.

Braking on the gravel surface was as good as I could expect. I called for the after landing checklist as the airplane slowed. Phil and Zippy completed their portions of the checklist and I taxied the aircraft to parking on the ramp. Phil usually had a smart comment after landing, something like, “lucky you pulled that off,” but no negative comment this time. From my peripheral vision, I could see Phil looking straight ahead. He didn’t say anything; he just performed his after landing tasks. I taxied the airplane to the south end of the runway and turned onto the parking ramp.

A guy on the ground pointed to where to park the plane. I set the brakes, with Zippy shutting down numbers one, two, and four engines (leaving number three running for aircraft power), then turning off fuel pumps, wing heaters, windshield heat, and other systems. He stood up, putting his seat away. I waited for the Phil commentary. Usually, he catapulted himself from his seat to go to the rear of the cargo compartment and open the large door. He just sat there, not even taking off his seat belt. I turned and asked Zippy to go open the rear cargo door.

Phil finally spoke. “Where the hell did you learn to do that?” I calmly told him that I frequently used the technique to inspect a landing area when flying a bush plane, only I was operating a large airplane now requiring more precision. I suggested he write down some notes about the way I maneuvered and my sequence on his map.

Later, in Anchorage, he talked with some of my fellow pilots and told them what I did, and the response from each of them was, “did you expect Dennis to do anything differently?” I felt pretty good when I heard that. I think that day, Phil learned an essential lesson in Crew Resource Management. Phil always acknowledged we had our differences, but he made sure that others knew I had his respect. I felt pretty good. Dennis Schulze
During March 1979, Dennis was on a mission to change careers. While working on his private license, he began school to get his A&P certificates. That summer, he started working at a seaplane base near Seattle as a dockhand, later transitioning to sheet metal work rebuilding DeHavilland Beavers. He earned his Commercial, Instrument, CFI, and CFII on floats. Teaching on floats for two years qualified Dennis for an air taxi job in Kodiak, Alaska. From there to Anchorage, flying off Lake Hood. Early in 1984, he went to work for an all-cargo airline in Alaska, starting out as a flight engineer, advancing to captain in three years. He flew and instructed at the company for over 28 years, operating DC-6, Boeing 727, and Boeing 737 aircraft. Missions included flying a floatplane in the bush, a large plane to an unimproved remote runway, military radar sites around Alaska, and an international airport. Safety came first, everything else afterwards.