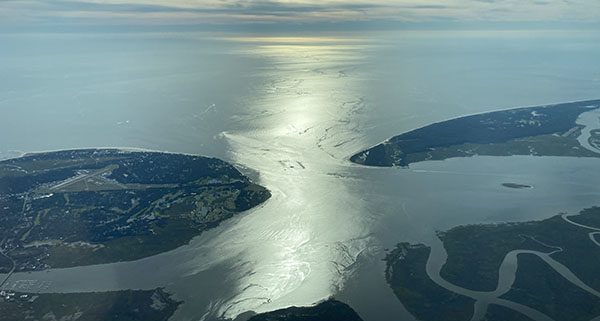 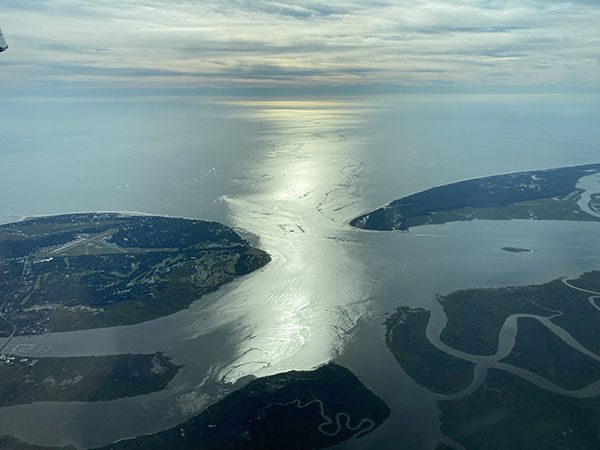 The view: Filtered sunrise reflection on the mouth of the Brunswick River

The mission: Early morning flight from North Carolina to Florida for lunch, afternoon tee time, and dinner with a friend.

The memory: This was a 24-hour trip… I cannot imagine a non-GA life. The final portion of the stricken cargo ship Golden Ray, which beached there in September 2019 (just days after my family and I finished a week’s vacation there) can be seen inside the “ropes,” mid-mouth of the channel. It was gone two days later, per another friend (esteemed aviation writer E. Cox), who noted as much on approach to SSI runway 24 (seen in left of photo) in his company’s Falcon 900, ending an almost two-year “slice & dice” removal project. Jekyll Island (09J) can be seen in right of photo. Chris Granelli
Chris Granelli earned his private pilot license in October 2017, at the ripe old age of 46, promptly purchased a sturdy 182Q, in which he obtained his instrument ticket in 2018, and the commercial ticket in 2019. He currently flies a Cessna 210N, as often as possible, with dreams of bigger/faster/higher for the next one.