The day was clear and the winds were calm—a perfect day for Mike and me to go flying in my Cessna 152. Flying around southern Wisconsin is always fun, with so much to see: the farmland, the Wisconsin River, the lakes. There was one problem: I forgot the booster seat for then 8-year-old Mike. So there he was in the right seat, not able to see over the control panel and barely able to see out his window. It didn’t seem to matter much to him; he was just enjoying a Saturday morning with his dad at 2,500 feet.

He then asked, “Dad, can I fly the plane?” Not an unusual request and he had taken the controls before in a limited way, but he was at a disadvantage now because he could not see over the panel and had no view of the horizon. Not wanting to say no, I gave him some instructions since he could not see the horizon like he usually did.

I showed him that we were on a 270 degree heading, the big “W” on the gyro compass. I told him I wanted him to do a full circle with the airplane and come back around to the big W again and level off. I showed him the attitude indicator and explained when we bank, the bank angle would be shown. I also showed him the altimeter and said as we are in the turn you will need to pull back on the yoke to keep the same altitude.

I demonstrated the banked turn to 20 degrees so he could see what it looked like and saw how the gyro compass moved. Bringing the plane back to level at the big W, I gave him control of the plane. 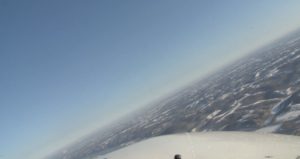 A level turn seems simple, but there’s actually a lot going on.

In flight training turning the plane in a controlled banked turn and maintaining the same altitude can be a challenge for student pilots. Going up and down is easy. You either pull back on the controls to go up, or push forward to go down. That maneuver is pretty straightforward. Making a turn and maintaining the same altitude is a different story.

When you are flying level, lift is working against gravity in a straight up and down line. When you turn, gravity is still pulling the plane straight down, but lift is now working at an angle straight up from the surface of the wing. Unless you pull back on the controls while in the banked turn to create more lift, the plane will lose altitude because gravity always wins. It is a maneuver pilots practice all the time and it can be hard to master because the longer you are in the turn, the more back pressure on the controls you need to apply. When I first encountered the maneuver in flight training, I was lucky to keep my altitude within 200 ft. of the beginning of the turn.

Here is 8-year-old Mike, beginning his turn, with my hands off the dual controls, and he can only see the panel. His eyes are glued to the gauges. As he began the turn, I told him to keep pulling back. “Pull back, pull back,” was what I kept saying during the turn. He then anticipated the need to ease out of the turn and leveled off dead center on the big W. He did this just watching the panel and didn’t lose 50 feet of altitude! I was amazed and when he asked if he did OK, I said “You did great, Mike!”

So, does my son Mike have some special flying gene? As much as I like to think that, he doesn’t. There were two key things happening. First, he had trust in me to not ask him to do something he could not do. Second, he just followed the instructions as best he could. He didn’t know it was a normally challenging maneuver in flight training; he just followed the instructions and nailed it.

There is an important life lesson here for all of us to recognize. How many times have we attempted to do something that we were told is difficult or we were afraid to get out of comfort zones? We can talk ourselves out of success before we even try. The next time you see a challenge in front of you, go for it and just keep “pulling back.”

Stabilized approaches: the last six inches is all that counts