Blog - Latest News
You are here: Home1 / Article Archive2 / I was there3 / A landing and a one-wheel takeoff on Interstate 25

On a hot August morning in 1976, at 7:20 (rush hour), I landed a Cessna 172 on Interstate 25 south of Denver, Colorado, near mile marker 172. Within a few minutes of my touching down, a TV reporter and cameraman showed up. Five minutes later—and quite predictably—the Colorado Highway Patrol arrived.

In addition to my day job as Manager Flight Services at Jeppesen, I was a working CFI. That morning, I was giving dual instruction to a private pilot student with a passenger (the husband of wife’s sister) in the back seat. My student had recently completed her first solo cross-country. That morning, I had asked her what she enjoyed about her trip and also to tell me what questions she had. After explaining the great feeling of going someplace else on her own (without me), she said she had a couple of questions: the first was she needed some help to figure out how to determine the best way to enter a new airport pattern for landing. Then she explained she was having some difficulty when tracking outbound from a VOR. She said everything went well when flying to a VOR but flying from just was confusing. 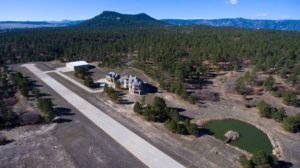 Not a great airport for a low performance airplane when it’s hot.

At 7:00 in the morning, we took off from Arapahoe County airport (now Centennial – APA). I asked her to fly to the Larkspur airport (now the private field Perry Park), still under construction at the time. Larkspur was on the 180 radial of the old Denver VOR as well as an airport that she had not been to before, perfect for accomplishing both goals—tracking “from” a VOR and entering the pattern to a new airport. The Larkspur airport elevation is about 6,700 feet and, importantly, the density altitude that morning was over 8,000 feet.

We successfully tracked the 180 radial to Larkspur and I helped her to determine the method to find the 45-degree entry leg to the downwind leg. She proceeded to fly the pattern legs followed by the final approach to landing. About 100 feet above the runway, I told her to go around since the runway, still under construction, was closed. She dutifully applied full throttle, pushed the carburetor heat knob to full cold, and raised the flaps from 40 degrees to 20 degrees. She also pitched up to maintain 65 knots and initiate a climb, since there was a significant hill about 200 feet above us on the other end of the runway.

As we flew over the runway surface, I immediately noted we were neither climbing nor gaining any speed. The hill at the departure end of the runway, on the other hand, was coming up fast. I told my student “I got it” and gently banked the airplane to the left, where we saw a busy Interstate 25. Despite full throttle, the airplane was still not gaining any airspeed, so I made the decision to fly low over the highway to pick up speed in ground effect. As we lumbered over to the highway (only a quarter mile from the airport), my brother-in-law pointed out that our flaps were still down. Surprised, I looked outside and saw that, indeed, our “barn doors” were still hanging. Looking back in the cockpit, I could see the flap handle was right where it was supposed to be (up), but the flaps themselves looked fully extended (later, inspection determined them to be at 40 degrees). Getting a little desperate for airspeed, I then jiggled the flap handle a number of times. Contacts finally closed, and I was able to get the flaps up.

By this time, however, we were over the highway, a mere 50 feet above the traffic and not flying much faster. I assessed our options as few and bad: the highway ahead was rising faster than we could climb. Additionally, a large tractor-trailer rig directly in front of us made our effective AGL altitude even lower. To the left was oncoming freeway traffic. The terrain to our right was dense with trees. I decided our only realistic option was to “merge” into the traffic from above and land on the highway.

In a stroke of amazing luck, a rest stop turnoff presented itself as soon as we touched down, giving us a “high-speed taxiway” I gratefully used to get out of the stream of auto traffic. As an interesting aside, the driver of the big rig in front of us saw our rotating red beacon in his rearview mirrors. Thinking we were a “bear in the air,” he also pulled into the turnoff and got out of his truck to see why he was being pulled over by an airborne Highway Patrol! 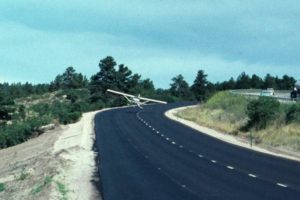 Sometimes only one option presents itself.

When the Highway Patrol arrived, the trooper invited me to join him in his car and informed me the FAA desired the pleasure of a phone call. “I’m sure they do,” I thought to myself. Since this was back before everyone on the planet had a mobile phone, I was grateful to find a pay phone (remember those?) at the rest stop. Fortunately (and completely by chance), the FAA Ops Inspector answering my call was my former private and commercial pilot instructor from Bozeman, MT, where he had also been a crop duster pilot.

Not only was I a former student, I had also flagged fields for him while he sprayed chemicals from his crop duster (this was before GPS made that chore unnecessary!). On one trip, I drove the chemical truck to a remote location to refill the chemical tanks on his plane. He landed on a deserted stretch of US 10 and taxied to my truck. As we talked on the phone, I said to him, “Hey, remember in Montana you showed me how to land on a highway? Well, I finally got it right!”

The FAA inspector gave me a choice: he would tell the CHP officer I was free to go, so I could either leave immediately or wait for a ferry permit so my insurance would still be valid. I decided to wait (giving me time to think about the details of getting airborne again), and a series of troopers carried the ferry permit to me by “passing the baton” between adjacent patrol areas.

While I waited, with passing drivers gawking at the sight of a Cessna parked in a highway rest area, the trooper drove my student and brother-in-law back to Centennial. My brother-in-law returned with my car and a camera. A couple of hours later the ferry permit finally arrived in another highway patrol unit. Since I knew the problem with the airplane was the now-retracted flaps, I knew it would be safe to take off in the airplane by myself.

I asked the highway patrolman to pull onto the highway and stop all traffic. I then asked the TV reporter to drive 1.5 miles down the road to make sure the highway was clear. That gave me about 7,500 feet of “runway”–an adequate distance, even with the high density altitude.

While waiting for my ferry permit, I took stock of the stretch of highway where I would be taking off. I noted the highway curved to the left almost immediately, so I closely watched the tractor-trailer rigs going around the corner to see how much they leaned to the outside of the curve. It appeared they didn’t lean at all at about 60 mph so I figured that when I took off, I could make the curve at takeoff power.

Well—not so. At full throttle in the curve, my 172 started to skid to the outside. I instinctively turned the ailerons to the left and went around the corner on only the left main gear, going airborne while flying on one wheel. Success! I was especially lucky (in our “pictures or it didn’t happen” world) that my brother-in-law, who had driven down beyond the curve with his camera, captured the one-wheel takeoff for posterity. 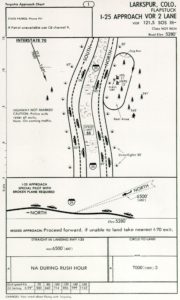 One of the perks of working at Jeppesen!

After a normal landing back at Centennial, inspection determined that the Cessna 172 had a defective flap actuator handle. When the flap handle was set to 20 degrees, the flaps would only retract to 33 degrees. Further, when the flaps were selected full up, they would not move at all unless the handle was pressed hard to the left to close the actuator switch.

While I like a tidy cockpit, my Jeppesen desk was typically cluttered. When I arrived at work the next day, my desk had been cleared of everything – except the brand-new Jeppesen “approach plate,” describing the I-25 VOR 2-Lane approach procedure!

Now retired from Jeppesen, instructing is still my passion. If it ever starts to feel like work, I’ll quit. What I learned from this experience was that things can go wrong even if you–or your student–don’t make any mistakes. Also, don’t panic: remain calm so that you can think of all possible options that might be available. Finally, remember it’s always best to be very polite when discussing your choice of landing runway with a Colorado state trooper! Jim Terpstra
Retired Jeppesen senior VP Jim Terpstra was a driving force behind the industry shift from paper to electronic navigation, leading the early development of many technologies that are now established aviation standards. Jim played a key role in the introduction of NavData® and worked tirelessly to ensure the availability of data in common, consistent formats. The Airline Avionics Institute awarded him their coveted Pioneer Award for his leadership in advancing flight information technology and aeronautical navigation. Jim is a current flight instructor and holds ATP, CFI-I, MEI, and Advanced Ground Instructor certificates. He has over 7,000 hours of flight time and has authored over 100 published articles on aeronautical charting.