Where did that come from?

This all started with the EAA Founder’s Innovation Prize contest, whose first year was 2016. The background research involved was analysis in great detail of 551 NTSB reports of homebuilt aircraft, sometimes reviewing them three or more times, plus supporting information from the docket and other sources. That in turn led to in-flight exercises to familiarize pilots with sight pictures and sensations outside of normal middle of the envelope flight. 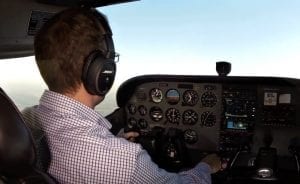 Then came a breakthrough. One of the subject pilots severely botched a low speed steep turn and there was digital flight data of the event, thanks to the glass cockpit in the RV-9A. Based on that event, I hypothesized that loss of control in a base-to-final turn was not a problem of lack of information, but rather of not adequately processing all the information already available. That in turn led to the theory of cognitive availability, suspecting that the most effective remedy to loss of control was not teaching technique—which is already well covered—but exposing pilots to sensations and out the windshield pictures without being distracted by watching instruments, so that the pilots would remain cognitively available to process the required information in stressful, unfamiliar situations.

That in turn led to yet another pass through the data and the discovery that not all stall/spins were in fact stall/spins, but some were low speed spirals. But why?

In the development of the Expanded Envelope Exercises®, subject pilots, including retired airline pilots and very senior ex-military test pilots, gave useful information with their body language and facial expressions. On those flights, I didn’t describe the exercises until just before we flew them. The body language when I announced that we were going to deliberately fly through the final approach path spoke volumes.

There was also one very recent flight in which I misjudged the tailwind on base and was overshooting final myself. I could not believe how strong the temptation was to tighten up the turn and not overshoot. Marveling at my own psychology, I chose to overshoot the turn by one runway width rather than tighten it up excessively and unnecessarily. It was amazing that even with all of the research I’ve done and all the times I’ve taught the deliberate overshoot, I myself was still susceptible to very strong pressures not to overshoot. The law of primacy at work?

Eventually, there were three possible reasons why pilots might screw up the base to final turn, either in alignment or in pitch:

This leaves Hypotheses 1 and 2. There’s no real way of knowing the psychology of a pilot in a fatal accident, but these two hypotheses seem plausible. And Hypothesis 1 has a trivial solution—go out and try it!

First, observe that turning final late has the exact same aerodynamics as turning final at the correct time. The only differences are the psychological aspects and the need to maybe turn a bit more than 90 degrees. Then again, in a traffic pattern with a tailwind on base, the turn to final will be more than 90 degrees anyway. In other words, there is no extra risk to this exercise, aerodynamically.

Some will suggest that on any runway overshoot, the only acceptable option is to immediately go around. While there may be merit to that argument in real world operations, especially for pilots with limited experience or in very challenging conditions, this exercise is a learning experience, to see the sight picture and to feel the emotions. Doing an early go around while training will compromise that learning experience.

Four ways to get into trouble 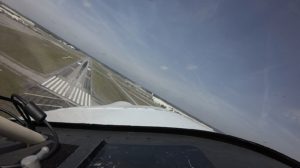 Tempting to tighten up the turn, but don’t do it!

Analysis of the NSTB reports, flight tests and other sources indicate four ways to get into trouble turning base to final. Although the accident mechanisms differ, all four seem to be susceptible to either Hypothesis 1 or 2 as major factors.

This exercise will probably not solve all base to final loss of control situations, but it will definitely solve some. Given that the cost is only one lap around the pattern and the benefit is the possibility of saving lives, this exercise has much to commend it.

Addendum: what about stall after takeoff?

When somebody takes the time to thoroughly analyze stalls after takeoff, they are going to find that existing statistics are at best misleading and well worth a quite colorful description.

For example, in the General Aviation Joint Steering Committee (GAJSC) Loss of Control Working Group’s Approach and Landing & Departure and Enroute from October 29, 2014, they studied 85 NTSB reports, of which 29 were experimental, amateur built. I classified eight of those 29 events as primarily traffic pattern events—only one was on takeoff/go around, and that was a pitch up on go around. I classified seven as pilot skills events, two of those being first flights in a homebuilt, one pilot was known to be scared of the plane, and two pilots were unlicensed. Those five egregious events were not called out into a separate category as would have been appropriate. By the way, the GAJSC used this data set to recommend angle of attack indicators, a recommendation that is at best a stretch.

I also generated a set of 40 “stall after takeoff” events, according to the NTSB classification and again, those were experimental, amateur built aircraft. A half dozen of those were STOL aircraft that crashed immediately after takeoff, one of those being an instructor giving dual. He had rudder pedals on his side, but not a control stick. Eight or so of the “stall after takeoff” were more properly classified as failure to achieve sustained flight. One stall after takeoff occurred when the canopy came off the airplane at 1000 feet.

Ever heard the expression, when all you’ve got is a hammer, every problem looks like a nail? Similarly, if the only accident classification you’ve got for events after takeoff is stall, every event after takeoff will become a stall. But just becase a stall occurred after takeoff does not mean that the stall was causal or even that “stall” was an accurate descriptor. It certainly doesn’t mean that all those “stalls” could be remedied in the same way.

Yes, there are stalls after takeoff and in the pattern, but nobody yet has taken the time to classify all these events to appropriately high levels of detail. That analysis will be a major undertaking, and the results will be muddled and confused, but not clear cut.

Beyond the $100 Hamburger: how aerobatics can expand your horizon
Scroll to top