Blog - Latest News
You are here: Home1 / Article Archive2 / I was there3 / Beyond the $100 Hamburger: how aerobatics can expand your horizon

Did you learn to fly because you were excited about the challenge of levitating into the sky and seeing your world from a new perspective? You mastered the basics of operating the machine, navigating from A to B, understanding how weather works, and the regulations. You earned your instrument rating because everyone at your flight school said that would make you a better pilot. You took your friends up. You have flown out to all of the $100 hamburgers. But the reality is setting in that most of your flying is solo. Your profession does not offer flying for business. You find yourself slowly flying less and less. You used to go up once a week. Then it became once a month. Now you are worrying about your 90 day currency. Where did the excitement go? 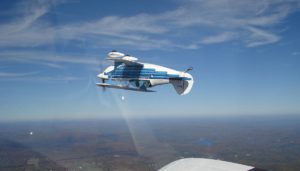 Going beyond straight and level means challenge and fun.

A lifetime ago I ran into the same mental block. With a good non-aviation profession underway, looking around at my airline friends suffering through furloughs during an industry dip, I knew I was going to be a mostly recreational pilot. Then I ran across a little advertisement offering an “Introduction to aerobatics and BFR.” That looked different! Maybe your primary instructor talked about stall avoidance and you never did any maneuvers involving more than 30 degrees of bank? So, what did the pilots I saw at airshows and in video know that I didn’t know?

I called the number in the ad. My logbook says that I met J. Thomas Laury and his Cessna Aerobat. He demonstrated a spin; I did a spin. He did a loop. I did a loop. He did a roll. I did a roll. We flew for an hour and didn’t go out of sight of the airport. But as a pilot, that hop opened a door that went far beyond where flying had taken me before.

Have the flight instructors that sat with you explained how you can maneuver at zero airspeed? How you can roll 360 degrees and turn to a new heading at the same time? I watched 7-time US National Aerobatic Champion Leo Loudenslager do a 360 turn, continuously rolling to the inside of the turn every 90 degrees, at a constant altitude. The voice inside said, “I want to do that!” Thus began my love affair with aerobatics and aerobatic competition.

I’ll offer my “Top 10” reasons why you should try aerobatics:

9. ATC does not issue “atta-boys” for a perfectly flown ILS.

8. Cessna/Piper/Mooney/Cirrus owners don’t hang together and compare how their ships
fly.

7. Flying to one of the exotic destinations shown in the magazines to sit around and consume fruity drinks with non-flyers is boring. I like destinations with action, preferably aviation action that I can participate in. 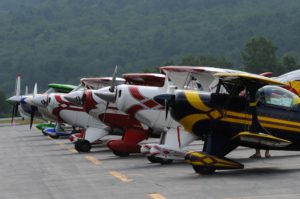 Aerobatic competitions are a great way to connect with other pilots.

6. It takes 20 minutes or more to get the G1000 in a Cessna set up. In my Pitts Special acro ship, it takes two minutes to start the engine, power on the comm and transponder, run the checklist, and call Ground for taxi.

5. My primary flight instructor showed me approaches to stalls and that’s all. He seemed nervous coming down final when the indicated airspeed got down to 1.3 Vso. Aerobatics taught me how to maneuver when the airspeed indicator reads zero, as well as how to do spins and the falling leaf exercise.

4. An aerobatic contest is a fly-in where everyone is either flying or judging and they post how well you did on the wall for everyone to see. It’s up to you whether you are a hero or a zero. But whatever you make yourself, you are accepted as a competitor.

3. An aerobatic contest is a place where, for the four minutes that you own the competition arena (a waivered box), you don’t have to worry about FAA rules—just the laws of physics.

2. You climb into the airplane and compete with yourself. The only score that you can control is your own. Flying better than your peers is incidental.

1. Medals and trophies reinforce that you outflew your peers today. Tomorrow is another day. You need to fly more to stay ahead. Another excuse to go fly more.

If all of this sparks your interest, the challenge is to find somewhere you can get a taste of this sporting side of the aviation world. The International Aerobatic Club has a list of the flight schools that they know of. And there a number of flight schools out there not on IAC’s list that have an aerobatic airplane and offer introductory training. All will get you doing the basic spins, rolls, and loops. It is eye opening that an airplane does not just take off, fly level for some miles to a destination, and land. You will learn to really function and think in three dimensions, not two and a half. 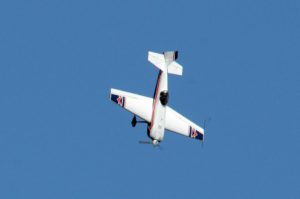 Afraid of any pitch beyond 10 degrees? Go fly aerobatics.

Many aviation activities gather like-minded pilots socially. Aerobatics does too. The IAC has chapters that host contests, a kind of fly-in where we all swallow hard and put our skills on display before a panel of judges and our spectating peers. Like many sports, these competitions are divided into skill levels. If you can do the basic loop, roll, spins figures, you start competing in the group or category called Primary. As you learn more figures you move to the Sportsman category. Then Intermediate. For the truly motivated, Advanced and Unlimited categories await.

For most of us, we really have an excuse to fly more without getting more than 20 miles from the airport. After all, my friend Ron and I want to out-score the other at the next contest. And neither wants to commit a flub in front of the onlookers that might earn us a “Bozo” award. And each contest has a social gathering of pilots, family, and friends in the evenings where we swap lies, poke fun at our performances, and enjoy the company of those who share the same aviation gene. The aerobatic world is a big family. To join you just learn to do that first roll, on heading, on altitude.

I fly aerobatics because I can. Challenge yourself.

Wes Liu
Wes Liu is a 3900-hour Commercial, Multi, Instrument, Seaplane, Senior Parachute Rigger, 1600 skydive, IAC Intermediate aerobatic competitor. Wes flies in IAC competition with his Pitts Special S-2A. Like many aviation enthusiasts, Wes started building models as a child. In 1976 Wes earned his first pilot certificate. Wes and his spouse Ann, another pilot and skydiver, live at a New Hampshire aviation community. Wes is a regular at aerobatic contests in the northeast US.