“To err is human, but to persevere in error is only the act of a fool.” —Cicero

I had qualified as a fighter pilot in the Indian Air Force in 1966, completed the flight instructor’s course a few months earlier, and just upgraded to QFI Cat B a few days ago. In other words, I could do no wrong. I was indestructible!

I was carrying out an A&E check on a Harvard IV-D which had undergone a routine servicing. I was flying solo and the plan was to do the engine and trim checks followed by a stall and spin. If all was well, I was to do a few aerobatics before heading back and declaring the aircraft serviceable.

Having checked out and written down the engine temp and pressure readings, I got down to the pleasurable part of the flight—aerobatics. Doing aerobatics on the Harvard were a real pleasure; the deep throated roar of the P&W nine-cylinder radial engine was masculine and the controls so responsive. I did a couple of loops, slow rolls, and rolls-off-the-top (Immelmann turns). This was followed by my favourite manoeuvre, stall turns.  The first stall turn was to the left and she cartwheeled so beautifully. 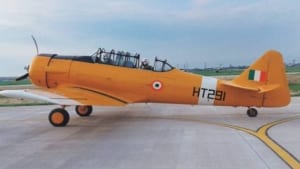 The Harvard IV-D is a fun airplane, but it can bite.

The second one was to the right, which in the Harvard was always a challenge as she tended to get stuck if the timing of the rudder, aileron, and throttle wasn’t perfectly coordinated. Therefore, as the big yellow beast wheeled to the right ever so daintily at the very first attempt it gave me a tremendous sense of satisfaction. As the nose snapped to the vertically down position I kicked full opposite rudder and watched as the yaw stopped precisely in line with the reference road in the center of the huge round engine cowling. The rest of the manoeuvre was a piece of cake and, as the IAS increased, I gently pulled the stick back to pull out of the dive.

This is when an unusual flicker of light on the right attracted my attention. For a moment I thought it was a stray reflection from a shiny patch on the starboard wing. But a glance to the right revealed that the entire upper surface of the wing was covered by a thin sheet of flame! I watched in fascination as the flame crept rearwards, gradually turning from yellow-red to blue as the speed increased. It finally extinguished itself as the speed increased.

On levelling out I could see a small quantity of 100/130 octane fuel bubbling out of the starboard tank refuelling cap.  I figured that this fuel must have caught fire as a result of flames from the huge exhaust of the engine, which terminated at the wing root on the starboard.

The correct thing at this stage would have been to quickly thank the Lord for putting out the fire and high-tail it back to base. But rookie QFIs aren’t known to be very wise. This was mistake number one; but as old Cicero pointed out, this was excusable as it is natural for men to err!

Having gained some height, I decided to “confirm the snag” by doing another stall turn. Mistake number two (keep counting).

Once again, I put her into a dive and pulled out to point the nose heaven-wards. Once again the manoeuvre was as close to perfection as I could have wished for. The slight inside aileron and right rudder were perfectly timed, as was the gentle throttling back to coax her around to the right. I had by now forgotten about the “snag” and it was a bit of a surprise to once again find the starboard wing covered with a thin layer of flames which rapidly blew towards the trailing edge before disappearing.

It may be pertinent to mention at this stage that I have always been fascinated by fire. I can watch the flames of a warmly glowing fireplace or a bonfire for hours without getting bored. I am sure many readers share this fascination. But I am not so sure how many pyromaniacs fit the latter part of Cicero’s observation about persevering in error. That day I certainly gave this wise old man a chance to be proved right as I went in for yet another stall turn! Mistake number three, to help those readers who are counting. 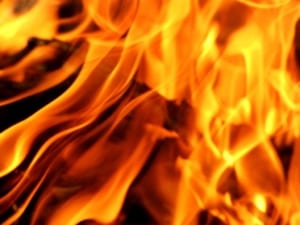 This time the Lord must have been having a coffee break. I pulled the Harvard vertically up, gave just the right amount of stick, rudder, and throttle. But wouldn’t you know it, she refused to yaw and hung there in the sky with the nose pointing heaven-wards for what seemed like an eternity.

I braced myself for the inevitable hammer stall, caused by the relative airflow of the tail slide catching the elevator from the rear and reversing Bernoulli’s principle. The hammer stall of the Harvard was not unsafe, but it was not for the faint hearted either, and its viciousness was directly proportional to the length of time the aircraft stayed in the vertically up position. Considering the interminable time the aircraft remained vertically up this time, almost as if held by an invisible string, I instinctively knew this time it was going to be a whopper of a hammer stall.

I wasn’t disappointed. Suddenly the nose started pitching forward and I hung on to keep the stick in a neutral position as we (my parachute and I) were lifted out of the seat due to the negative G. In a flash the nose went down past the horizon as fast as a bullet train. Then, almost as suddenly as the hammer stall started, it was over; the nose was now pointing straight down and the speed was building up. “No sweat,” I said to myself. I must admit I was feeling quite a hot rod!

But it didn’t take me long to realise why I was feeling like a hot rod—it was due to yet another fire! This time it wasn’t a thin layer of flame; the whole starboard wing, even the root area, was ablaze and I could feel the heat on my face through the canopy. I could also see the yellow paint bubbling and turning black. Even after all these years I vividly recall the smell of petrol fumes inside the cockpit. The prolonged negative G had obviously allowed a lot of fuel to spill. The thought crossed my mind that this was the end and that soon the whole aircraft would explode.

But I wasn’t ready to give up. Though I had done some pretty stupid things that day I fortunately hadn’t taken total leave of my senses. I held the aircraft in a dive, and carried on diving till the IAS needle would go no further. The whole airframe was groaning and shuddering as it hit Vne. But I could see we were winning (the Harvard and I). I could see the yellow flames turning to blue, like the ionised flow from a blow-torch, angry and hot. But nevertheless sliding back to the trailing edge, being blown away by the speeding airflow over the wings.

At last, at long last, the flames died and I started levelling out. A glance at the altimeter showed I was down to about 1000 ft. AGL. Needless to say, this time I did the right thing and headed back to base to land. Post-flight inspection revealed nothing more than a loose refuelling cap, but because of my folly the aircraft could have been lost. Fortunately, I got away with only a blackened wing. It could have been a lot worse… and Cicero’s wise observation would have claimed another foolish victim. Subhash Bhojwani
Subhash Bhojwani was commissioned in October 1965 as a fighter pilot in the Indian Air Force and flew about 4600 hours on Hunter, MiG21, Jaguar, Mirage2000, and training aircraft such as HT2, Harvard, Vampire, Kiran, L-29 and L-39. In the 14-day air war with Pakistan in December 1971, he flew 31 missions. He qualified as a flight instructor in December 1973 and achieved Cat A-1 QFI rating in 1984. He completed 40 years of service and retired as AOCinC, Air Training Command in Jan 2006.

Easier than they say: flying a Cub from Idaho to Baja Mexico