Blog - Latest News
You are here: Home1 / Article Archive2 / I was there3 / Helicopter rescue on Mount Rainier 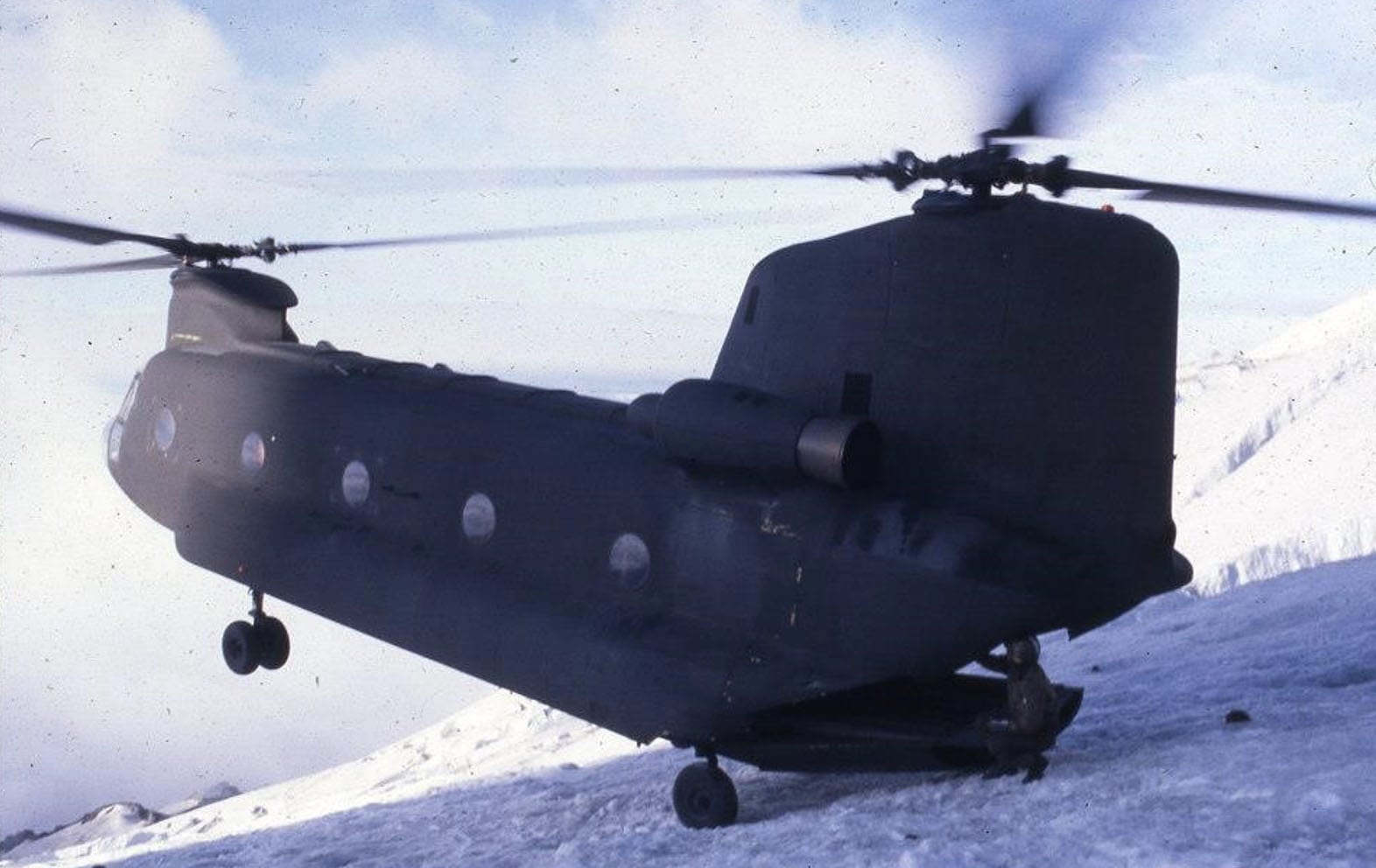 It all started with a pounding on the front door at 5:00 AM. We were living in a house inside Mount Rainier National Park. I was directing youth programs in the park and at the time coordinating helicopter support from the US Army Reserve 92nd “Hooker” squadron out of the Seattle area in Washington State. For the better part of the summer, we had access to 10 or more of the very big, twin-rotor CH-47 Chinook helicopters to fly materials and supplies into the back country for our youth projects.

Standing at the door, was one of the mountain rescue rangers from the park. Knowing we had more than a couple of Chinooks camped out at the temporary landing zone/base camp at the time, he asked, “Do you think any of your Army guys would like to help with a high-altitude rescue?”

I said I didn’t know but we could go ask. I knew these guys would be up for almost anything. Many were combat veterans who I had seen in the park do amazing things with the Chinooks over the past weeks.

Off to the LZ. We went and woke up the pilots and crew. Looking up, we could see clear blue sky, but we were blanketed by thick ground fog. Rules say you don’t take off in this ground hugging soup, but the crew said, “Let’s go pull the injured climbing party off the mountain stuck at 13,500+ feet.”

A normal medical emergency helicopter we often see at accident scenes could not get up to that altitude. The air is too thin to create lift for a normal helicopter. Chinooks, however, can handle 15,000 feet or more.

When we lifted off, I was in the jump seat between the two pilots with a topographic map on my lap. A spot was marked as to where the climbing party was supposed to be.

Clearing the fog quickly, we were climbing steadily in the early morning sun. The huge mass of 14,400-foot Mount Rainier was directly ahead. After a while, some small black dots appeared on the steep slope of the mountain. Yes, those are not rocks, but rocks don’t have arms that wave. Now there was no flat place to set down, just a very steep slope of snow.

Just another day at the office.

The pilot turned the Chinook around and backed into the slope. The crew chief watched the back rotor from the open ramp, making sure the rotors didn’t hit the slope. I watched out the side door. We touched the snow with the rear landing gear, lowered the ramp and held a hover.

We rushed out and pulled everyone inside. The ramp came up, nose dropped, and we flew off the slope heading directly to the hospital in Puyallup. During the flight, the crew chief and park ranger stabilized the injured climbers. We arrived about 30 minutes later.

After arriving at the hospital, our next challenge was to find a place to land. The helipad used by other small helicopters was not big and strong enough to hold a Chinook. A call from the park gave the hospital notice we were headed their way, so they had an ambulance ready to meet us at the empty parking lot for the hospital.

As we settled down, I watched out the side window. All the fences of the houses bordering the parking lot were instantly flattened as the rotor wash blew everything down. Some home owners were going to be unhappy. I went into the hospital to find someone in charge to let them know of the problem heading their way with their neighbors.

The administer I met said, “No problem, we will handle it.” Soon we were buttoned up, back in the air headed back to Mount Rainier. Everyone felt pretty good about this successful impromptu morning mission.

Later that afternoon, I was on another aircraft coming back to the LZ after flying materials for a project. We got a call to assist with another rescue. A hiker had fallen and was seriously hurt. We found a place close by to set down. The rangers loaded the hiker and off we went to Puyallup for the second time that day.

As a result of those rescues and other work by the Army Chinooks in 1982, part of the current training program for CH-47 Chinook pilots and crews at US Army base Fort Lewis, Tacoma, includes supporting high altitude rescues at Mount Rainier. Since then, CH-47 Chinooks have participated in many rescues at Mount Rainer National Park. It all began with the summer Youth Conservation Corps program in 1980 and the US Army Reserve, 92nd “Happy Hookers” Heavy Lift Squadron out of Paine Field, Everett, Washington.