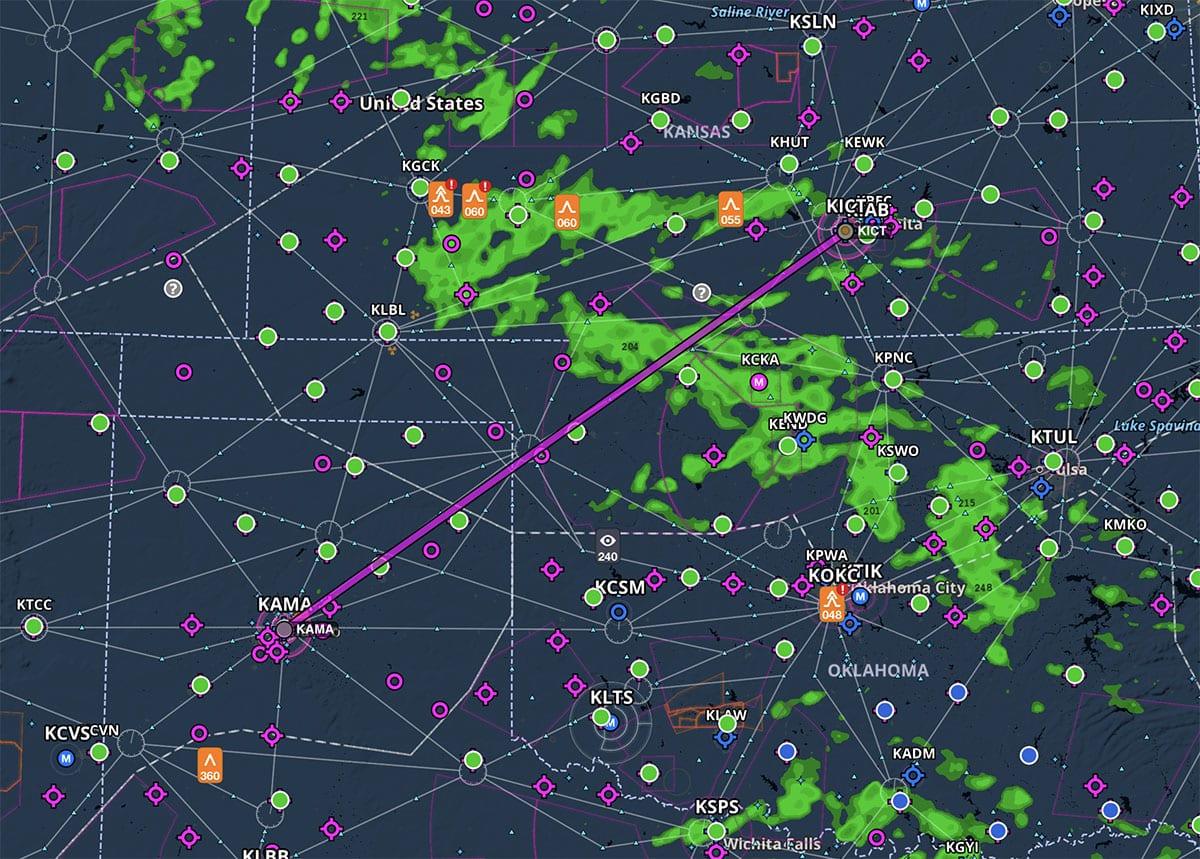 Over the last 10 years, you’ve gotten to know your Mooney 201 quite well, using it to travel around the central United States at 160 knots. You’re hoping to do that again today, on a flight from your home in Wichita, Kansas (ICT), to Amarillo, Texas (AMA). Your airplane may be vintage, but it’s a fine cross-country cruiser, so the trip should take just over an hour and a half.

Proposed departure is 1400Z and you’re hoping to go VFR if possible. Read the weather reports below and tell us if it’s a go or a no go for you.

At first glance, conditions look reasonably good for your flight, with green METAR circles all over the map. But some green radar returns are worth looking at in more detail.

The current surface analysis shows benign conditions in Kansas, but a weak front over North Texas.

The first prog chart shows storms developing over Oklahoma later in the day.

The short term convective forecast matches this chart, but all the activity should be east of your route.

There’s definitely some rain along your route, but all the green METAR circles suggest it isn’t too serious. To learn more, you turn on the “lowest tilt” radar layer in ForeFlight. It shows no green along your route, suggesting that area of precipitation is aloft and not hitting the ground. Maybe it’s just wet clouds above 10,000 feet?

This part is pretty easy: your departure airport is reporting excellent VFR conditions and it is forecast to stay that way.

Your destination is likewise forecast to remain VFR throughout the day. The wind is blowing, but when is it not in Texas?

The weather is good VFR and that rain appears to be up high. But those PIREP symbols on the map are worrying. There are multiple reports of moderate turbulence at lower altitudes, and some are even severe. These are west of your route, but not by too much.

Another one, closer to your route, shows moderate turbulence at 5,500.

South of your route there’s another one, with some worrying notes.

The turbulence forecast layer in ForeFlight shows a few areas of concern, but nothing major.

The current SIGMET map might offer an explanation. The gusty winds seem to be causing low level wind shear, although again it’s mostly east of your route.

It’s time to make the call. The weather is great, but the wind is blowing and it might be a bumpy flight. Are you flying to Amarillo or canceling? Add your comment below and tell us your decision.

Landings at the crosswind limit

An FAA medical story with a happy ending
Scroll to top