Blog - Latest News
You are here: Home1 / Article Archive2 / History3 / The story of a winged boot, and the men who wore it 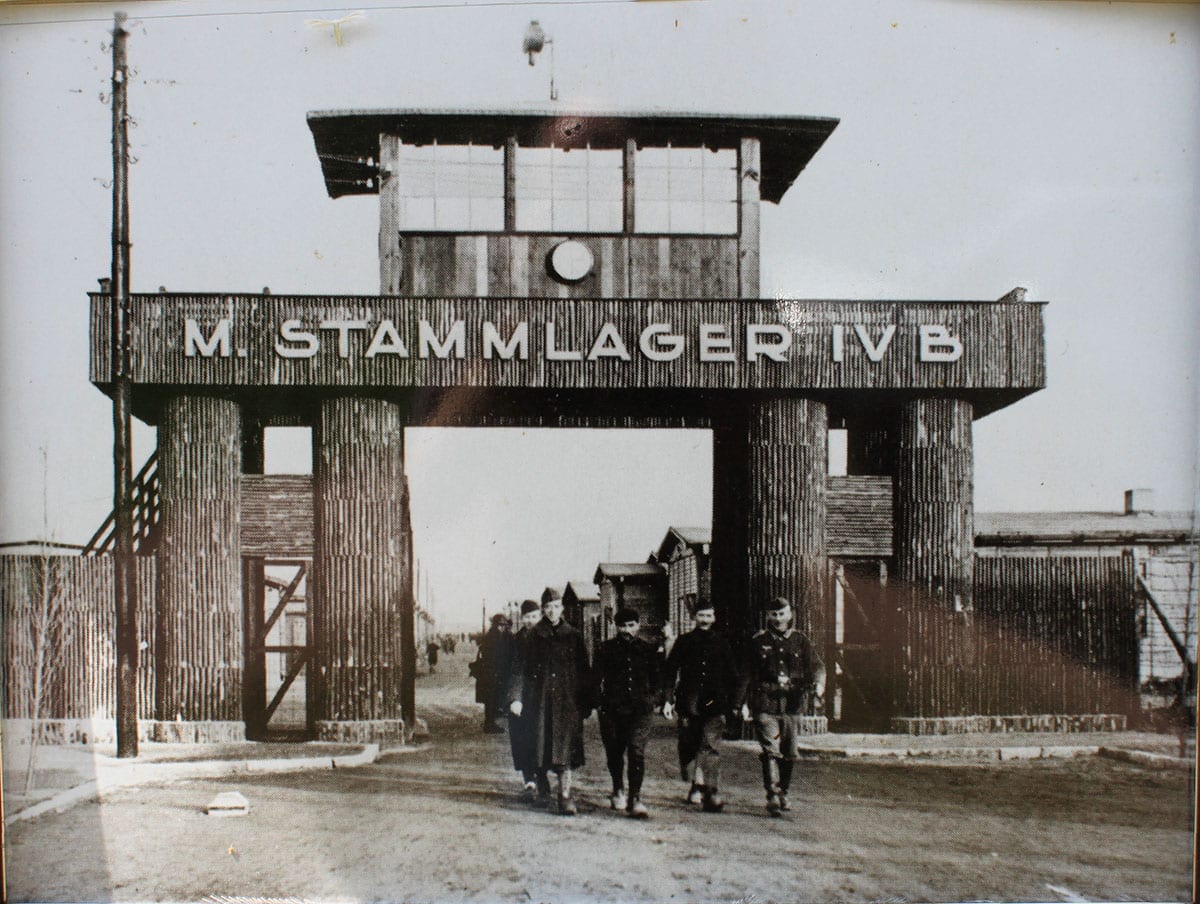 Although this story began nearly 75 years ago, it was only recently that my wife and I found out about a very interesting part of the tale. My wife, Susan, and I are both “brats;” her father served 22 years in the US Air Force, retiring as a chief master sergeant, while my father served 32 years in the US Army, retiring as a colonel. We both experienced the typical “brat” life—attending many schools and living around the globe and across the US.

A unique patch—what does it mean?

We have a lot of memorabilia from both of our fathers and recently Susan’s sister gave us some additional items, to include his aerial gunner wings. However, one unique item she gave us really grabbed our attention. It is a small (1.5” high x 2.5” wide) patch featuring an embroidered boot with a single wing on it (see picture at right). Susan and I wondered what the significance of a winged boot was and why it was part of her father’s memorabilia. I searched the Internet and was stunned by what I learned.

I found that winged boots meant a great deal to the men who wore them as well as how they came to be authorized to wear them, and how they were obtained. It’s an interesting story, but first, some background on Susan’s father and how that led him to acquire a winged boot.

During World War II, Susan’s father, Ralph “Yountsy” (YON-tsee) Younts, was a sergeant serving as a B-17 top turret gunner and flight engineer. Shortly before his crew flew their new Flying Fortress, dubbed The Reluctant Dragon, to England, they posed for a picture (at right) at their training base in Nebraska. Sergeant Younts is in the back row, second from the right. Upon arrival in England, the crew was assigned to the 336th Bomb Squadron (Heavy) of the 95th Bomb Group, flying out of Horham in Suffolk, England.

The crew of The Reluctant Dragon, with the author’s father-in-law in the back row, second from right.

On the 28th of September 1944, the 95th BG flew its 196th mission of the war; however, it was just the 2nd mission for the crew of The Reluctant Dragon. The target that date was an oil refinery at Merseburg, Germany (just west of Leipzig), and the mission debrief noted the formation encountered “heavy and accurate AAA in the target area.” Yountsy’s crew could attest to the “accurate” part of the debriefing, as their aircraft was crippled by German flak, forcing them to drop out of the formation immediately after “bombs-away.”

They radioed that they were going to try and make it to Free France, but, as luck would have it, they ran out of airspeed, altitude, and ideas while still over German-occupied territory. They delayed bailing out while attempting to reach a safe area and ended up having to ride their trusty, rugged steed through a crash landing in an open field. Fortunately, all 10 crewmen emerged from the wreckage unharmed; however, they were immediately captured by German troops.

The intrepid airmen were quickly placed on trains and shipped to POW camps. The NCOs ended up in Stalag Luft IV in northeast Germany (now Tychowo, Poland), where they were held with over 8,000 other Allied airmen. Life was not easy in the camp: rations were meager and their treatment was harsh. In 2005, Susan and I attended a reunion of Stalag Luft IV POWs in Denver hoping to meet someone who might have known her father. Although we didn’t find anyone who knew her father, we learned how terrible their treatment was when one of the former POWs recounted how a young airman was climbing out of a barracks window on a lark and was shot by a German guard.

Life was hard in a German POW camp.

As Russian forces advanced from the east, the Germans began evacuating the prison camps near the front, intending to consolidate POWs from several camps in central Germany. This was done to keep them as a “bargaining chip” with the Allied Powers. The evacuation from Stalag Luft IV began on February 6th, 1945 in groups of 250 to 300 men. The POWs’ westward march lasted 86 days and covered some 600 miles—nearly 10 times longer than the infamous Bataan Death March. It became known as the Black March because of the conditions under which it was made as well as the severe treatment the prisoners experienced.

The men were forced to march under guard about 15–20 miles per day during the worst winter in Germany in over 100 years. It was reported the temperature was ten degrees below zero when they began their march. Their treatment was very brutal with the sick receiving little care as dysentery and diarrhea set in. Some prisoners were bayoneted while others were kicked and hit. Shelter overnight was sometimes in a barn or whatever structure was available, or they slept in the open, in spite of the rain or the snow. As for food, a bushel or two of steamed potatoes for a barn full of men was the best they ever received at the end of a day. Often, the food was placed in the barn in the dark of night for the men to get what they could. The German government provided no clothing. The men carried two blankets and an overcoat (if they had one) for bedding.

The average POW lost a third of his body weight after capture and those on the Black March continued to lose weight. They drank water, often contaminated, from ditches beside the road, or they ate snow. They bartered with cigarettes, watches, rings or whatever they had to get food from the farmers along the way. However, in doing so they risked both their own lives as well as those of the farmers. The POWs ate charcoal to help stop dysentery, and they all became infested with lice, while pneumonia, diphtheria, trench foot, and other diseases ran rampant among the men.

Acts of heroism were virtually universal, with the stronger helping the weaker. Those fortunate enough to have a coat shared it with others, to include the guards, comprised mostly of older men and teens. The Germans sometimes provided a wagon for the sick. However, horses were seldom available, so teams of POWs pulled the wagons through the snow. When a wagon was not available and a POW fell out along the road, a German guard would drop back and a single shot would ring out. The guard would then come back into formation alone. However, not all Germans were hated; a guard nicknamed ‘Shorty’ by the POWs was carried by several prisoners after he could go no further on his own.

Like all of the POWs, Susan’s father was desperate. He decided to try to escape. Signaling a guard that he needed to relieve himself, he received a nod to go into the woods alongside the road. He went a short distance into the woods, counting on the guards not wanting to chase him and risk losing additional POWs. Once he saw the guards weren’t watching him closely, he mustered his remaining strength and began running. A few shots were fired at him, but he quickly disappeared from view behind the trees.

For the next several days, he wandered aimlessly while also losing track of time. Eventually, he passed out in a ditch beside a road and later awoke to the sound of armored vehicles. Believing he was either going to die of exposure and/or starvation or else be shot, he decided to step out with his hands in the air. Fortunately for him, he was greeted by a column of British armor and was repatriated.

Upon admission to a hospital in England, he weighed all of 82 pounds. He was well cared for and eventually returned to the U.S. where he married his sweetheart and became an aircraft mechanic in the newly formed USAF. When he retired from the Air Force in 1964, he was the line chief for the B-52s stationed at McCoy AFB, which is now Orlando International Airport in Florida.

Now, about that winged boot discovered among the memorabilia belonging to Susan’s father. My research revealed that it was from WWII and that it originated with RAF airmen. They were worn by those aircrew shot down over occupied Europe who either evaded capture or else escaped from imprisonment and evaded being recaptured (E&E’d). In both cases, the airmen eventually were successful in returning to England. Upon arriving home, they were debriefed about their E&E experience by British intelligence personnel.

For the lucky ones, survival meant a return home to family.

One of the first things these aviators did after being released from their debriefing was to make a visit to Hobson and Sons in London (established in 1850 and still in business). Once there, the escapee would have a wire (or bullion) “Winged Boot” badge made for themselves. This signified they were now members of the Order of the Winged Boot, a fraternity comprised of those who had successfully returned to friendly territory after being shot down. Although the insignia was titled and often awarded in a light-hearted and humorous way, the fact is, aviators were well aware of the experience that it represented.

Now you can tell others about the “Winged Boot.”

The sketch below depicts Susan’s father in front of the B-17 in which he was a crew member. I commissioned it as a present for Susan. with copies made for her two siblings as well as for her mother, “Sammy.” Together, Susan and I gave copies of the sketch to Yountsy and Sammy’s five grandchildren and their nine (soon to be ten) great-grandchildren.

A day in the life of a fledgling instructor

“We was on fire; I could see the flames!”
Scroll to top