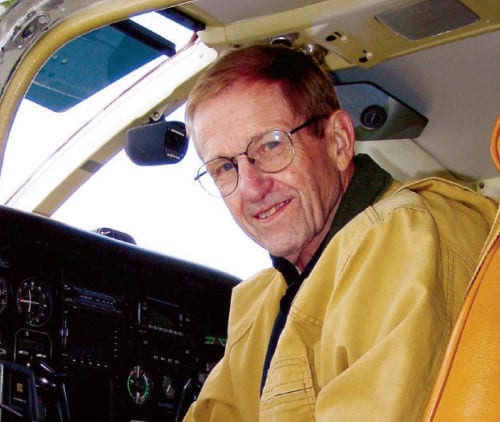 In early 2011, Richard Collins wrote me a letter (seriously, with real paper) pitching a seemingly off-the-wall idea: he suggested Sporty’s start a free online magazine for pilots, with a few articles from him but mostly written by readers. He proposed we use the name Air Facts, a magazine founded in 1938 by his father but dormant for decades. Richard didn’t exactly send weekly dispatches, so while I was initially skeptical, I gave his suggestion serious consideration.

The more I thought about it, the more I liked it. As pointed out in the letter, the changing media landscape had opened up a gap between established print magazines, which were often slow to adopt online formats, and personal blogs, which were popular in 2011 but often erratic or gossipy. With little more than a gut feel that it could be interesting—and a lot of faith in Richard—we dove in. He wrote a few articles, I learned how WordPress worked, and we recruited mutual friend Pat Luebke to be our managing editor.

In March 2011, Air Facts went live in its 21st century form. Business plan? Editorial calendar? We didn’t have them.

When Richard Collins made a suggestion, it was wise to listen.

A decade later, I’m glad we gave it a shot. Ten years is a long time on the internet, so the fact that Air Facts has survived is an achievement, but it’s done much more than that—it has thrived, and grown into its own bustling community. In fact, it has succeeded beyond my wildest dreams, with over 1 million visitors last year from all around the world. Even more satisfying are the 1,900 articles we have published since 2011 (you can read our most popular 15 here), written by 760 different writers, most of them just regular pilots with a story to tell. The variety and quality of the writing—and the reader comments—continues to impress me. It even gives me hope that not all online conversations have to be toxic.

A lot has changed about general aviation since 2011, much of it for the better. The industry has bounced back from the misery of the financial crisis, which we were still digging out of when we restarted Air Facts. COVID-19 may have ruined some airline balance sheets and delayed some career dreams, but GA is actually doing pretty well. GAMA reported that piston airplane deliveries last year were up 46% over 2011, even with the pandemic depressing some sales. Flight training is hot, with FAA knowledge test volume for the Private Pilot up nearly 50% since 2011.

Other changes mean once-heated debates are now settled. The iPad is no longer a fad; it’s a fact of life for most pilots and a major upgrade over the old way of doing things. The Cirrus accident record has gone from awful to excellent, with important lessons about training learned along the way. The ADS-B deadline came and went without ending aviation as we know it, but a lot more pilots are flying with traffic alerts in the cockpit.

The pessimist might easily retort, “Plus ça change…” Indeed, we’re still struggling to find an unleaded fuel replacement—if anything, a resolution seems as far away as ever on this subject. ATC privatization has not happened, the average GA airplane is 50 years old and getting older, and in spite of what some tech websites wrote over the last five years, drones are not delivering pizzas quite yet.

Another constant is our focus on safety at Air Facts, not because we’re cheerleaders for the industry but because we’re interested in what the facts are (it’s in the name, after all). As Richard Collins wrote three years ago, when reflecting on the enduring themes of the last 80 years:

“What have been the major factors in the safety record improvement over the years and in particular the last couple of years? And, is there any way to reduce the risk even more?”

These complicated questions often get oversimplified into the tiresome technology vs. flying skills debate—Cirrus pilots pushing buttons vs. Cub pilots flying by the seat of their pants. The reality is much more interesting, as Richard always pointed out. General aviation flying has gotten safer at the same time that datalink weather and autopilots gained in popularity, and any honest assessment of the accident record has to acknowledge that.

The GA accident rate has been improving—do we know why? (chart courtesy of AOPA Air Safety Institute)

And yet most accidents are still caused by the pilot, often for predictable reasons: stalling on takeoff or stumbling into clouds without an instrument rating. Technology will not solve these problems alone. How the human in the left seat manages the latest equipment is where the rubber meets the road in 2021, and the subject of many articles to come.

In the end, we can’t definitively answer these questions, and that’s OK. It’s the process of discussing aviation safety, of facing hard truths and being open to behavior changes, that makes us better pilots. The fact that we have such a diverse range of pilots willing to tackle these topics in good faith makes me optimistic about our future. The good old days are now.

My only regret is that I don’t get to have these conversations with Richard Collins and Pat Luebke anymore: Richard passed away in 2018 and Pat in 2019. In many ways they were polar opposites, but they shared a commitment to brutal honesty and were both worthy opponents in our regular intellectual sparring matches. Fortunately, Air Facts is supported by a great team at Sporty’s, from pilots to web developers to graphic designers, so our commitment will not waver.

The real strength at Air Facts is the community. Thank you to all the writers, from Australia to Arizona, who have shared their story. Thank you to the readers, whether student pilots or fighter jocks, who add thoughtful comments to articles, typically without the hate and anger of other websites. One longtime reader told me years ago that he felt like he was an “unofficial Air Facts ranger,” responsible for maintaining an atmosphere of civility. If you’re one of those, know how much we appreciate your work.

Today I’ll be raising a glass to another decade of Air Facts. When we celebrate 20 years in 2031, we’ll probably still be burning leaded avgas and complaining about the FAA. But hopefully we’ll be able to celebrate an ever-improving safety record. Fly safe.