Blog - Latest News
You are here: Home1 / Article Archive2 / Opinion3 / VFR over the top: legal, but not clever 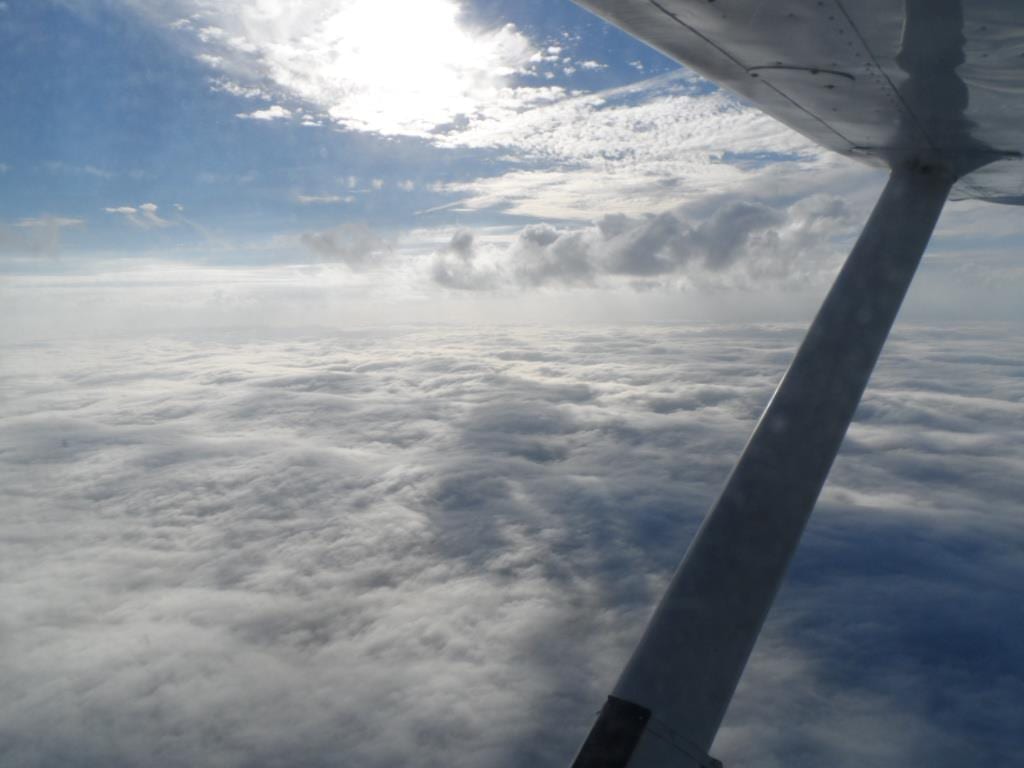 This is very likely my all time favorite expression about aviation regulations. And although there are many situations where I find it suitable, today I want to bring some where I don’t, but I know many do.

These quarantine days I was publishing some stories on my Instagram account over the differences of rules between FAA (where I learned to fly) and the Brazilian ANAC (where most of my compatriots did). And one very significant difference is about VFR flight over the clouds. Well, as most of you under the FARs are aware—not to say used to—in the United States it is perfectly legal to fly VFR without any visual contact with the ground. As long as you maintain the minimum VFR requirements regarding visibility and cloud clearances, you are good to go—all you need is a natural horizon. (This is not the same as “VFR-on-top,” which is actually a type of IFR clearance.)

You can’t see the ground, but GPS makes it easy to know where you are.

No rocket science here: you will be obviously navigating in an IFR fashion. If using Victor Airways or VORs in general was already good enough, with ATC vectors and GPS it’s a walk in the park to know precisely your position at any given time. The dead reckoning days are—for good—gone.

It’s been said that most of a pilot’s job is risk assessment. Yes, we love the idea of fighting the controls, rudder inputs, precise throttle movements, and smooth touchdowns. But no one can nail those long enough if they aren’t capable of working out the complex and not always obvious idiosyncrasies of the three elements in any aircraft accident report: the man, the environment, and the machine. In order to do so, you must be both equipped with knowledge and proficiency. With legal boundaries and equipment. With regulations and training. Let’s put all this in perspective in a scenario-based way.

Let’s say you rented an IFR-capable Cessna 172 on a sunny morning and flew two hundred miles north to have lunch in charming Hilton Head, South Carolina, at the extreme tip of the Jacksonville VFR Sectional. Now you’ve got to get back to DeLand, in central Florida, but a nasty fog came from the sea and covered most of the landscape. Both HXD and DED are still well within VFR requirements, but along the way, on nice alternates like Saint Simon’s or Jacksonville, the ceilings are already around a thousand feet. Would it be legal to go? Sure. Would it be clever? Let’s take a deeper look.

In many countries, you can’t fly VFR without reference to the ground. This is applicable even to sport, recreational, and student pilots in America, but usually after you are a private pilot you can. But what if you need to land? Well, as my personal minimums I never actually flew VFR over the clouds until I had an instrument rating and was on an aircraft certified for it. But that’s me. It wouldn’t be illegal to do it being only a private pilot. As you know, a student pilot must have three hours of IFR training and, during the check ride, has to find and fly to a VOR. And he or she is still far from of holding IFR flight privileges.

Many countries don’t get even close to that requirement and that is the reason why a person holding an FAA license based on a foreign country license has to follow the limitations of the base one. For Brazilian-based FAA certificate holders, seeing 50% of the ground on a VFR flight is exactly one of those. Tricky, right?

That taken out of the equation, let’s get practical. There’s a saying in Portuguese that goes, “who has two, has one; who has one, has none.” Yep, we are talking about engines here. So, from that perspective, flying a single engine piston over the clouds is quite a bet. That’s why, in my opinion, having an instrument rating, being proficient, and counting on an IFR-equipped airplane is essential. It is all about risk assessment. As we figured out by now, 2020 has very high chances to be the safest year ever: no one is flying. Every time we take off, we are taking risks. But some friends consider it too daring to fly over the clouds in a single engine piston, no matter how legal it is.

Of course, taking that approach, they wouldn’t fly a single engine piston on night cross countries or, even worse, in IMC. I have heard some denials on such endeavors. Now it is my turn to ask: what is the point of having an airplane if you can’t count on it most of the time? Yes, because half the time it’s already night, right? Take out the gray days and… what’s left?

It is pretty on top, but is it worth the risk?

I’m not advocating for you to take unnecessary risks, but depending on the reward, some are worth taking. Of course in your risk assessment you have to consider where and how to divert. DeLand has only GPS approaches nowadays. So, being able to request a local IFR and shoot the ILS at the neighboring Daytona Beach if ceilings drop greatly sounds reasonable from the instrument flying perspective.

Yet, one question remains unsolved. What if we lose an engine en route, over the layer? Is it possible? Of course it is. Is it likely? Not that much. After all, piston engines are easy complainers and it is quite rare for them to quit out of nowhere. The oil gauges or consumption, even the noise, the RPMs—in most cases, something will tell you well in advance that your only engine is not doing great. Besides, they are manufactured under very strict rules and maintained like that over the years, so the chances of them quitting are greatly minimized.

But let’s say it happened. Of the two rules of thumb, you just have to worry about one: best glide. You are not exactly looking for a field. Yet, you will start flying toward one and a flight following with a Mayday has good odds to get you on the ground safely if you are flying high enough and the ceilings are fair. It is a risk? Of course. Just like ETOPS is a risk. But it is a low risk, low enough—with rewards good enough— to be taken here and there. Yet, many of the pilots I heard who wouldn’t fly light GA airplanes in such conditions are seasoned airline pilots.

The ETOPS is a much lower risk, they will tell me. Yes, I tend to agree—although none of us would be exactly willing to fly hundreds of tons on one jet engine for three hours over the Arctic. But it is unfair to ask from general aviation the same level of safety we have in our airline offices. The regulations are different, so both can be viable. Imagine an airline half as safe as downtown traffic. Terrible, right? Now, imagine regulations as heavy as those applied to the airlines for a Cessna 152 owner. Impossible too, correct? And this is what the numbers show. GA is not as safe as it could be, and we must do whatever we can to fix this. Nevertheless, it is rare that GA crashes happen because someone lost their only engine while flying IMC. Far more common is loss of spatial orientation while on the clouds with the engines working perfectly, just to mention something to focus on.

The airline environment is so safe, so full of redundancies, that we, airline pilots, tend to get scared in a single engine, roaring, shivering, flying low and slow with little redundancy more than a pair of magnetos. But the truth is, the beauty of general aviation is to take us to places and experiences the airlines can’t. Once you embrace that, it all makes sense. For system managers who fly in class A airspace at nearly the speed of sound, meeting once again with the basics of real flying is a kind of magic one should not try to resist.

Friday Photo: the sun sets on a rewarding flight
Scroll to top