Blog - Latest News
You are here: Home1 / Article Archive2 / I was there3 / Remembering my brother, who taught me to fly 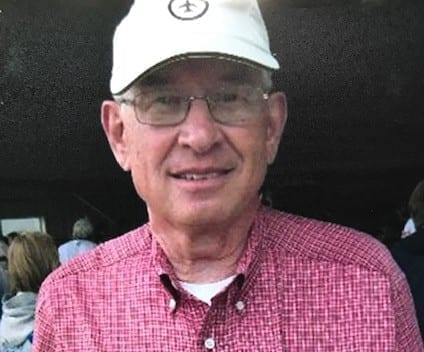 My CFII brother, Harry, taught me to fly. Before that though, we were pretty much just like most other brothers close in age. Growing up on a Northern Indiana dairy farm gave us plenty of times to interact, compete, learn new valuable things, and seek out adventures that would leave mountains of memories.

He was just two years ahead of me, and often things he was interested in, I was also. We had uncles that were involved in WWII aviation, with one as a flight gunnery instructor, a second as a B-29 crew chief, and a third as a a B-24 pilot. A small grass strip and a little flight school, run by our uncle and his friend, on the home farm made aviation a normal thing in our lives. We saw planes and pilots doing all sorts of things, some not considered safe or normal. Needless to say, we were quite interested and thought this was pretty much a normal thing.

When you grow up around Cubs and grass strips, aviation seems normal.

We got to drive tractors at a pretty young age (me at age 12), doing needed field work. We competed in making our tracks straight when plowing ground, mowing, or raking hay. We tried being efficient when exchanging wagons behind field harvesters, or making a 180-degree turn while running field equipment. We got real handy running a loader or spreader, driving a truck, or even maintaining machinery. We rode motor scooters and ponies. We knew what hard work was to be. This all became a good foundation as we became men and chose our life’s work.

Before age sixteen Harry began flight lessons, soloed shortly after, and got his private license at 17. I watched him solo a Piper Cub and a Tri-Pacer on one day. You could already see he was in his element. Finishing high school in the early 1960s, he became a line boy for my uncle at a neighboring airport, built time, and began working toward getting his A&P certification as well.

It was mid-1960s when Uncle Sam came calling. Drafted into the US Army, he was fortunate to end up in Alaska for 13 months at a supply depot. They provided parts to the missile contingent in the area during that Cold War period. While on leave, he was hired by a local flight school and flight charter service in Anchorage, completed his commercial ticket, and got his CFI. He did bush flying and provided flight lessons for several fellow soldiers, even his unit commander.

During his time in Alaska he had the misfortune to place a Cessna 170 on its back in a peat bog while transporting hunters to a remote location. The soft ground wasn’t suitable for landing an aircraft. Bringing in reinforcements, he said they righted the aircraft using two long poles and some hefty rope, then used two sheets of plywood cut down the middle to roll the plane a quarter mile, eight feet at a time. Except for some soft earth in the nose and on the tail, the plane was cleaned off, checked out, and flown back to its home field.

Back from the Army to the lower 48 states, he once again began working for our uncle. He once shared an episode there of another upset. Seems a student pilot in a Cessna had just returned from a local flight as a thunderstorm was arriving at the airport. Slipping out to the arriving plane as the student came by the airport terminal, and climbing in to assist hangaring the aircraft, Harry and the student quickly found themselves upside down on the ramp as the squall line arrived and began its downpour. As normally expected, the student was taxiing with the elevator up as if the wind was from the aircraft front. But this time the squall line was coming from the rear, which changed the physics and the up elevator made it easy for the wind to end the flight with the Cessna on its back.

Harry began working part time for a charter outfit flying Learjets and building hours. He briefly managed a neighboring airport as part of our uncle’s company. Then he was hired by a few local companies as a corporate pilot flying first a Cessna 195, progressing to a Cessna 421, then Beech King Air, and finally a Hawker jet. One of his early bosses told him that the reason he accepted any flight cancellations from Harry was that he truly trusted him completely. Harry met his wife and married during those years. He retired in his early sixties as corporate aviation manager, as health issues affected his flight status.

During Harry’s years as a corporate pilot he had the unfortunate occurrence of running off a snowy runway through a snow bank in Port Huron Michigan in the Cessna 421. A wet runway at his departure airport provided frozen brakes at his destination. His boss was sympathetic as the insurance settlement made it easier to justify acquiring a newer, updated aircraft.

Another brief story for Harry involved landing in a strong crosswind with several passengers. It took the third approach to safely land the plane, which was greeted with a resounding applause by his passengers. He had told them if he was unable to make that landing, they would have to divert to another airport with a runway more favorable to the wind, further delaying their arrival home.

On another occasion he took off into strong headwind in a Cessna 150. Once at a reasonable altitude he dropped the flaps, cut the power, and proceeded to back up enough to alight on the same runway without completing a pattern or making a turn. I would have paid to have seen that.

A lifetime in aviation meant a lot of interesting stories.

All through Harry’s corporate flying career he had a robust following of those actively using his talents to pursue their aviation interests. As a CFII he signed off many achievements by his students and fellow aviators. I can only imagine the number of students he trained in an environment where he allowed them to try and end his life early.

I took flight lessons from my brother later in life, acquiring my private license at age 62. Now age 73 and still flying a little, I look back fondly at those hours in training. He was a great instructor, demanding but extremely knowledgeable and experienced in a whole variety of aircraft.

One of my most ingrained episodes with him was when I flared a Cherokee high on approach, then lowered the nose to compensate for the ballooning. As expected, the aircraft arrived on its nose gear first, followed by the main gear being planted on the runway. My brother’s loud response, heard even without headgear, was “What the HELL was THAT?!” This was followed by a needed lesson on how to adjust the landing to avoid a repeat of that poor performance, and his apology to the nose wheel as he manned the towbar while hangaring the plane.

We were very fortunate to live just a few states away from Oshkosh. Most years found us making that trip by car and enjoying at least three days in aviation wonderland. In 2008 we flew a beautiful Beech Super 18S tri-gear (N90TT) for a friend of Harry’s to the big show, where it won a bronze Lindy. I rode as copilot, handling the radios, and have an hour logged flying that beautiful aircraft on our return trip. Good memories.

We lost my brother to leukemia in 2014, just short of his 70th birthday. We celebrated his life in the very corporate hangar in which he had spent many hours. We had two missing man flyovers, one before and one after the memorial service. His trusty red Jeep Cherokee and a small taildragger were on display, along with a table from the airport terminal where he shared morning hangar tales and coffee and donuts with his aviation friends as was his routine. His pocket protector with his ever-present pens and notepad were laid upon the table beside of his aviation handheld radio, and his cap and leather flight jacket hung over a chair.

I had the honor to give the eulogy. I asked the some 150 people in attendance how many had taken flight lessons, had biennial reviews, or got signed off on a new certificate from him. Over one-third of the attendees raised their hands. On display was a series of photos of Harry propping a J-3 Cub with an inscription: “Harry A. Sheetz, June 13, 1944 – May 21, 2014, Pilot, Mentor, Friend.” The Warsaw (IN) Municipal Airport community was blessed by his life for over 40 years.

He had in his flying career amassed 18,250 flight hours. That’s two years and a month in the air. His widow gave me his logbooks, and I often pull them out to look inside. Two things stand out. Reading just over halfway through his last large completed logbook, I have identified over 200 different airports he had flown into during his corporate pilot career. I suspect everything from a kit plane to various Pipers, Cessnas, Mooneys, and others can be found in those logbooks. There are likely many more entries of interest yet to be found.

I was the last of the family to see him alive in his hospital bed. The equipment keeping him alive was being shut down and no further treatment was offered. My eyes are moist thinking of him. His final flight entry was from a local flight in a Cessna 172 on April 12, 2014. A simple entry that evokes a familiar, serene scene reads “night rides & photo.” Love and miss you brother.

Michael Sheetz
Michael Sheetz is a graduate of Bremen Senior High School in Bremen, IN and Purdue University. Raised on a dairy farm with a grass strip on it, Mike has always had an interest in aviation. He has been involved in various businesses and retired in 2013 after 11 years with Edward Jones in Nappanee, IN doing financial planning. He chaired the Wings and Wheels Show for the town’s Apple Festival for those 11 years. Mike learned to fly with his CFI brother, Harry, getting his private ticket at age 62. He now lives on the east side of Indianapolis, where he enjoys golf and aviation activities, which include being involved in a flying club, an EAA Chapter, and AOPA.

Go or No Go: a windy trip
Scroll to top