Blog - Latest News
You are here: Home1 / Article Archive2 / I was there3 / Growing up near a grass strip 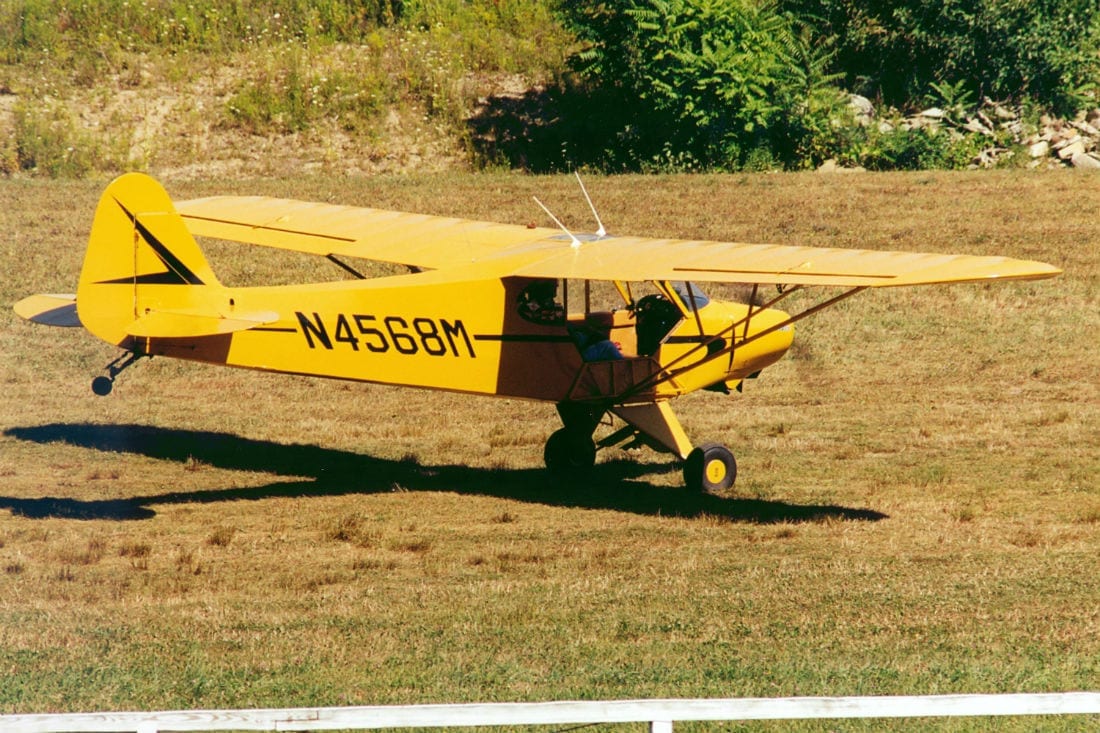 I am one of the very early baby boomers, having been born in 1946. I really knew very little about the war back then, but grew to know many relatives and neighbors who had been part of that time in history. My dad’s older brother had been a gunnery instructor during the war. He had been trained as a pilot, but was too valuable as an instructor to be sent to the front. His commanding officer kept getting his orders changed so as to retain him.

My uncle and his friend opened up a flight training school after the war on our family’s Northern Indiana dairy farm with a 3000-foot grass strip and farm-engineered hangar. Many former military pilots and a lot of local people took lessons and rented planes. I was enchanted with all the activity.

My father, a dairy farmer and family man, supported the war effort by remaining on the farm supplying milk and meat. He learned to fly and was quite a good stick in his own right. I had several opportunities to get some early flight instruction from him.

The first two aircraft the flight school had were a Piper Super Cruiser and a PA-11 Cub. Once a Piper Tri-Pacer became available, the Cruiser was traded so as to add the faster four-place. Over the 1950s and early 1960s, the field was a very active place. I often witnessed some interesting aircraft activities.

The Tri-Pacer does drop like a rock with no power.

One of the first sights of an aircraft doing something it was not designed to do involves the Tri-Pacer leisurely sliding on its nose. I was busy driving a tractor in an adjacent field looking directly at the grass strip. I watched as the Tri-Pacer, coming in on approach, seem to descend a little early to the runway. It settled on its mains, but once slowed it dropped on its nose, sliding some 200 feet over the sod.

I approached the aircraft and the two pilots to inquire about their arrival. Apparently the student pilot had allowed the speed to decay, allowing the aircraft to clip a wooden fence post. Fortunately the post gave way and lowered the wire fencing enough to clear the main gear. The nose gear took a beating, as did the prop, but as I recall, the rest of the plane was spared – as were the pilots.

A second mishap involved a young neighbor who had learned to fly. He was using the PA-11 Cub to help round up some feeder calves. Seems that another neighbor had received a load of range-fed calves to finish out in his feeder lot. Of course, coming off the wide open range, these animals were quite squirrelly. Apparently they got out of the lot into a large field of rye that was held in set-aside, out of crop production. Well, allowed to mature, this rye can reach upwards of six feet tall. Driving a tractor chasing feeders can be problematic.

Apparently some of the rascals just would have nothing to do with the pen. So, “Cub Cowboy” said he could use the aircraft to alert others of feeder calf whereabouts. All went well except for one feeder calf in the corner of the field. Dropping low over the animal, “Cub Cowboy” got the main gear and then the prop tangled in the rye. With full power on, and after hitting the steer, the Cub somehow continued airborne. The wrapped rye slung off the prop and a slow steep climb to avoid a neighbor’s house began. As you would suspect, the Cub stalled in a tree right next to the house, finally making its way tail-first back to the ground.

“Cub Cowboy” got a knock on his head, and the PA-11 got a wickedly bent fuselage. As I recall, the feeder steer didn’t make it. I think that pretty much ended any steer chasing. Oh yeah, my dad was listening to a New Orleans radio station on New Year’s that year. They were reminiscing about events of the last year, and, yep, you guessed it, the Flying Cowboy from Indiana was one topic cited.

Another incident also involved the PA-11 Cub – this time by a local flying dentist. I was present to watch this episode unfold. Seems the dentist did his mag check while facing downwind at the approach end of the grass strip. Reducing power slightly, he made a quick 180 turn and started takeoff roll. Some of you may know that often the end rows of corn are not as large as others. Now with full power on, tail up, and moving briskly, the Cub accelerated down the left side of the grass strip. The left wing sticking out over the corn began to drag as taller corn began to tug on the wing.

I’m sure a lot of right rudder was in play, but the corn won. The little Cub finally circled to the left, main gear catching the dead furrow left by a plow, went up on its nose, pirouetted a full 360 and came back down on its gear. Well, I was about as shocked as the pilot. Needless to say the Cub needed some nose repairs.

Still another incident involved a J-3 Cub that was hangared on the farm. We three elementary school kids had been biking around the farm when the J-3’s pilot/owner showed up. We helped pull the plane from the hangar and turn it toward the west and the grass strip. The pilot crawled in the back seat, did his warm up, and proceeded to firewall the throttle without even taking the runway. We were all surprised at this. As it was there was about 150 feet of taxiway to get to the runway, and that taxiway lay due west.

A field of early wheat lay across the other side of the grass strip. Apparently, the pilot had done this routine often during the winter and thought nothing of doing it again. If he didn’t get off by the time he reached the opposite side of the runway, a short run over the very short wheat was not a problem in the cold.

Now this would be different. This was now Spring. Accelerating down the taxiway the little J-3 couldn’t get airborne before reaching the wheat. Wheat immediately wrapped around the main gear pulling the aircraft further down, and the Cub dipped its head to the ground and went vertical.

Operating off a grass strip introduces an entirely new set of concerns.

It stood straight up for what seemed like 10 or more seconds as if it was trying to decide to go on over or not. Finally it fell back onto its main gear almost silently as the now early headed out wheat cushioned its fall. We three pre-teens rushed out to assist the pilot. As we arrived, the pilot stepped out over the door sill onto the ground. Stepping back and looking at his now damaged aircraft we heard him say in a raised voice, “Now that was a damned stupid thing to do!”

The Cub had a broken updraft intake manifold, a damaged and plugged-up oil radiator, and a lower cowling dent. But, that wooden prop had stopped straight horizontal and didn’t even have a crack in it. Still amazes me about that yet today.

The pilot had failed to consider the now warmer air, and the wheat was no longer just some short grass; it was in early stage of heading out. These changed the equation just enough to spoil one pilot’s plans for a mid-morning flight around the patch.

Finally, one more story. My dad had to replace the very front casting on our Farmall M tractor. It had gotten cracked while confronting a concrete wall. (No, I didn’t do it!) Anyway, my dad flew the PA-11 Cub over to the supplier in Illinois, and had someone help him strap it in the back seat. I mean, come on, I think that thing weighed about 400 pounds. Anyway, my dad was able to get the Cub back in the air after a long takeoff roll and nurse it back to Indiana. Who says Cubs can’t do farm work?

My fascination with flying was stirred way back as a lad, but my venture into piloting waited over 50 years. I was fortunate to have my older brother as my CFI get me through training and I received my private license at age 62. I treasure those flights of instruction with him, but we lost him to leukemia in 2014. Now retired, I fly out of KMQJ on the east side of Indianapolis after joining a flight club, and am active with EAA and AOPA.

I wonder if others have memories of those very different times in general aviation.

Michael Sheetz
Michael Sheetz is a graduate of Bremen Senior High School in Bremen, IN and Purdue University. Raised on a dairy farm with a grass strip on it, Mike has always had an interest in aviation. He has been involved in various businesses and retired in 2013 after 11 years with Edward Jones in Nappanee, IN doing financial planning. He chaired the Wings and Wheels Show for the town’s Apple Festival for those 11 years. Mike learned to fly with his CFI brother, Harry, getting his private ticket at age 62. He now lives on the east side of Indianapolis, where he enjoys golf and aviation activities, which include being involved in a flying club, an EAA Chapter, and AOPA.