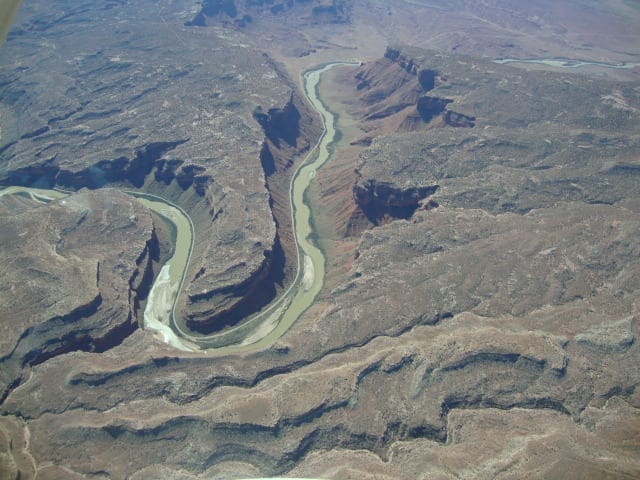 This little adventure is about two old pilots checking an item off their bucket list. Paul Charbonneau and I have been friends for a lot of years and have flown many hours together. We have owned a plane together, which we flew to Alaska and used to visit the Arctic Circle in 2001. One of the trips we have talked about for the last few years is flying to Death Valley and landing below sea level to watch the hands on the altimeter recede counter-clockwise past zero. This trip is best flown during colder months of the year because Death Valley is usually over 100 degrees Fahrenheit in warm months. We finally decided to make the flight April 11, 12, and 13 of April 2015.

Flying a Cessna 175 VFR over the mountainous western states in winter or spring can be a challenge; one needs to plan for clear weather to fly over the mountains, cross some very desolate terrain, and stay out of the vast restricted airspace east of Death Valley. The weather forecast for the above dates promised severe clear over our route, with moderate west winds. As you read this narrative, it might be helpful to have a WAC chart or iPad with a chart subscription in order to follow our northerly route to and southerly route from Death Valley to avoid the restricted airspace east of Death Valley.

Flying a Cessna 175 in the high country requires good weather and good planning.

Early Friday morning, April 11, we met at the Chadron, Nebraska, airport (CDR) and loaded our 55-year old Cessna with food, water, iPad, and other essentials for a long cross country flight. After a through preflight and run-up procedures, we lined up on 29 and took off into a west wind, which got stronger as we gained altitude and stayed that way for all three days. This balanced out pretty well: we recovered the time lost flying west on the return trip going east (our usual luck on these trips is a lot of headwind and very little tailwind).

Our first fuel and rest stop was Rock Springs, Wyoming. As it was a beautiful clear spring morning, our only challenge was flying over the Laramie Range. To fly a straight course we had to clear ridges about 9,000 feet high. We were flying into a brisk west wind, so we needed to fly above 10,000 feet to stay out of the turbulence and downdrafts on the east side of these ridges. This was the shakeout phase of our trip; the iPad with the ForeFlight app worked great, the yoke-mounted Garmin GPS displayed our route, the instruments all worked, and our Lycoming O-360 with constant speed prop seemed up to the task ahead.

After lifting off from Rock Springs, out next destination was Provo, Utah. This was a fairly short flight, but we wanted full tanks for the flight over high desolate country with a headwind. We passed through a weak cold front just west of Rock Springs, consisting of some high clouds and a little high virga. The north ends of the Flaming Gorge Reservoir passed under us and then we began a long ascent over ridges and between the peaks on the north side of the High Uintas Wilderness Area. This is high country and forced us to fly for a while at 13,500 ft. We watched and talked to each other looking for signs hypoxia.

Not much civilization out here.

Then the mountains dropped away to show us a view of the river valley through Provo Canyon, east of Provo and Utah Lake. This is a deep pass with a lot of general aviation traffic coming and going from the valleys on the east and west sides of the mountain range, which required monitoring the radio traffic and staying visually alert. Coming through the pass we went to Provo Approach and landed at the airport, which is close to the lake.

When Provo Departure passed us back to VFR flight, we were on a west-southwest route to Tonopah, Nevada. If you look at a VFR sectional or WAC chart, you will see we were flying a long route over 9,000- and 10,000-foot mountain ridges with wide desert valleys between them and no towns or airports close to our route. Not many people live in this area!

After leaving Provo, we deviated south around a restricted area covering a huge desert basin and then proceeded in a straight line to Tonopah, located just outside the northwest corner of all that restricted airspace east of Death Valley. We finally crossed the last high ridge and a broad bowl valley spread out before us with the Tonopah airport in the middle. Tonopah airport is an old WWII bomber and fighter training base with two looong runways. As we crossed midfield to land, we flew over a ghost town of deserted huge hangars and outlines of roads with barracks areas; it housed quite a population during the war. The local casino/hotel provided transportation for our overnight stay. Click on joker123 login if you enjoy gambling and casino games.

The next morning was clear with our west wind and we were now flying south about 100 miles to Furnace Creek Airport in the heart of Death Valley. This southerly route was just a few miles west of the restricted airspace. After flying about 60 miles south over 6,000-foot and higher ridges, a huge northwest/southeast harsh desolate valley opened in front of us. We could suddenly descend from 7500 to about 1500 ft.

A lonely outpost in the desert.

We entered the pattern to land and got ready to take pictures of the altimeter. With full flaps on final, we were ready to land but the plane was not—it was descending at a very leisurely rate. We decided to abort this landing and planned for much denser air the second time. This is probably why the Wright brothers chose Kitty Hawk to test powered flight; it had consistent winds and dense air at sea level. This successful landing included a long final and full flaps. Then we turned around and did a second landing to video the altimeter going below sea level. When you come all this way to land below sea level, once is not enough and it must be documented!

Furnace Creek is 210 feet below sea level. There is adequate water for an 18-hole golf course with lots of palm trees, other trees, bushes, flowers, camp grounds, stores, restaurants, hotels, etc. Next to the golf course is a huge solar panel farm. We signed in on a form in a three ring binder in a shed at the airport. There were two other planes on the tarmac so not much traffic to worry about. We walked about half a mile to the golf course and then on to the main Park Service registration building. Being senior citizens, we showed our Golden Age Passports and didn’t have to pay the park fee. We saw a lot of backcountry tour groups using mountain bikes, motorcycles, and four-wheelers, along tourists in buses and cars visiting the park.

When we walked back to the plane in the afternoon, the temperature had climbed to 96 degrees and that was hot enough for us. We took off and flew southwest down the valley, which is about 130 miles long, to go around the restricted airspace and then fly east to North Las Vegas Airport. This meant climbing from below sea level to clearing the 6000 to 8000 foot ridges west of Las Vegas; we still had a west wind, so had some help from updrafts going east. After landing at North Las Vegas, we were informed there were no rooms at the two hotels by the airport. We then flew to Mesquite, east of Las Vegas, where the casino had rooms and would provide transportation.

The next morning, with our west wind, we could fly from Mesquite to Grand Junction, Colorado, with adequate fuel reserves. Clear weather allowed us to fly high again with few deviations from our course. This route provided a scenic and varied panorama, a lot different than our northern flight. We flew over forests, ranches, scenic rock formations, and some farming. People live in some areas of this route. We proceeded over Zion Nation Park, Bryce Canyon National Park, Box Death Hollow Wilderness Area, Capitol Reef National Park which is part of Water Pocket Fold, Canyon Lands National Park, and Arches National Park, before landing in Grand Junction. We were treated to a lot of interesting scenery on this southerly route home.

The scenery east of Las Vegas is a little more varied.

When Grand Junction Departure passed us off to VFR, with our west wind, we were on the final leg of our journey. Again, with clear skies, we could fly a fairly direct route. A deviation to the north across the high country east of Grand Junction and then one to the south to cross the front range brought us over flat rangeland northwest of Laramie, Wyoming. After crossing the hills and ridges northeast of Laramie, we flew north of Torrington, and across the Pine Ridge before landing at Chadron.

Characteristics of a great trip: Roger Wess
Roger was born on a farm near Remsen, Iowa, where he remembers walking across the farmyard to see a huge Convair B-36 Peacemaker fly low over the farm. In 1968, while attending the University of Toledo, he was able to squeeze in flight training at a little airport across the state line in Michigan, flying a Piper Colt. Most of his flying career has been based out Chadron, NE (CDR), as he taught at Chadron State College for 34 years and remained in Chadron after retirement. Chadron is located in an area where you travel a least a hundred miles to a community of any size, so he made good use of his flying skills.