Blog - Latest News
You are here: Home1 / Article Archive2 / Go or No Go3 / Go or No Go: California convection? 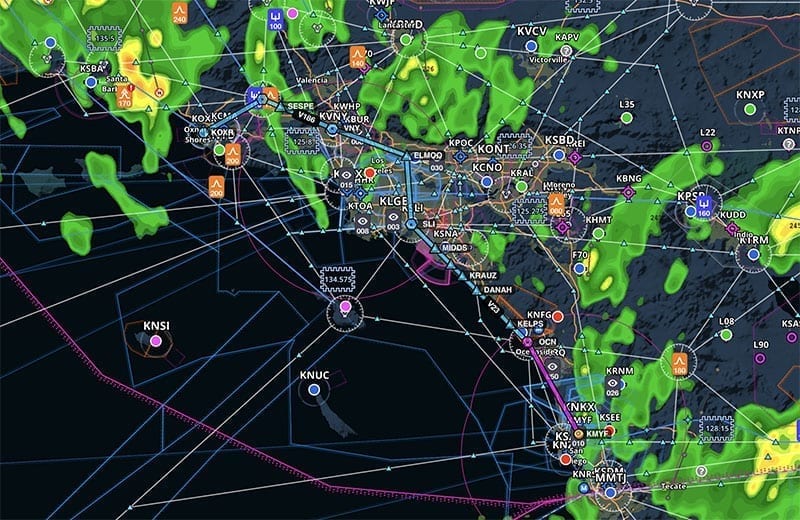 It’s a perfect day for general aviation: your trip from San Diego (MYF) to Oxnard (OXR), California, should take just under an hour in your Cirrus SR22, which is a huge improvement over the typical 4-5 hour drive. The weather isn’t great today, but at first glance it doesn’t look impossible. After all, this is why you have an instrument rating and a capable airplane.

You’ll be flying IFR today, probably in the 4000-8000 foot range, depending on the weather. Proposed departure time is 2130Z, about 2:30 local time. Read the weather reports below and tell us if you would fly the trip or cancel.

The map on ForeFlight shows rain, IFR conditions and pilot reports for ice and turbulence. A typical route will take you up the coast and then east of LAX, before turning back to the northwest.

The surface analysis shows a low pressure system over Las Vegas and an occluded front coming in from the southwest.

Prog charts show rain and scattered storms over Southern California over the next 24 hours.

The radar image shows plenty of rain, but it is scattered. Your route actually looks fairly clear. It’s also noteworthy that the rain seems to be moving from south to north.

The visible satellite shows plenty of clouds in California, so IFR is definitely the right answer today.

The infrared picture shows some vertical development to the south, but along your route the clouds appear to be lower level.

These two threats are always on your mind when flying around a front. First, a look at icing PIREPs. There are plenty today, but almost all are north of your destination and above 10,000 feet.

Sure enough, the forecast icing layer in ForeFlight shows ice at 10,000 feet, especially to the north.

Turbulence PIREPs are also numerous, including a few severe ones. But again, the worst looks to be up north and up high.

The turbulence layer in ForeFlight shows the potential for some bumps, but nothing too bad at your proposed altitudes.

Last comes the airport weather. For an overview of the conditions, you check the chart in ForeFlight’s Imagery section. It shows pockets of IFR conditions to the south and up by your destination, but only spotty areas of low weather around Los Angeles.

The forecast chart shows more details about ceilings and tops, which are reasonably low in Southern California.

Finally, it’s time to read some text weather. Your departure airport is definitely IFR, with showers moving through the area.

Along your route, weather is marginal VFR with better visibility and lighter winds. There is definitely a layer around 1000-1500 feet.

At your destination, conditions are pretty good right now, with good visibility and layered clouds. The forecast calls for rain and lower ceilings at the afternoon wears on, though.

Given the area, it’s worth a quick check on the terrain along your route. This is helpful for considering alternates should the weather be worse than forecast. The Profile view in ForeFlight shows a good picture. Here’s 6000 feet:

Time to make the decision. It’s IFR out there, with showers and some wind. But it’s above minimums and your route appears to be in between the heaviest rain. Do you take off or cancel? Add a comment below and share your thought process.

Flying for Air America—where the cargo was always interesting

Did I really hear that?
Scroll to top