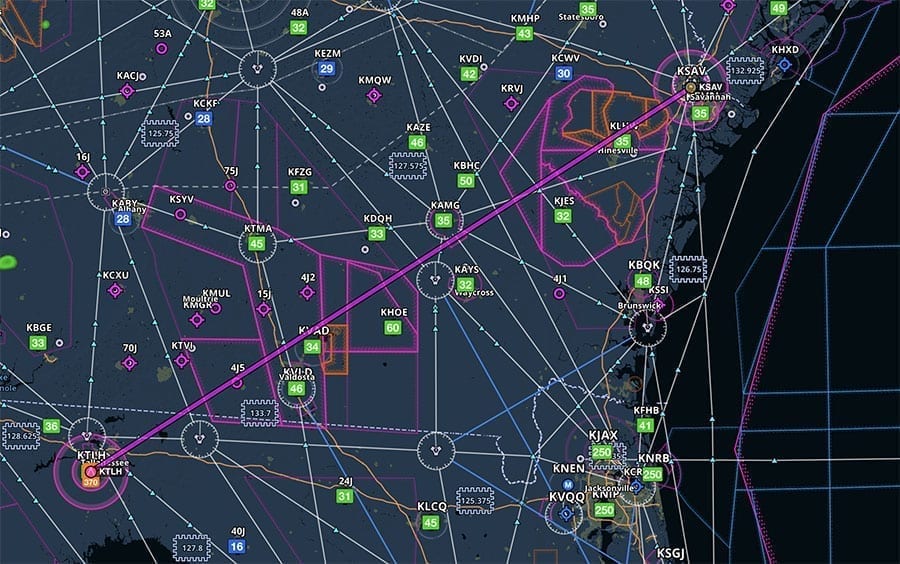 Traveling by VFR airplane means staying flexible, especially in the winter months. That’s why you’re at the airport today, two days ahead of your planned departure: with a huge line of rain headed for the southeastern United States, you’ve cut short your visit to Savannah, Georgia, to see if you can get home to Tallahassee, Florida. Is there a safe way to make it back before the bad weather moves in?

You’re current and familiar with the route of flight, but this will have to be a strictly VFR flight since you do not have an instrument rating. The flight should take just over two hours in your Cessna 172S, and given the 2115Z proposed takeoff time, you would be landing just before sunset at your destination. Your airplane is well equipped with a Garmin GTN 650 GPS, a Bendix/King autopilot, and datalink weather on your iPad.

Read the weather briefing below, then tell us what you would do: go or no go?

The first look at ForeFlight shows nothing noteworthy around Savannah or along your route, with no rain and plenty of green METAR symbols.

The surface analysis shows some weather is brewing though, with a low pressure system and a long cold front to the west.

The prog charts show this weather system moving into the Georgia/Florida area overnight.

While the front is forecast to stall a bit, rain and presumably IFR conditions should appear tomorrow and even into the next day.

The regional radar picture shows lots of green and yellow, but not along your route.

The infrared satellite does show clouds, but mostly near your destination.

The visible satellite shows a few more clouds near your departure airport, but more scattered clouds over southeastern Georgia.

While you’re reviewing the big picture, AIRMETs are another good resource. The AIRMET for IFR conditions shows plenty of warnings to the northwest, but nothing along your route.

The wind is blowing just a bit, so it’s also worth checking for any potential turbulence. The G-AIRMET does show the possibility for a few bumps and low level wind shear around Savannah, but you should be out of it relatively soon after takeoff.

With no rain or convective activity around, it looks like avoiding clouds and staying VFR will be the main focus today. Fortunately, ForeFlight has recently added some new forecast maps that are particularly helpful for planning a VFR flight. First up is the cloud forecast map, which shows both estimated bases and tops. The first forecast period is right about your time of departure, and shows the same scattered clouds along your route, but with some bases below 3000 feet.

The next map shows conditions about an hour after your ETA, with very thin clouds but again some lower ceilings near your destination.

There’s also a similar forecast product for surface conditions. Since your flight will most likely be at a low level, this is also an important chart to consult. Again, the first one shows conditions around your ETD.

And the next one is for slightly after your ETA in Tallahassee.

Given the varying weather reports about clouds, it’s always wise to review the PIREPs to see what other aircraft have encountered. Unfortunately, there aren’t many near your route today.

The same goes for turbulence PIREPs, but at least this might indicate a good ride.

Last—and certainly not least—comes a look at the METARs and TAFs. Here’s where the rubber meets the road, but at least the weather around Savannah is quite good. The forecast calls for conditions to drop below VFR minimums, but not until overnight.

Weather at your destination features that same broken layer at 3500, but a scattered layer below that. The TAF also shows some unappealing weather, although the truly low IFR conditions aren’t forecast to roll in until 9pm local, a few hours after your estimated arrival.

Given the TAF, you decide to look a little further to the west to get a sense of the weather that might be coming your way. Conditions along the Gulf Coast are worse than Tallahassee, with ceilings below 3000 feet, although the visibility is still excellent and there is no rain. Is that because of the ocean air or a sign of things to come?

It’s time to make a decision. It looks like if you’re going to make it home, it will be either this afternoon or a few days later after the big front moves through. Weather at your departure and en route seems to be VFR, although the ceiling is not much higher than 3500 feet. Weather at your destination is marginal VFR with good visibility and no rain, but the forecast doesn’t inspire confidence.

Is it a go, a no go, or a go part of the way? Add your comment below and explain your thought process.

The promise of proficiency

The little airplane that could… and still does!
Scroll to top