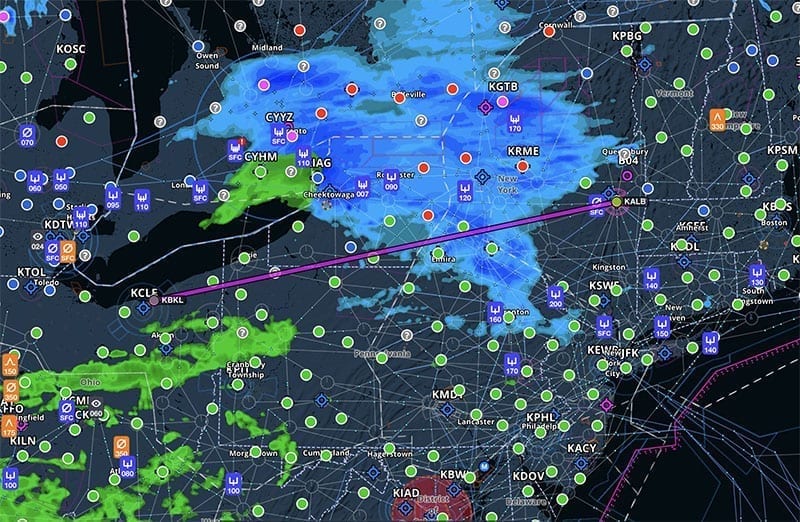 It’s December and you live in Albany, New York, so it’s no surprise there’s snow in the forecast today, but you’re more focused on the aviation weather than the chance of a few inches on the ground. Your plan today is to fly your 1980 Piper Aztec from ALB to BKL in Cleveland, Ohio. You fly 200 hours per year in the trusty Aztec, so you’re experienced and instrument proficient. Will the weather cooperate today? Read the forecast below and add a comment explaining your thought process and your decision. Your estimated time of departure is 9 am eastern, 1400Z.

The radar image in ForeFlight shows snow to the west of Albany, with more to the north. As you approach western Pennsylvania and northern Ohio, the snow disappears, then changes over to rain. There appear to be IFR ceilings to the north, but VFR along most of your route and south.

The surface analysis shows a low pressure system and associated cold front moving across the Midwest, which seems to be driving the weather.

The prog charts show the front moving fairly quickly across the eastern half of the United States, but there’s definitely snow on the way for New York.

The forecast for tomorrow morning shows the front east of ALB.

The radar shows nothing convective, but lots of precipitation. That means icing is the main concern today—your Aztec has hot props and boots but not a full deice package. A look at the satellite picture might help determine how tall the clouds are and how widespread they are. First up is the infrared image, which shows clouds across your entire route, with some higher tops in Ohio.

You’re used to studying icing forecasts, so the next step is to dive into all those charts. First, a look at the Graphical AIRMET is in order. It shows the potential for icing between 8,000 and 17,000 along most of your route, with icing lower to the north.

Next is the freezing level chart – is there any chance  you can stay above freezing today?

Next up is the icing forecast map layer in ForeFlight, an excellent tool that shows the forecast severity of icing at different altitudes. At 4,000 feet the exposure seems fairly minor.

At 6,000 feet you might still be below the icing according to the AIRMET, but the chart is less clear.

The 8,000 foot map layer shows a less enticing picture, but the worst is clearly to the north of your route. There might be a southerly route that would avoid some of the darker blue.

While those ForeFlight charts are helpful, they show potential icing severity. It’s also helpful to look at icing probability – what the chances are of encountering icing, not whether it will be light/moderate/severe. First up is the 5,000 foot image.

Next is the 7,000 foot image, which shows some icing over most of New York, but a fairly clear route over Pennsylvania and Ohio.

The last step in the icing review is to look at Pilot Reports (PIREPs). There are a number of them, most of them showing ice starting between 8,000 and 9,000 feet, with tops in the mid-teens.

That’s a look at the weather aloft; the last step is to consider surface weather. Albany right now is showing good VFR conditions, but the forecast is not as good.

At Burke Lakefront in Cleveland, conditions are good and forecast to stay that way.

It’s time to make the call. Yes, there is icing in the forecast, but that’s true six months of the year in New York. You could go to Cleveland at 6,000 or even 4,000 feet and try to stay under the ice or you could plan a route that goes south of the heavier snow. But then again, ice is not to be messed with and the weather looks better tomorrow. Is it a go or no go?

Who Needs Charts? Under the Rules You Probably Don’t

Always watching: why I wasn’t really alone on my first local solo fli...
Scroll to top