Blog - Latest News
You are here: Home1 / Article Archive2 / I was there3 / Another day in the life of an air commando 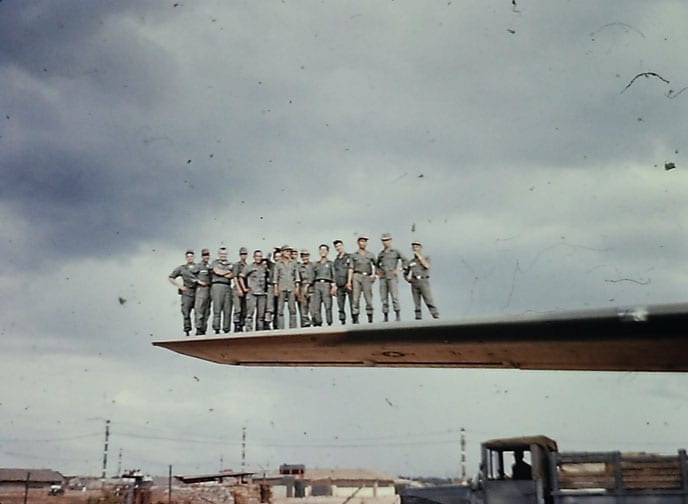 I was stationed in Saigon, Vietnam, with the 19th Air Commando Squadron flying C-123 aircraft.

The missions that we flew each day were given to us on a printout. Each segment of the missions was on a separate line that we called a frag (fragment) mission. This day our first frag mission was to fly from Saigon to Thủ Dầu Một empty. The cargo we were to pick up was floor-loaded rice bags. The Loadmaster had removed the pallet rollers that we usually had on the floor. Thủ Dầu Một is approximately 10 miles north of Saigon, so it only took us a few minutes to get up to Thủ Dầu Một. The runway there is a 5000-foot long asphalt strip that was built by the Japanese during World War II.

Well that’s going to be a problem.

After landing, I noticed a truck on the side of the ramp and an individual waving at me. I taxied over to where the truck was, swung the airplane around 180 degrees, and with reverse thrust started backing towards the truck. The loadmaster had opened the upper part of the ramp so I could see to navigate back towards the truck and stop with appropriate distance still remaining between the aircraft and truck. I started through the aircraft shutdown procedures and when I pulled the mixtures to shut off, and as the number one engine came to a stop, I could hear a hissing noise similar to escaping air.

I immediately knew that the only thing that could be making that noise was a hole in the tire. I still had power to the avionics so I made a call to the ALCC (airlift command center) and requested a tire and jack be delivered. I was told that they would have it to me shortly.

After looking at the situation and trying to figure out what we could do to get the jack under the jack pad, I had an idea about using the kickers. The kickers were there to load and unload the bags of rice. The C-123 aircraft has a hatch that provides access to the top of the fuselage and the wings. I told the interpreter that I wanted to use the kickers to go up on the wing to add weight to that side of the aircraft and tilt it down to the right side. He told the kickers what I wanted to do and they enthusiastically volunteered. I had the loadmaster guide them to the ladder and open the hatch.

The first group were not enough to get the jack under so I told them to run some more up.

The flight mechanic put the jack under the jack pad and began pumping. As you know, the aircraft hydraulic jacks take a lot of pumping to get any results. The flight mechanic pumped rapidly, but soon was sweaty and tired. He had only raised the jack about a quarter to a half an inch. The kickers were very interested in this procedure. I asked the interpreter if the kickers wanted to take a time at the jack. Again they were enthusiastically in agreement. They lined up and took turns until each was tired and stopped. They then went to the back of the line again. After we finally got the jack high enough to change the tire, we needed to get back to the mission.

The kickers started loading the rice into the aircraft. The bags of rice weighed 220 pounds each. As you can determine by looking at the pictures, these kickers were not very big. One of the kickers would lean over, four of them would grab a corner each of the bags, and lift the bag up and put it on the back of the leaning kicker. He would run the bag up the ramp and into the aircraft and would toss it in the position that the loadmaster pointed out to him. He tossed it by bending his knees and then extended them rapidly as he turned his upper part of his body toward the spot the loadmaster pointed out. After loading, the kickers would then fly with us to our destination to unload the aircraft since we had no equipment to do so.