Blog - Latest News
You are here: Home1 / Article Archive2 / I was there3 / A bomber crew Christmas 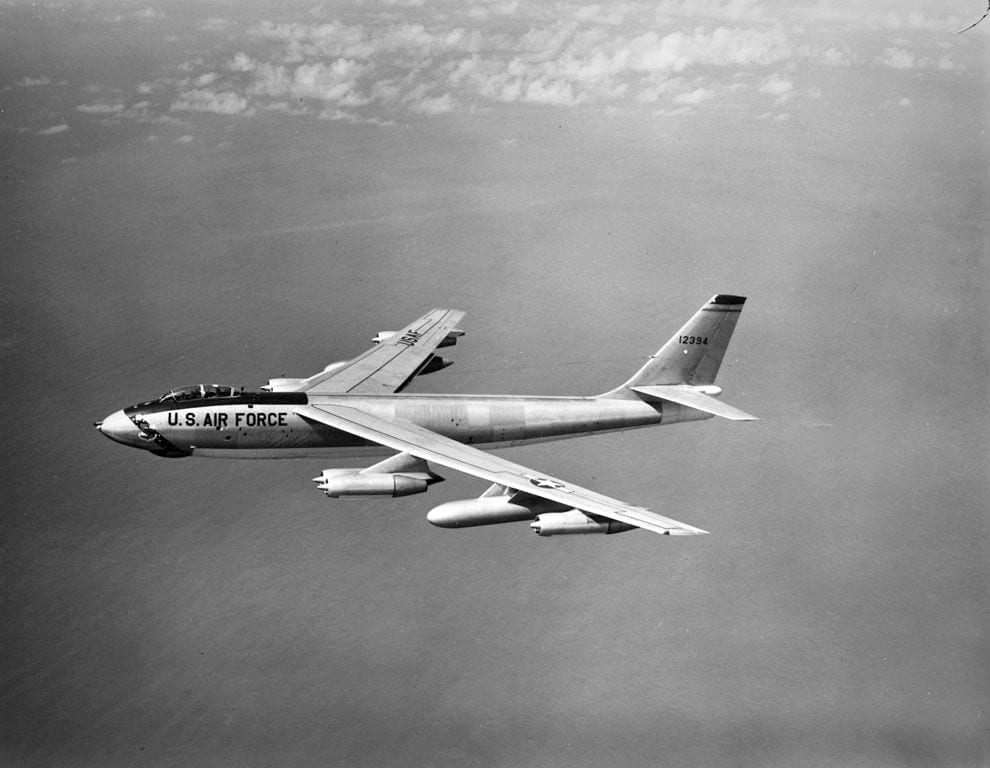 It was a week before Christmas 1964, and we had some time left to fly after returning to base from a typical nine-hour training mission. I talked the crew into flying at about 1,000 feet not far from the air base, to scout the snow-covered countryside for a Christmas tree. I was the copilot on the B-47E, and we started to look for the right size tree in a remote field away from the farmhouses, out in the open range. The mission was to find one, go there after landing, cut it down, and take it home for Christmas.

A great way to scout for a Christmas tree.

Our navigator was looking through the zoom lens of the optical bombsight and we both gave directions about where to fly to take a closer look at the trees we spotted. We spent about a half hour looking around until I spotted what looked like a good tree near a snow-covered county road with good access and no farmhouses around! Now we just had to land, go out and cut down the tree and haul it home on the top of my car.

We drove out to the area and finally found the right location, which was no easy task. There was light snow falling when we reached the open field. Everything looked much different from the ground than from the air. The size of that lone Christmas tree looked about right, but its location in that field was a different matter. To get to the tree we had to walk in deep snow across a windswept field that seemed to us more like an escape and evading (E&E) mission across the steppes of Russia. But we had gotten that far and were now determined to get that tree.

We headed out with ax in hand. The snow began falling heavier, but we kept on course in the “whiteout,” and finally got to the tree. It turned out to be a cedar tree. It had sure looked good at 1,000 feet and 220 knots. Up close it was one that would be the last tree to sell on Christmas Eve! It was a tough, shaggy tree that had survived years in winter winds out there in the middle of nowhere. It was a tough survivor on the western prairie, but very special to us!

Just three guys trying to cut down a tree in a blizzard.

The snow started to fall harder than ever. It came down so suddenly that it was like being hit by a small avalanche. It pressed down in a strange sensation as though it was sucking our breaths away. We cut the tree down and started back across the field. The snow started to blow like a blizzard in strong horizontal bands. We felt like we were walking across the front of a giant Langley wind tunnel. The bands of snow looked like the smoke trails in a wind tunnel.

We made it back in spite of the snow and enjoyed a wonderful, happy ending and a very merry Christmas season. We celebrated in the great German tradition of drinking hot red wine from a heated silver-lined bowl. The tradition calls for a brandy- and rum-soaked sugar cone that is set on fire and melted into a pot that has orange rings floating on top of the heated red wine. We brought the red wine back from Spain in our B-47 when we returned from nuclear alert duty.

We toasted our tree many times. We may have had the poorest looking tree, but after my wife decorated it, it looked wonderful! It was the most memorable tree of all of my Christmases. We were able to celebrate Christmas at home for a change, and it was one never to be forgotten, and no one but our wives knew where that tree came from and how we used a SAC bomber to find it!

Friday Photo: on final for Telluride

Editor’s choice: our top 10 articles from 2019
Scroll to top