Blog - Latest News
You are here: Home1 / Article Archive2 / What I Know About...3 / Ten things I know about flying in Massachusetts 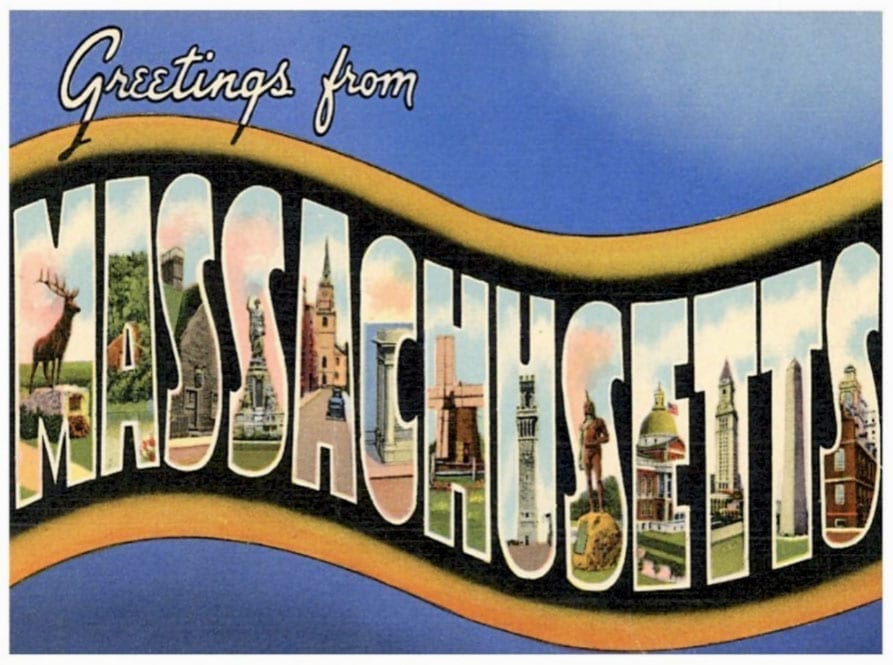 If you have an airplane, Massachusetts is a tiny little state. Depending on what you’re flying, it’ll take less than 90 minutes to fly the 164 nm between Nantucket (ACK) and North Adams (AQW) – the longest intra-state flight. That’s what it seems to take some nights driving home from downtown Boston.

It’s New England so we get our share of weather from snow to thunderstorms, but things tend to blow through quickly and the vast majority of the 60+ days I flew here last year were VMC. If I had to pick one season as my favorite, I would definitely select fall. Other than occasional frost on the wings in the early morning, conditions are generally perfect for flying. And watching the foliage change from the air is a sight to see. Here are 10 other things to do while flying in my adopted state of Massachusetts.

Starting from anywhere in the Boston area, head out over Provincetown, then down along the eastern shoreline to take in spectacular views of Cape Cod – a uniquely shaped sand bar that is visible from space and instantly recognizable on any map. You’ll see Cape Cod Bay, Nantucket, Martha’s Vineyard, and the Cape Cod Canal. Seals sunning on the beach are a common sight and you might even find a whale or two in the open water (look for the whale watching boats).

Be aware that most of Cape Cod appears on the charts with blue dots designating it as a wildlife/wilderness/National Park area so – per the FAA’s AIM – pilots are requested to fly at least 2,000 feet overhead. Along the way, stop for a meal at ACK, MVY, or Chatham (CQX). If you have more time, land at the New Bedford Airport (EWB) and head over to the New England Whaling Museum (less than 5 miles from the airport). Afterwards, catch a meal at the Moby Dick Brewing Company (located at the museum).

Katama Airpark is a throwback.

A visit to Katama Airpark (1B2) should be on every pilot’s bucket list. This airport on the eastern edge of Martha’s Vineyard is a throwback to an earlier era with three excellent turf runways, one 3,700 feet long. There is a small breakfast/lunch cafe on the field (but no fuel). One of the best parts is that the airport has a second parking area right next to the shoreline so you can taxi out, hit the beach, and then fly home. Located just outside the MVY Class D airspace, be on the lookout for scenic flights along the shoreline. There is a $10 landing fee plus $15 to park at the beach. For an unforgettable day, combine this with the Cape Cod scenic route.

While not quite the VFR Corridor next to New York City, Boston Approach will allow a scenic flight that takes you over the Charles River at 1,500 feet and affords amazing views of downtown, the Prudential Center, Fenway Park, MIT, Cambridge, and Harvard. Known to ATC as “The City Tour,” this will only be approved if Boston Logan (BOS) is landing north/south, but you’ll likely have the airspace to yourself and won’t have to keep your head on a swivel like the NYC VFR corridor.

The protocol is to contact Boston Approach (124.4) outside the Class Bravo in the vicinity of the Intersection of Rt 128 (I-95) and the Mass Pike with “Request transit Class Bravo for City Tour, Charles River to Back Bay, then return westbound.” You then follow the Charles River/Pike eastbound until you get to the Charles River basin. You might be instructed to cut things short and make a 180-degree turn at the BU or Mass Ave Bridges so it’s critical to be able to recognize landmarks. For first timers, this is best done with someone who has local knowledge.

Massachusetts lost many military facilities during the base closing exercise but still has several reserve units. Westover Airport (CEF) is home to the Westover Air Reserve Base while Barnes Airport (BAF), just eight miles to the west, hosts the Massachusetts Air National Guard.

Both Barnes and Westover are now mixed uses. Although there are no guarantees, I frequently see F-15s at Barnes when eating at SOK’S Runway Cafe, which overlooks the field. And on a recent visit to Westover, I witnessed the amazing sight of a C-5B Galaxy transport doing touch and gos on the 10,000+ foot runway.

Back in the day, some FAA planner must have been a Three Stooges fan as my home airport of Norwood (OWD) has both STOGE and CURLI intersections (I am not sure what happened to Shemp or Moe). The Cape has a Marconi VOR (LFV) named for Guglielmo Marconi and placed near the site of the first transcontinental radio communication between America and Europe in 1903. Of course, there are departures from Boston Logan that feature waypoints named for all five of our sports teams – BRUWN, CELTK, SSOXS, PATSS, and REVSS. And I just love hearing a controller with a strong Boston Accent clear someone direct to the nearby MNSTA or LBSTA waypoints.

Logan Airport packs a lot of runway into a tight spot.

I’ve flown into Logan dozen of times on Angel Flights. The controllers are very helpful and accommodating, but it’s busy airspace so you need to be on your game. Expect to be asked to keep your speed up until five miles out. If the weather allows visual approaches, they may be landing on parallel runways. Be aware that, due to the proximity of the runways, you must confirm that you see traffic landing on the parallel and acknowledge that you will maintain visual separation. The fees are quite high so best to do on a charity flight, which gets the fees waived. Like all busy airports, study the diagram to identify the Signature’s FBO location before you land and switch over to ground immediately after being instructed by the tower.

7. Shortest runway of any Class B airport

Boston has two sets of parallel runways. The 4/22 runways (R & L) are used the vast majority of the time due to the prevailing north/south winds – and even if there is a slight crosswind. But when the wind blows strong east/west, they start landing the big boys on the 10,083-foot 15R/33L. And for the rest of us, we’re assigned the 2,557 foot 15L/33R. Used strictly for visual approaches by smaller aircraft (with instructions to jog out the approach so you won’t overfly planes departing on runway 27,) the length might scare you off but since 15/33 is only used when the winds are strong you should have no trouble sticking it!

In preparing this writeup, I studied the taxi diagrams for all 37 Class B airports and the only other Class B runway shorter than 5,000 feet is Salt Lake City’s (SLC) runway 14/32 at 4,893.

The good news is that – other than Boston’s Class Bravo – there simply isn’t much! Just to the west of Boston is a tiny area that is primarily active on Saturdays for weekend activity of the Massachusetts National Guard. To the east of Boston on Cape Cod is the Otis Air National Guard base with a small area that is restricted seven days a week. Enclosed within that airspace is the Pave Paws Radar – a Cold War-era early detection system where flight below 4,500 feet is not permitted even if the area is cold. And although it is not restricted airspace, to the south of Marth’s Vineyard is the appropriately named Nomans Land, an island that was used by the US Navy from 1943 to 1996 for aerial target practice. After a cleanup in 1998, the island was turned over to the US Fish & Wildlife Department as a wildlife refuge but access to the island is still prohibited – after 43 years of bombing practice, there’s sure to be ordinance left behind, although the birds don’t seem to mind at all.

On-field restaurants come and go. In preparing this write-up, I verified that the following is accurate as of November 2019 and even found several restaurants that I did not know about so I have a few more destinations for my $100 hamburgers. (B=breakfast, L=Lunch, and D=Dinner). All are open 7 days a week except where noted.

Marlboro is gone, but not forgotten.

An oldies DJ used to say, “Gone from the charts but not from our hearts, let’s hear it for the platters that matter.” I could say the same thing about the recently closed Marlboro Airport which – until last year – was the oldest continually operated airport in Massachusetts (opening one year before Boston Logan). When I evaluated where to begin my pilot training in 1988, the two closest options were the super-busy Hanscom Field in Bedford (BED) or little ole’ Marlboro. And I do mean little as the uncontrolled field had a single runway just 1,659 feet long. Not only that, but one runway had the proverbial 80-foot tree off the end while the other had a 4-foot chain link fence next to a busy road (look out for the passing box truck). What my training lacked in radio communications, it more than compensated with short field technique, as every flight required you to nail either the climbout or the approach in order to miss that tree (there were actually two large trees and you aimed for the V in between).

I eventually got my private pilot license flying out of Marlboro but soon went into a partnership at another airport and only came back once, many years later, to prove that I still had “what it takes” to get into a 1,659-foot field. But over the years, fewer and fewer people followed my path to Marlboro for flying lessons and once the flight school closed the die was cast. Like the family ski area, the economics no longer seems to work for sleepy little airports but while Marlboro will soon be marked with an X on the charts, it will always have a place in my heart.

This is another entry in our “What I know about flying in…” series. If you’d like to write about your home state or country, email us: [email protected] Charlie Tillett
Charlie Tillett gave himself the birthday present of an introductory flying lesson in 1988, bought his first airplane in 1992 and has owned at least one airplane ever since. During that time, he has flown 2,500 hours and completed 150+ Angel Flights. He and his wife live outside Boston and are currently using their Piper Meridian to travel around the country on a quest to play golf in all 50 states (OK, commercial to Hawaii).

Escape from the jaws of IMC
Scroll to top