Blog - Latest News
You are here: Home1 / Article Archive2 / My Adventure3 / VFR to Russia? No problem! 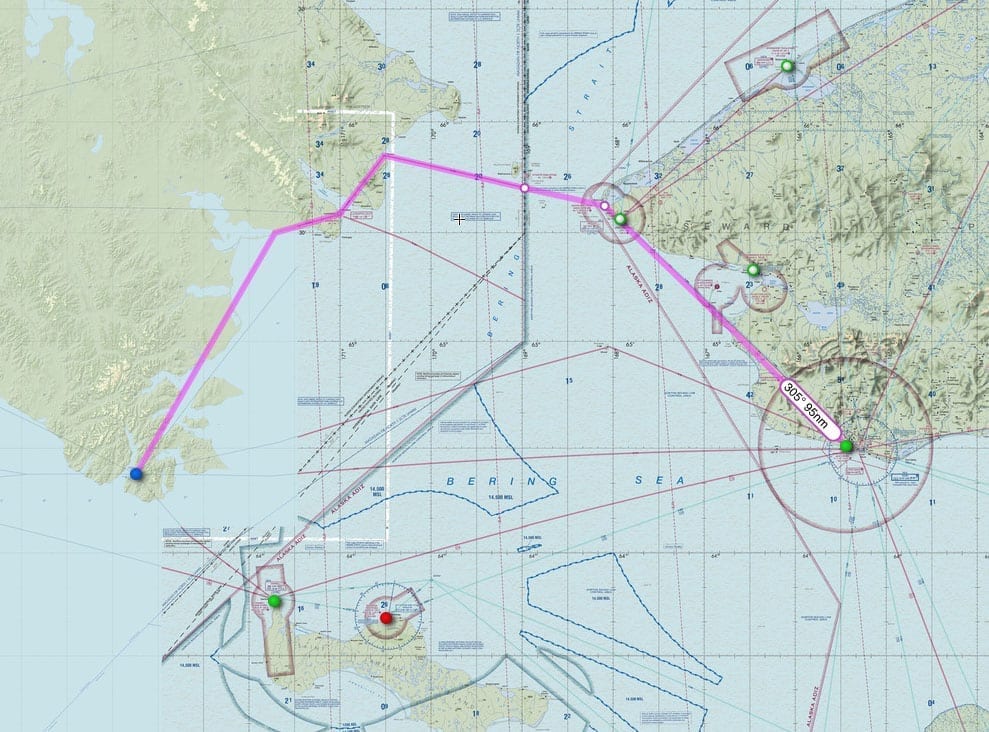 This past July, we joined the Alaska Airmen Association and Circumpolar Expeditions on a group flight from Nome, Alaska (PAOM), to Provideniya, Russia (UHMD). The trip served two purposes: one as a goodwill mission to the Chukotka region of Russia and the other to keep the route between Nome and Provideniya open. Originally scheduled for June 23rd, the weather delayed us two weeks. Out of the seven aircraft originally scheduled, we were whittled down to just two, which included our Cirrus SR22 and a Cessna 182. Between the planes there were a total of six travelers.

The route, known as the Nome-Provideniya Air Route, generally follows the Alaska coastline northwest from Nome over Tin City and then Wales. From Wales, it turns west across the Bering Strait direct to BATNI intersection, located on the Russian FIR, and between the Diomede Islands. At BATNI the route joins B369 towards the Siberian coast, then turns southwest following along the Siberian coastline and passing over the communities of Lavrentiya and Lorino, then on to Provideniya.

Not a direct route, but one that is mostly over land.

Nearly 20 years ago, the Alaska Airmen Association, the FAA and Russian aviation officials collaborated to create a published VFR route, designated Bravo-369, from Alaska to Russia. In 2001, Alaska Airmen’s members Felix Maguire and Terry Smith led a large group on the inaugural B-369 route between Nome and Provideniya. Other successful and unsuccessful attempts have been launched since then; in truth, very few aviators have flown the route. Along the way, excessive Russian user fees led the Alaska Airmen Association to successfully lobby for reduced ATC fees. They also secured the ability to make the B369 flights without the normally required Russian Navigator/Translator onboard each plane. The Russian government now generously ensures there will be an English-speaking controller in Provideniya tower when the route is being flown.

The one-way distance is approximately 275 nm, with the longest overwater leg being 62 miles. The day we flew, the coast of Siberia was clearly visible before we reached Tin City, Alaska. B369 can be filed both IFR and VFR using an ICAO VFR flight plan form.

Upon entering Russian airspace at BATNI, the flight is conducted in accordance with Russian AIP procedures. The AIP states that altitudes are given in meters but we were assigned flight levels. Standard altimeters are set at 7,000 ft., so if cruising at 10,000 ft. the terminology would be “flight level 100.” Wind speed is provided in meters per second. Altimeters are given in QNH. Russian controllers in that area are difficult to understand as the radio signals are weak and their English is heavily accented. However, we had no problems dealing with them.

The International Date Line is crossed at BATNI intersection. This makes for an interesting time zone adjustment as Provideniya is 20 hours ahead of Nome. We left Nome on Sunday at 14:06 pm, flew for 1.7 hours and arrived Provideniya on Monday at 11:48 am.

The date line and the US-Russia border lie between the two Diomede Islands. Little Diomede is on the US side and Big Diomede is on the Russia side. Because the date line separates them, they are sometimes referred to as Tomorrow Island (Big Diomede) and Yesterday Island (Little Diomede). During the Cold War, the line was also known as the Ice Wall. In 1987, US swimmer Lynne Cox swam from Little Diomede to Big Diomede, a distance of approximately 2.4 miles, becoming the first person to swim from the US to Russia. She was congratulated by both Mikhail Gorbachev and Ronald Reagan. An interesting trivia question is, “How far is it between the US and Russia?” Answer: 2.4 miles.

Several permits are required and it takes a minimum of 75 days lead time to complete the process. The permits and documents are as follows:

Both aircraft filed round trip VFR flight plans and eAPIS. We cleared US Customs outbound by meeting directly with the US Customs prior to departure from Nome, submitting General Declarations. The meeting also served as our advance notice for the return trip.

Provideniya Airport isn’t much to look at, but the runway is long.

Ten minutes prior to BATNI, as required by procedure, we contacted Anadyr Control and were given permission to enter Russian airspace. Position reports were required at BATNI, LA and MOUND. MOUND is not on B369 but is a waypoint identifying Provideniya tower’s airspace. After BATNI, none of the Russian intersections were in the Garmin database so user-defined waypoints were created.

Runway 01-19 at UHMD is substantial at 6,562 ft. long and 171 ft. wide. ForeFlight shows the surface as grass, but, in fact, it is gravel. Much discussion took place about how the Cirrus should handle this. Wheel pants off, wheel pants on? The issue with removing the wheel pants is that it leaves the horizontal stabilizer exposed to gravel being kicked up by the main wheels.

I discussed this issue with Jim Barker at Aviation Resources and he came up with a clever gravel mod that basically amounts to fiber broom bushes attached to the back of the wheel pants. During this trip, we operated off of two gravel runways in Alaska (6R7 and PAIG) and UHMD and had no problem at all with the gravel and our wheel pants. Soft field takeoff technique was used on all gravel runway takeoffs.

We were met by seven Russian customs, immigration and border crossing officers. Although they did their jobs thoroughly, they were helpful, pleasant, and curious about our planes – which they rarely see. Fortunately, one of the officers spoke some English and was very helpful.

We spent three days and two nights in Provideniya, which is not a destination for the trepid traveler. By the way the crows flies, it’s only 151 miles from Nome to Provideniya but it feels like a million miles away. There is no avgas. The streets are not paved, there are no hotels, restaurants, or bars and very limited internet service. There is no hot water anywhere in the city. Locals visit a public banya, a sort of sauna, where they steam you like a lobster until it’s so hot that the cold water feels good. The cold water isn’t just cold – it is iceberg cold. There are several grocery stores that have a reasonable selection of goods including vodka, wine and pretty good Russian beer. We stayed in a small trade school that has student housing available during the summer months. Our hosts organized catering for the six of us. Restrooms do not have toilet paper. Almost no one speaks English. It is absolutely necessary to have a guide with you.

It’s only 150 miles from the US, but Provideniya feels like it’s a million miles away.

We toured the surrounding area, including crumbling former Soviet-era military installations and Siberian gulags dating back to the 1940s. There is a very interesting local museum. We visited parts of the Beringia National Park and the indigenous peoples of Siberia community of New Chapalino. We also visited two schools, and through an interpreter, spoke to the children about small planes and general aviation. We found the people of Chukotka to be very friendly and accommodating, even to the point of inviting us into their homes for cake and refreshments. The children were fascinated with airplanes, which they rarely see. Almost all of them expressed interest in learning to fly.

The weather in this part of the world can change quickly and forecasts are amended often. Monitoring the weather was a challenge without internet or phone service. One of the many challenges of Provideniya is the lack of internet service to check the returning weather. Fortunately we were hosted by the very capable and English-speaking staff of the Beringia National Park, located within Chukotka. They graciously allowed us access to their office and internet.

One of the best parts of the trip was our flight from our base in Apalachicola, Florida, to Nome, Alaska, a distance of 3,683 nm. We chose to fly the inland route through Canada and Alaska. This not only provides for a scenic and weather-friendly route but also for the opportunity to visit some of the historic airports along the Alaska Highway that were part of the Northwest Staging Route.

Established in 1941 as part of the US Russia Lend Lease Program, the Northwest Staging Route was a series of airstrips and radio range stations built in Alberta, British Columbia, the Yukon, and Alaska prior to the US entering World War II. It then extended into Russia as the Alaska-Siberian Route, beginning in Great Falls, Montana, and ending at various Russian airbases located near the western front during World War II. The Alaska-Siberia Air Route was used to covertly ferry 7,983 aircraft. They were ferried year round with little in the way of navaids or weather services. Incredibly, only 177 aircraft were lost.

Fort Nelson was one of the stops on the Northwest Staging Route.

Generally, the Women Airforce Service Pilots (WASP) would the ferry the aircraft from locations in New York, Kansas, California, and Minnesota to Great Falls, Montana. From there, the 7th Ferrying Group would fly the aircraft to Ladd Army Airfield near Fairbanks, Alaska. At Ladd Army Airfield, the aircraft were turned over to the Russian crews, who would then fly them to airbases near the Russian western front, a distance of over 6,000 miles. The total distance over which combat planes were ferried from the manufacturing sites to the warfronts in Europe was even greater, 8,000 to 10,000 miles across 12 time zones. The confluence of US and Russian airmen, mechanics and supporting alcohol made for legendary tales in Fairbanks.

The aircraft included Douglas A-20s and C-47s, North American B-25s, AT-6F Texans, Curtiss C-46s, and P-40s, but the majority (5,015) were Bell P-39 Airacobras and P-63 Kingcobras. The Airacobras and Kingcobras were not used much by US forces due to their limited altitude capabilities, which prevented them from escorting high altitude bombers. For the Russians they were perfect, as most of their fighting was below 15,000 ft. Several Russian aces, including the legendary Aleksandr Pokryshkin and Grigory Rechkalov, the second highest scoring Allied ace of World War II, flew Cobras. The Russians referred to them as “Cobrushka” (little cobra).

Today, you can fly the same historic route, even all the way to Siberia, and land at many of the airports used by both the US and Russian crews. Museums and memorabilia are found along the way, including the newly opened Lend Lease Museum in Fairbanks. The original terminal building at Watson Lake, Yukon, still stands and has an interesting collection of period photos.

For further reading regarding the Alaska-Siberia Air Route and the US-Russia Lend-Lease Program, Alexander B. Dolitsky’s excellent book Pipeline to Russia is full of interesting information, history, facts and first-hand accounts of this massive undertaking.