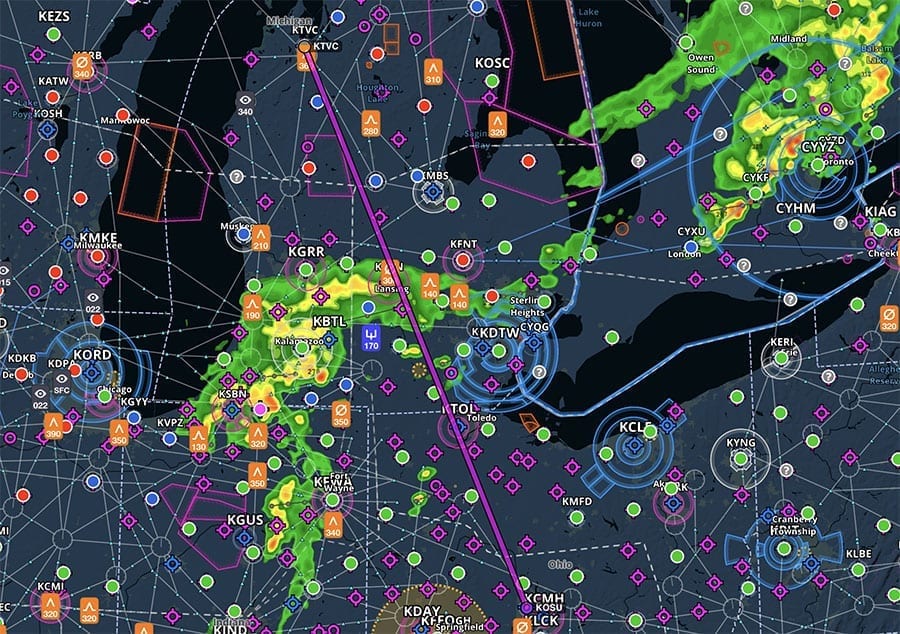 Summer is coming to an end, which means your annual family vacation to northern Michigan is coming to an end as well. Today is go-home day – if the weather cooperates – so it’s time to look at ForeFlight. The goal is to get from Traverse City, Michigan (TVC), to your home in Columbus, Ohio (OSU). It’s about a two and a half hour flight in your flying club’s Cessna 172, which is well-equipped with an Garmin GTN 650, ADS-B weather, and an autopilot. You are an experienced pilot, having made this trip multiple times before, but you’re strictly VFR.

Read the weather report below and decide what you would do.

At first glance, it doesn’t look like a great day for a VFR flight. There is rain right across your route, and a few red and blue circles indicating less-than-great VFR.

The surface analysis shows a cold front is moving in from the west, which is bringing that line of rain.

The prog charts for the next 24 hours show the front moving through Michigan and Ohio, bringing scattered rain and storms with it.

By tonight, northern Ohio will see most of the rain:

Even overnight the front remains in place, although the low moves off into Ontario:

Taking a closer look at the radar, you see a lot of green and a fair amount of yellow across southern Michigan.

Comparing base and composite reflectivity shows that some of that rain is aloft and not hitting the surface, but it’s definitely raining in many areas along your route. Here’s composite on the left and base on the right:

The visible satellite shows more detail, with lower clouds near your departure, thick clouds along the line of rain, and clear skies over Ohio.

Since you’re limited to VFR, the METARs and TAFs are what really matter today. At your departure airport conditions are marginal VFR but with good visibility and no rain. The ceiling is forecast to improve, but slowly.

The beginning of your route continues the marginal VFR conditions, with generally good visibility but ceilings around 2000 feet.

A big focus is the area around the rain showers. Surprisingly, most of the airports in that part of the state are reporting VFR conditions, with only FPK showing restricted visibility due to rain:

Even Lansing, which is under a yellow section of rain, is reporting pretty good VFR:

Past the rain, conditions are excellent in Ohio.

And your destination is severe clear, with a forecast to stay that way:

It’s time to decide if you’re flying today or spending another night in Michigan. While the airplane is due back today for another flight, you’re smart enough to know that doesn’t matter – safety first. You could take off and stay low for the first 100 miles, but beat any convective build-ups across the Ohio border. This looks doable and the weather around the line of rain is pretty good. But that could be a sucker hole too, and the ceilings might drop quickly as rain builds throughout the day.

Add comment below and tell us if you would go or no go – and why.

Pilots make a deal with the devil
Scroll to top