Blog - Latest News
You are here: Home1 / Article Archive2 / What I Know About...3 / Nine things I know about flying in Ohio 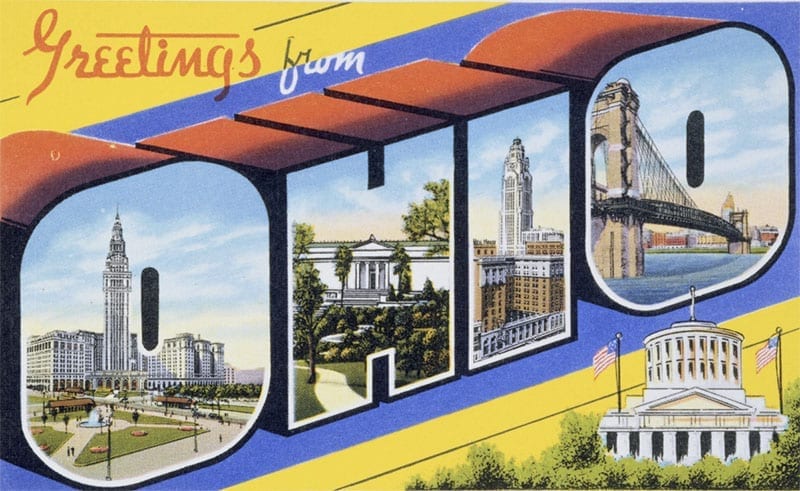 This is the second in our series celebrating the unique characteristics of American states and other countries – at least as seen by pilots. Mac McClellan started us off in Michigan, and more state profiles are coming soon (Illinois is spoken for already). If you want to write about your home state, drop us a line: [email protected].

1. It’s the birthplace of aviation.

Let’s get this out of the way early on. Sure, North Carolina may have been the location for the Wright brothers’ first flight, but as any Ohioan can tell you, aviation was really born in Ohio. The Wright Brothers lived in Ohio, they designed their first airplanes in their Ohio bicycle shop here, and Huffman Prairie was the first real airport.

The birthplace of aviation – don’t argue with us.

That history is alive today, as a visit to the 17 sites on the Aviation Trail around Dayton makes clear. You can visit the Wright Cycle Company building, Orville’s Hawthorn Hill estate, and see the original 1905 Wright Flyer III (the first “real” airplane, according to most experts). Another fascinating stop is the National Museum of the United States Air Force at nearby Wright Field, one of the finest aviation museums anywhere in the world. From the Memphis Belle to a B-2 bomber to a retired Air Force One, this 19-acre facility is on par with the Air & Space Museum in Washington, and a must-see for any true aviation enthusiast.

2. There’s an airport in almost every county.

Ohio is fortunate to have 151 public-use airports, heliports, and seaplane landing areas – 3% of America’s airports in a state with only 1% of its square miles. In fact, a program in the 1960s led by Governor Jim Rhodes sought to put an airport in every county in the state (all 88 of them), as a means of supporting rural economic development. Rhodes didn’t quite hit that goal, but he came awfully close; all but a handful of counties have an airport and many have two or even three. That’s not to mention the dozens of private airports across the state, from short farm strips to paved and lighted runways.

The result is a smorgasbord of airports and a great state to fly across low and slow. You’re never far away from a fuel stop or an interesting lunch break. Each one has its own history and personality.

A lot of jokes about Ohio and other “fly-over country” locations mention how the terrain is as flat as a pancake – nothing but corn fields as far as the eye can see. That may be true in some parts of central Ohio, but in southern and eastern Ohio there are some major hills to consider. These may not be tall enough to merit the word “mountains,” but the foothills of the Appalachians are enough to impact a flight in a light airplane. Fly near Portsmouth or Gallipolis and you’ll see thick valley fog most mornings and tricky winds in the afternoons. And if you’re flying over the eastern half of the state, get ready for some thick and surprisingly remote forests, with limited options for forced landings.

4. Lake effect snow and ice is for real.

Cleveland has a great lakefront airport, but it also has some nasty weather in winter.

Pilots in the southern half of the state may worry about valley fog along the Ohio River, but that’s nothing compared to the lake effect weather experienced by pilots in Cleveland and Akron. The snowstorms in winter can be intense, dumping feet of snow and shutting down airports for days. And if you’re looking for in-flight icing (who is?), northeastern Ohio is the place to go. The relatively warm water of Lake Erie is a great ice factory in the winter; so good that NASA has based their icing research airplanes in Cleveland for decades.

Most pilots know about the huge freight operations at Louisville, Kentucky (home of UPS), and Memphis, Tennessee (home of FedEx), but did you know that CVG is quickly catching up? While the airport may technically be in Kentucky, you’ll see a lot of heavy iron flying around southwest Ohio when the sun goes down.

The central US location and the four long runways make CVG an attractive location for cargo operations, and DHL has built one of three global “Super Hubs” at the airport. More recently, Amazon has broken ground on a $1.5 billion air cargo hub on the south side of the airport. You’re as likely to see an airplane with DHL’s vibrant yellow paint scheme or Amazon’s Prime Air logo as you are to see one with Delta’s logo.

6. We have our own version of Meigs.

Chicago’s famous lakefront airport may be gone, but Ohio pilots can enjoy a similar view at Burke Lakefront Airport in Cleveland. This convenient airport was the first downtown airport in America, and opened with a 2,000-foot dirt strip. Now it has parallel paved runways that offer convenient access to downtown Cleveland, including the Rock and Roll Hall of Fame and the Cleveland Browns stadium.

There are also some memorable island airports just northwest of Cleveland that offer a taste of general aviation travel at its finest. Put in Bay, on South Bass Island, has a well-maintained 2900 ft. strip that’s a short bike ride (don’t look for many cars) from the island’s famous nightlife – just remember to miss the 400 ft. monument on short final. Kelleys Island’s runway is a little shorter at 2200 ft., but the island has a more laid back and relaxing atmosphere that’s worth visiting in summer.

7. Lots and lots of grass strips.

Ohio has dozens of grass strips, including Waco Field just north of Dayton.

If you like flying vintage aircraft and taildraggers, there are a lot of grass runways to enjoy in Ohio. Many are private, maintained by farmers with a love of aviation, but quite a few are open to the public. Waco Field in Troy (which pays homage to the famous biplane company), Grimes Field in Urbana (home of the Grimes Lightning Company), Hook Field in Middletown (with a spacious 3000 x 160 ft. grass runway) are just a few of the public-use airports with golf-course level runways. There are dozens more, and quite a few have museums or vibrant pilot communities.

8. There is no such thing as Dayton Approach.

Sure, the chart shows magenta rings around Dayton’s international airport, but the note says “Contact Columbus Approach on 118.85.” What gives? In 2011, the FAA combined Dayton TRACON and Columbus TRACON (60 miles to the east) as a way to increase efficiency and reduce costs. Older pilots may still say “Dayton Approach” on the radio, but rest assured you are talking to a controller in the state capital. Not very respectful for the birthplace of aviation.

9. You really can get a free lunch every Saturday at Sporty’s.

For well over 25 years, Sporty’s Pilot Shop has hosted a hot dog cookout at its headquarters on the Clermont County/Sporty’s Airport (I69), just east of Cincinnati. Every Saturday from noon to 2pm, rain or shine, pilots gather to trade stories, buy cheap avgas and shop in the famous Sporty’s store. It’s a fine combination of Midwestern hospitality and aviation fun.

A biplane engine failure, and the start of a new business