Blog - Latest News
You are here: Home1 / Article Archive2 / John's blog3 / The unspoken words between fathers and sons in the cockpit 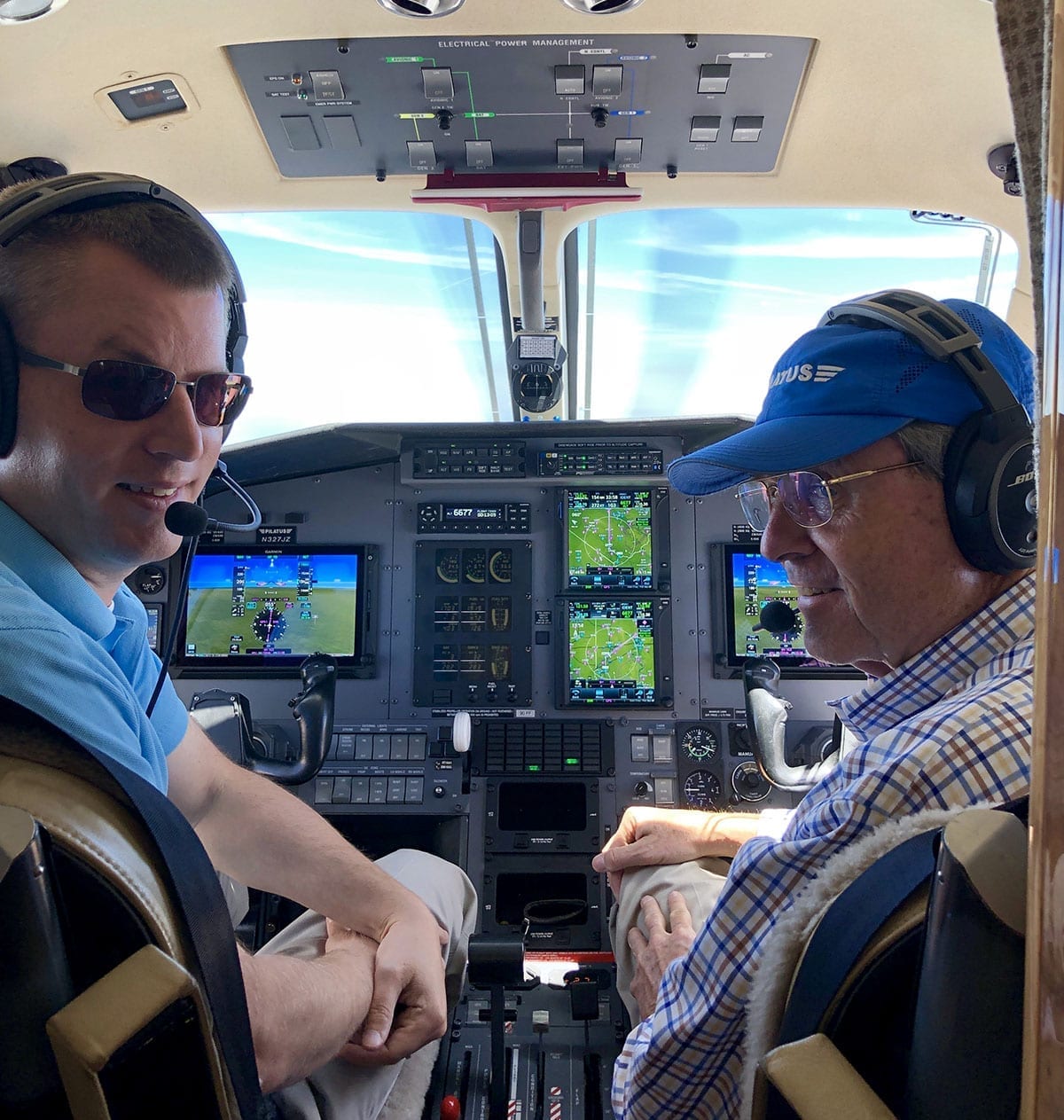 Men are terrible at communication, at least according to conventional wisdom. They repress their feelings and avoid honest conversations, putting on a brave face out of some sense of masculine obligation. This is especially true when fathers and sons are involved (just read Shakespeare if you need some examples – wow).

My family life is not nearly that dramatic, thankfully. My father has a reputation for being demanding and serious – in his business career he had to battle some tough people – but I know better. He’s actually funny, spontaneous, and warm. I like to think I am too (well, maybe the funny part at least).

And yet we both exhibit some of those typical male traits: short conversations, a focus on the practical parts of life, and a preference for efficiency over emotion. That means flying, something we both love to do, is much more than just a weekend hobby. It’s our version of playing catch in the back yard, a shared experience laden with meaning. When my dad says, “let’s go flying,” what I really hear is, “I love you.”

Of course we do talk when we fly. In the cockpit, there’s a steady dialogue as we run checklists, review the weather, and try our best to fly like an airline crew. When we’re not busy, we joke and tell stories about memorable flights. But I’ve realized the most important words between father and son are often unspoken.

This realization hit me quite powerfully on a flight together in a Pilatus PC-12 a few years ago. On this day the weather was interesting: a 500 ft. overcast and 1 mile of visibility with moderate rain. As the SiriusXM radar picture loaded, I pointed to the colorful screen and joked, “Looks like we get a free airplane wash today.”

In my head the conversation was a little different: This is gonna be intense. Hope our passengers are buckled in. I know what we’re about to do is safe – just another day at the office really – but there’s still something about the moment before takeoff into serious weather that gets my heart rate up.

My grip loosens just a bit. Now I know we’ve got this. I read the same weather forecast and reached the same conclusion, but when both pilots are in sync everything seems a little easier. He trusts me completely and I trust him completely; that feels awfully good.

It was my leg to fly left seat, so I was pilot in command. At the hold short line I was all business – nobody goes through life like a Hallmark movie and we had work to do. “Takeoff checklist.”

This sure is more fun with him in the right seat. It’s also safer and easier. We may be father and son, but we’re also a well-oiled machine in this airplane. Is Delta hiring?

After takeoff, ATC wanted us to turn right, intercept a radial, and climb to 10,000 feet. There were some stronger radar returns to the right, so before the controller was even done talking my dad was looking at me with a raised eyebrow. I shook my head twice. No words were spoken but the conversation was crystal clear: unable.

He may have 35 years and 10,000 hours on me, but right now I’m the PIC and he was nice enough to look my way before responding. I guess that’s respect. But then of course he would defer to me in the left seat – he taught me that bit of flight crew etiquette in the first place!

Our minds seemed to be operating as one, so his reply was just what I expected: “We need to maintain current heading for weather.”

My dad’s hands fly all over the panel – a new altitude in the preselect, a new active leg in the Garmin, a slight tilt down on the radar to check on that cell. Who said anything about old dogs and new tricks? This septuagenarian is on top of things. Now the respect is going in the other direction.

Sure enough, we broke out on top about 10,000 feet and left the drizzle below. After the checklist was complete and the power setting was fine-tuned, we settled in for a smooth flight. That doesn’t mean we were bored; he peppered me with questions about his iPad apps while we cruised along at FL230. “How do I update a flight plan after it has already been filed? Is Garmin Pilot showing base or composite reflectivity on the radar? Can I send a flight plan to the panel or only retrieve it from the panel?”

When he teaches you how to land taildraggers, how can you not return the favor with some iPad instruction?

The student has become the master. After decades of soaking up his experience, learning how to land a taildragger and how to hot start a Continental engine, I’m returning the favor. I love his thirst for knowledge – after 50 years of flying, he’s still fascinated by aviation and humble enough to admit what he doesn’t know. I hope I can say that about myself in another 25 years.

After an hour, we started our descent. There were crossing restrictions to comply with, ATIS broadcasts to copy, and an arrival briefing to conduct. The relaxed conversation stopped and we were all business again. We don’t have a formal sterile cockpit rule, but we seem to observe one almost automatically. There’s no place for family dynamics on an RNAV arrival.

After a routine approach and a respectable landing in some fairly enthusiastic winds, my co-pilot offered his grade of the performance – never asked for but always desired: “Well done.”

A 10,000-word review in Flying magazine couldn’t mean more. We safely completed a challenging flight and did it as a team. On top of that, my aviation hero just told me I made a nice landing. I’ve made it – the pinnacle!

My reply was typically unemotional – “We’ll take it; after landing checklist please” – but I’m pretty sure the big smile betrayed my nonchalance.

Every son wants his father to respect him, especially when he grows up. Every father wants something too: to feel like he has made a difference. When you’re flying together, both of those seem to come naturally. After all, you’re together in a confined area, doing something that takes complete focus, with serious consequences if you do it wrong. That inevitably builds trust and stirs paternal pride.

Happy Father’s Day to all the flying dads out there, but especially to the intergenerational flight crews who say so much to each other simply by sharing the sky.

The day my dad taught me the lesson of a lifetime

Friday Photo: dreaming of flights to come
Scroll to top