Blog - Latest News
You are here: Home1 / Article Archive2 / I was there3 / The water is up close and personal in a Lake Amphibian 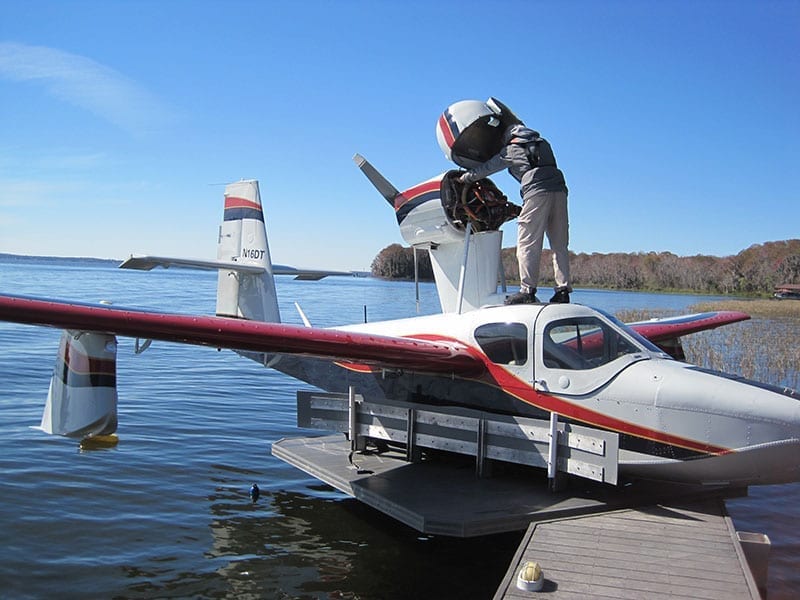 My friend Dave Taisch had offered to take me up in his Lake amphibian some months ago, but we were never able to mesh our schedules until January 25, 2019.

Dave is a very cautious and thoughtful pilot and that is why he was the recipient of the Wright Brothers Master Pilot Award given by the Federal Aviation Administration for 50 years of safe flying. I felt I was in good hands.

Step one, as always, is the preflight. It’s a lot easier with this rotating dock.

He and I are both members of the Experimental Aircraft Association chapter 534 based at the Leesburg International Airport in Leesburg, Florida. Leesburg is located in Lake County and, as the name might indicate, there are a few lakes around. In fact, there are 2000 lakes in the county and 1400 of them are big enough to actually have names.

Tavares, Florida, the town next to Leesburg where Dave and I live, is actually called “America’s Seaplane City.” Tavares is also the home of the Progressive Aerodyne’s SeaRay light sport amphibian. All of this makes this area a great place to enjoy seaplane flying. You always have a place to land in view when you are flying a seaplane in Lake County.

Only in a small single-engine amphibian of this type can you get up close and personal with the water.

My experience began when I saw his unusual private dock. Dave’s plane sits in a sort of a cradle on top of a platform a half step off the end of his dock.

This platform has a round table in the middle that can swivel 360 degrees, with the use of hydraulics and electric power. The plane sitting in its cradle can be turned easily on the table so Dave can pre-flight it without falling in the water or getting his feet wet.

When everything was checked out and we were ready to fly, we got aboard. Dave started the engine and his wife Ruth, who is also a pilot, operated some controls on the dock to lower the platform with the airplane into the gentle rippling waters of Lake Harris in Tavares, under blue skies and a gentle breeze from the north. Dave mentioned that this can be done either with the controls on the dock or by radio control from the plane. Pretty neat!

As we coasted along on the water with the engine slowly ticking over, he said, “Open your door and feel the water.” I unlocked the right-hand door, pushed it up to its open position, and stuck my hand down the side of the airplane into the cool water of Lake Harris about 18 inches below.

The cockpit is well-equipped for a seaplane.

What makes this amphibian different from some of the single-engine float planes I have flown in, is how close to the water you are. If I had brought a fishing pole it would have been very easy drop a line in the water.

Normally when you want to do a runup of the engine, you have a space next to the runway where you can safely set the plane’s brakes and run up the engine to check the mags and make sure the engine is performing as it should. However, when your plane is on the water, you have plenty of space for the runup but no brakes to set.

At this point, Dave said to me over the intercom, “Pull the yoke all the way back and hold it there while I do the runup.” As he increased the RPMs, we became a speed boat racing across the large lake with spray hitting the wind screen. After about a minute of this with the runup complete, we slowed down to an idle and the plane’s aluminum haul settled back in the water.

After checking the direction of the wind and location of several fishing boats, he opened the throttle of the Lycoming 200 hp IO-360 engine, which sits on top of the fuselage right behind the cabin of his Lake Amphibian, and we were soon on plane, skimming the surface of the water and then quickly in the air.

Dave is not a Certified Flight Instructor, but he explained everything he was doing as we prepared for the flight, always asked if I had any questions and once in the air gave me the opportunity to get the feel of flying the plane myself.

We did two splash and dashes on little Lake Harris, climbed up to 1500 feet and flew north to the Ocklawaha River where we did two more. We visited the new seaplane ramp at Leesburg International Airport in Leesburg, then bored many large holes in the sky over Lake County.

As we returned to Dave’s lakeside home on Lake Harris, we flew low over the new bridge being built across the Lake Harris, made a slight turn to the right around the island and gently kissed the surface of water then settled smoothly. A perfect landing with Dave’s dock in sight on the shore.

The landing options in Florida are almost endless for a seaplane.

Seaplanes do not have the benefit of brakes like their land-based counterparts so you have to be situationally aware of the wind, boats and other obstructions on the water. As I mentioned, this plane has no brakes but what it does have is an after-market reversible prop.

As we slowly approached the now-submerged cradle at the end of Dave’s dock, if we appeared to be going a little fast, he reached up and pushed the magic black button, reversed the pitch of the prop, and he could almost stop the plane’s forward movement on a dime.

Once the plane was floating in its cradle again, Ruth, who had been advised of our arrival by radio, manipulated the controls and lifted the docking platform and plane out of the water.

This was a fun and educational experience for me and I much appreciated Dave’s offer to see what it was like to fly in his Lake Amphibian and get up close and personal with the waters of Lake Harris. 5 good things about general aviation in 2019