Blog - Latest News
You are here: Home1 / Article Archive2 / History3 / Everyone wanted to be the first to fly across the pond 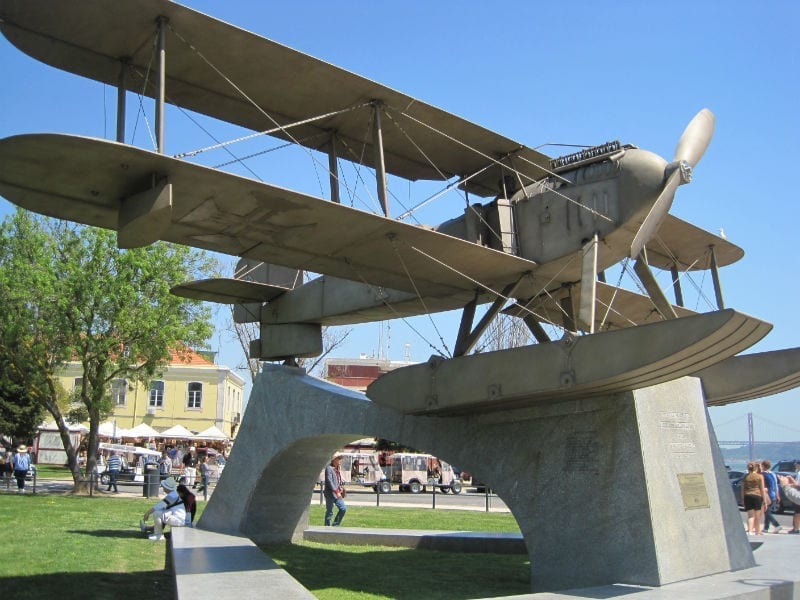 Back in the late 1900s and into the early 1920s, when aviation was blossoming in the United States, it was also doing the same in other countries around the globe.

In this country we tend to focus on the Lindbergh flight in 1927, but there were other attempts by people from England, France and Portugal, just to name a few.

A bronzed replica of the Fairey III-D MkII commemorates the 1922 flight.

While my wife Joan and I were recently traveling in Europe we came across a surprise to us in Portugal that commemorated a flight across the South Atlantic from Lisbon to Rio de Janeiro, Brazil, in 1922. This was accomplished five years before Lindbergh.

This journey was made by two Portuguese Naval aviators in a single-engine float plane called Fairey III-D Mk II. This airplane was built by the English and purchased by the Portuguese Navy.

The tour director was explaining all about the flight while we were on a tour of Lisbon, but because of her accent and other noise, it was difficult to understand the story. At this point we were astounded that this could have happened so long before the Lindbergh flight.

After a while the tour stopped at the Lisbon Marine Museum and I was able to get the rest of the story.

Two Portuguese pilots took off on March 30, 1922, from Lisbon Harbor in a single-engine Fairey biplane equipped with very large floats and landed in Rio de Janeiro on June 17, 1922.  The two pilots were Gago Countinho and Sacadura Cabral.

They flew in nine stages, with three different Fairey float planes, a journey of 79 days but an actual flight time of 62 hours and 26 minutes. They flew 8,383 nautical miles in these single-engine, open cockpit biplanes.

The actual Fairey III-D Mk II, named” Santa Cruz” that landed in Rio in 1922 on display in the Lisbon Naval Museum.

One of the things that helped make this flight successful was the use of a new type of sextant with two leveling bubbles which could produce an artificial horizon, developed by these two men. This enabled them to take constant fixes for position and their course was pretty much a straight line. They were able to find stops in the Canary Islands, the Azores, and islands off the coast of Brazil where Portuguese Naval vessels were waiting with fuel and repair parts.

Unfortunately, they had to ditch the first two planes in those Brazilian islands due to engine trouble and a broken float. After losing the second plane, they were rescued by a passing freighter and taken to a nearby island. Eventually, a Portuguese Naval vessel showed up with their third Fairey aircraft and they were able to continue the trip to Rio.

This was quite a flight at a time when the aircraft industry worldwide was just getting started and airplanes were not as dependable as they are today. These men were very brave, skilled navigators, and persistent.

Today there is a bronzed, full-sized statue of a Fairey III biplane with floats in a Lisbon park to commemorate the flight. Located in the Marine Museum is the third airplane, called the Santa Cruz, that actually landed in Rio de Janeiro, Brazil on June 17, 1922. Read about more details here.