Blog - Latest News
You are here: Home1 / Article Archive2 / I was there3 / A fly-in movie night in the mountains of Australia 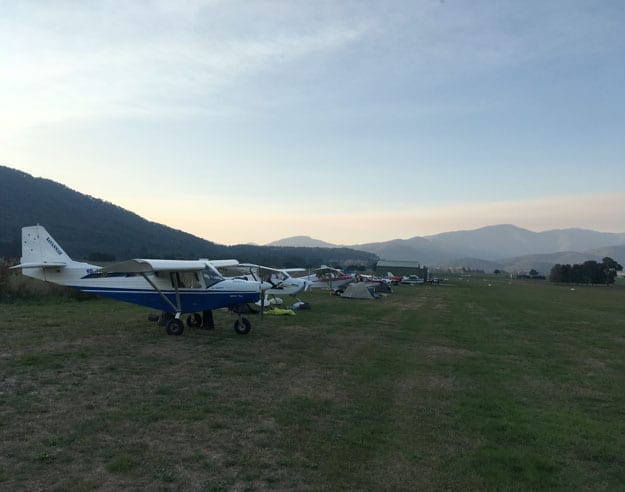 A while back at one of the BBQs at our airfield, I managed to get myself volunteered to be the “Flyaways Coordinator” for our group of pilots. We fly from Penfield, which is a grass airfield a few miles west of Melbourne airport in Victoria, Australia. I thus keep an eye on flying events advertised in magazines or on websites. So I was particularly interested to see an event titled “Porepunkah Movie Night” advertised in a magazine.

The airport at Porepunkah is in a scenic location.

Porepunkah is a beautiful location in the Victorian Alps, and I remembered flying in there once before. It is a grass airstrip of about 770 metres, surrounded by mountains, and on my first attempt at landing, with my Garmin warning me “terrain ahead, terrain ahead,” I came in a bit high, and decided to go around. My second attempt was rather better, and I landed and parked next to the hangars.

I was struck by the lovely location, but did not really have time to linger. So I was keen to find out more about this event and emailed the contact person listed. Basically the idea was for people to fly in and either camp under wing, or in a hangar, and watch two or three aviation-themed movies while enjoying dinner and a few drinks. Now that’s my kind of event! So I emailed the details to my contact list and waited for the date to arrive.

The Saturday dawned rather misty, as autumn mornings in Victoria frequently do, but by the time I arrived at Penfield, and refuelled my Savannah, it had cleared up to a sunny, cloudless day. The Victorian Alps are renowned for different weather to the north and south, and Kilmore Gap is well known to locals as a location where we can fly south to north, or vice versa, between the peaks, but under the Air Traffic Control steps for Melbourne airport. The Kilmore AWIS frequently tells us “cloud on ground,” but the recent provision of weather cams allows us to see in real time on a tablet PC the weather at all four cardinal points from this location. A technology innovation of which I thoroughly approve.

So I set off through Kilmore Gap towards Mangalore, and picked up the Hume Freeway, which skirts the Alps to the north, heading to Violet Town where I would turn eastwards towards Myrtleford, and then southeast down the valley to Porepunkah.

This route follows flatter terrain and valleys, avoiding flying over some “tiger country.” My hangar mate and fellow Savannah pilot, Matt, had opted to fly a more direct route over Mansfield, as he would be leaving later in the day. Unfortunately, we were the only two of our group free to attend the event.

At 3500 feet it was still hazy, and although visibility was fine I never really had a clear horizon. As I turned towards Myrtleford and the mountains, I could see some controlled (I assumed!) burn-offs in the valleys, and the smoke haze was very noticeable. At this time of year in Australia, the fire services will take the opportunity of burning off areas of forest that may pose a forest fire risk at the drier times of year. However, it was not a problem and I landed at Porepunkah at about 1pm.

Flying in means camping out.

There were already some other early arrivals, and as I taxied up to the end of the line of aircraft I noticed a Cessna 172, an RV-4, an MCR, a familiar-looking Rans S-19, and a Zodiac 601, amongst others. After getting out and wandering down this line, I recognised Dave from Holbrook in New South Wales, who only a few weeks earlier had given a very interesting talk detailing maintenance “Tips and Tricks” at the Holbrook Easter Fly-In, using his lovely Rans S-19 to illustrate.

After chatting briefly, we wandered down to the hangars to register, hand over our $20 to cover dinner and breakfast, and nibble on some cheese and biscuits.

A little while later, a Super Cub had joined the line-up, flown in from Benalla by Louise, accompanied by canine backseat pilot Gizmo. He seemed quite unfazed by the flight, and soon set about looking for rabbits to chase. Later additions to the line-up were a Eurofox, a Lancair, and Matt in his Savannah.

Those of us brave (foolhardy?) enough to be camping under wing, with overnight temperatures dropping to 3 degrees celsius (37 degrees Fehrenheit), set about pitching our tents before darkness closed in. Soon afterwards we grabbed our chairs and lined up to start watching the movies, which were to be screened on a large white sheet attached to a hangar door.

By this time, we had been joined by some local aviators, and there were more than 30 of us eager to settle back and watch the films. Amongst other locations, we came from Wagga Wagga, Tumut, Benalla, Holbrook, and Sunbury.

Watching airplanes on the big screen.

The first film was The Battle of Britain, starring a host of familiar (if rather young-looking) faces. As I had seen the film a few times before, I offered to accompany organiser Katrina into town to assist with carrying 16 pizzas.

The film was stopped so we could all enjoy our pizza. Stomachs filled, we resumed our seats and shortly were watching the second film, the Tuskeegee Airmen. By the time this film ended it was after 10 pm, and we declined the offer of watching another film which was lined up, and headed to our tents, or hangars.

After a rather chilly night’s sleep, we awoke to morning fog, and a significant smoke haze.

We hoped that after breakfast it would clear, so we got stuck into some bacon, eggs, toast and coffee, but, although the fog lifted, the smoke was annoyingly persistent. Although we could see some blue sky looking straight up, the horizontal visibility was poor.

Some people familiar with the area were able to get away, but a number of us from further afield remained, hoping for some respite. On calling the Bureau of Meteorology, we were told that there were three burn-offs in the local area, and not really enough wind to shift the smoke haze. They said the conditions to the north were clearer. Steve and his family from Wagga Wagga were in the 172, and they took off to have a look at the conditions, but returned shortly afterwards, reporting that the smoke from below merged with cloud from above, making it really quite difficult to see. A couple of the others took off at intervals, and also returned with a similar story.

We began to realise we might have to stay at Porepunkah for another night, and as the airfield has no power or hot water, we got a lift into town for us to set up Plan B, which was to enquire at the caravan park and local motel if they had accommodation, and if somebody could both pick us up from the airfield and drop us back in the morning. Phew! Fortunately they could.

Fly-ins often mean making new friends, which is really what it’s all about.

On our way back to the airfield, we saw Steve take off in the 172, and on arrival at the hangars we heard his weather/smoke report over the radio. It was the catalyst for us all to have a final attempt at leaving, as Steve said the valley was flyable at 3500 ft.

By now it was about 3 pm, and we were becoming conscious of 5.40 pm last light approaching. Taking off quickly, I flew up the valley at 3500 ft, and it cleared quite a bit once past Myrtleford and heading west, although it remained hazy all the way back to Penfield, with a few other minor fires en route.

All in all, the Movie Night was great fun, and, for me, the sort of event that recreational flying is all about. It also provided a reminder that a Plan B is frequently necessary in case flying conditions deteriorate due to unforeseen circumstances.

We now have several more flyaways lined up, weather permitting, and I am really looking forward to attending – now with a Plan B already in mind, of course. Neil Sidwell
Born in England, Neil's love of flying started after reading Biggles books while bed-bound with tonsillitis at age 10. Later he cadged flights in Cessnas or Pipers with his former Scout patrol leader, now a pilot. After moving to Australia years later he started flying lessons with Recreational Aviation Australia, and gained a Pilot Certificate at age 54. His first purchase was a half share in a Gazelle. Now retired from a career in IT, he owns a Savannah LSA, and is building a full-size replica Sopwith Pup in his garage/under his pergola. He is hoping that will be finished in the next year... or two... or...

The two rules of weather flying
Scroll to top