Blog - Latest News
You are here: Home1 / Article Archive2 / I was there3 / How one pilot’s story saved my life 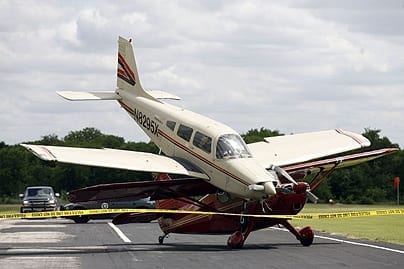 To tell my story, I have to start by telling his story.

Such incidents aren’t quite as rare as you might think.

My friend was landing a high-wing Cessna at McCook, Nebraska, more than 30 years ago. As he began to flare, another low-wing airplane landed on top of him. Somehow both kept their cool and both landed safely, united together forever in what most pilots would call an unbelievable, if not impossible, landing with no injuries. Seeing the photos made a believer out of me, noting where the prop from the top plane cut a gash just four inches in front of his windshield. You can do “what if’s” from now to the end of time and come up with a far worse ending almost every time.

You may be able to say his story saved my life – at least it gave my story a much better ending.

It was a sweet autumn VFR day, 10 mph breeze. I had just finished my commercial ticket so I was current and feeling proficient. I was number 15 to land at Arapahoe (now called Centennial) at Aurora, Colorado. I remember thinking the folks in the ATC tower were earning their paychecks today and this was no time for any extra words or simple questions on the radio.

By the time it was my turn to land, I had the cadence of the tower figured out. He was talking 80 mph with gusts of 100+ mph, and he had his hands full. My commercial flight instructor once told me something that always stuck with me: “The tower provides separation on the ground not in the air.” I never really believed that completely until this day some 25 years ago.

While in the pattern, I noticed a break up in my radio transmission, but never thought much about it until I was safely on the ground. Every time the tower called my tail number, my radio would cut out, but the tower never commented so I assumed they were hearing me just fine. They never once asked for a radio check as the controller had little time to even suck in air. If there was a problem I could check it out later. I had no idea I was being walked on at the time – it just never entered my mind.

My tail numbers ended in 12TC, and I had no idea there was another plane in the pattern with the same TC in his call letters. On final, I understood I was cleared to land. I was checking my gauges, airspeed, fuel, and last-minute normal stuff.

I looked over to my left and saw a jet about to touch down on the 17L runway. As my eyes scanned back to my runway (17R), I saw a shadow of two planes flying together: one was a high wing (on the bottom) and the other was me – a low wing on top. We were between 250 and 350 feet off the ground.

Thanks to my friend’s story, I went to full power and called tower to abort the landing, without ever seeing the other plane, and banking to the right so I could see the plane below me. We were only 30 to 50 feet apart. Knowing he could not see me yet, I wanted to see him, and be ready for any reaction he may take.

The tower controller at a busy airport has to juggle a lot of responsibilities.

Now the tower was at his peak speed and so was I. He did take the time to inform me that I could do whatever I needed to do to stay safe, but if I was comfortable doing a tight 360, he could move me to number two to land. Otherwise I was back to the end of the line, now number 11.

I requested a right 360, 60-degree bank, and I was then number two to land at 400 feet off the ground with full power. As I completed my 360 and tried to bleed off airspeed, the airplane that was number one to land was just touching down. I was going to have to land a little long (again no problem) until number one missed the first and second taxiway exits. Tower informed me that I was still number two to land, but not cleared to land, as I approached the end of the runway 100 feet off the ground and dropping fast.

Tower informed number one he needed to make the next taxiway exit or I’d be forced to go around. I watched him slow to almost a complete stop before making the turn. I was just past the numbers, ready to go full power again as the Tower calls, “Tango Charlie cleared to land or go around your choice.” As I was already near ground effect, I chose to flare and land. Tower called back: “Can you make the next taxiway exit? Number two is on a very short final.”

“Affirmative” was the answer, and I was happy to be on the ground and to have his trust in my flying. My friend’s story in McCook, my instructor’s comment, and my commercial training all paid off that day to make my story a non-event, just a fun story with an expected ending. You could add a lot of “what if’s” to this or any other landing. I hope my story is helpful to someone, too.

Friday Photo: above the clouds in Argentina