Blog - Latest News
You are here: Home1 / Article Archive2 / I was there3 / Flying over water, from Nebraska to the Florida Keys

Living on a lake for 36 years with the end of an active runway so close, I’m able to land and park 500 feet from the water’s edge, my home, my marina, and my hangar. This is a dream for most pilots.

Flying over or to any body of water before GPS was helpful to most pilots—the larger the better. Flying home from Denver, many nights above 13,000 ft., I could see the only circle of lights in central Nebraska long before picking up the VOR. That’s how old I am kids: I learned to fly in the last century.

Every flight for the last 42 years was spent looking for mountain peaks and/or lakes, so it’s easy to see why the Air Force has a base near Pikes Peak—it’s hard to get lost there, even flying inverted. My love of water and flying had me looking for airports near lakes, with a runway at or near the water’s edge.

The bucket list grew. There’s New Orleans Lakefront, where I know a few from my hometown who came up a mile short there many moons ago. That thought never leaves you. Mackinac Island on top of Michigan’s glove is another famous one. Then there’s the Atlantic coast of Florida. 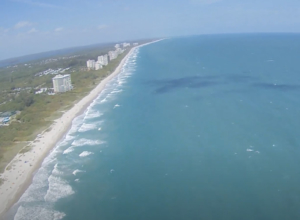 The beaches of Florida make for a beautiful flight

I have walked the beach at Port Saint Lucie, Florida, with my hand-held radio many times, listening to the tower at Stuart Airport. Hearing the comfort level the controller has with pilots, making most directions so simple, is impressive. One of his best was when a pilot asked for vectors to the airport, and his response was, “Follow the coastline—when you see the airport, turn final.”

Working with a confused student pilot who was sure she was east of the airport, he responded, “Are you over water?”

“Then you are not east of the airport.”

My personal favorite was when we were cleared to land on runway 12, and then ATC cleared a Bonanza: “You are number two to land; follow the Mooney over the naked lady.” Like Paul Harvey or Rush Limbaugh, he is prodigious to listen to: full of knowledge and able to convey it easily to a first-time student pilot. After 42 years as a Mooney pilot, I’ve landed at over 60 different airports—some over 50 times—and this controller has a gift for making you feel both welcome and at ease. So I just had to land here myself.

Making Stuart our home base and flying over or to the Bahamas was the plan for March of 2022. Calling AOPA, they put us in touch with a pilot who knew the layout and gave us great advice. After asking many questions about why we wanted to go to the Bahamas, I replied that our main reason was fun and sight-seeing. Due to the ADIZ, COVID-19, and the different countries, his comment was “Let’s remove everything but the fun and sight-seeing part of this flight, stay inside the ADIZ, and land in the Keys if you want to see and land on an island for your first time.” What great and simple advice: KISS. After driving to the Keys twice, I will never make that slow drive again. Flying there was fun, faster, and enjoyable.

Our flight video of the Keys looks like a dream in a movie, truly otherworldly with the many colors. The food at Marathon was great, and eating next to the water and boat docks was a little like home. Everyone was very helpful, and we landed at Marathon twice in three days. The fuel was high at the Keys but I told my copilot we didn’t come for the fuel price. We did miss the world famous Key Lime pie, but that’s a good enough reason to fly back.

The white sand beaches of the Florida’s Gulf Coast are visible at 9000 ft. from five miles offshore. The flight up the east coast to Kennedy Space Coast Museum for a private tour was an unexpected surprise, as they were closed that day to work on planes. President Grant was most helpful that day. Please check this Museum out if you like warbirds; they have a number of one-of-a-kind airplanes with an interesting story for each one. You can easily spend half a day here, and you will be talking to the guys working on the planes. Many still fly or soon will.

Flying out over the ocean to a point you can’t see land gives you insight to how pilots both famous and not could get messed up seeing so many shades of blue. 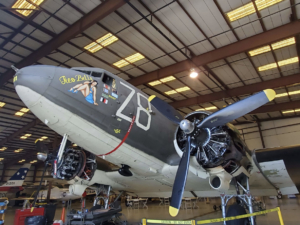 Warbirds are on display in addition to the great ocean views.

If you like, as we do, fast cars old and new check out the weekly open air car show by the beach. You can enter your own family car and make new friends. Located on the Elliott Museum parking lot, next to the Stuart Beach, it includes good music and fun prizes and happens every Tuesday night.

My copilot and I learned to fly in 1980, and we try to take a long, fun flight every few years. This was our best and longest flight, by 300 miles. It may be his last, as he has 11 years on me. We would like to thank AOPA for the great advice to stay in Florida for the first trip, and the many airports we landed at for the great service. The red carpet at Stuart was a first in 42 years of flying: they made an old pilot and copilot feel like we picked the right airport. Florida has a lot to see and offer by land, air, and sea. Let AOPA be your guide to memories you will never forget.

Our next flight is to Albuquerque, New Mexico, for the 50th anniversary Balloon Fiesta. I’ll be breaking in a new copilot on this trip—she can’t land yet, so we have some work to do.

Here’s a video of our flight from Marathon: