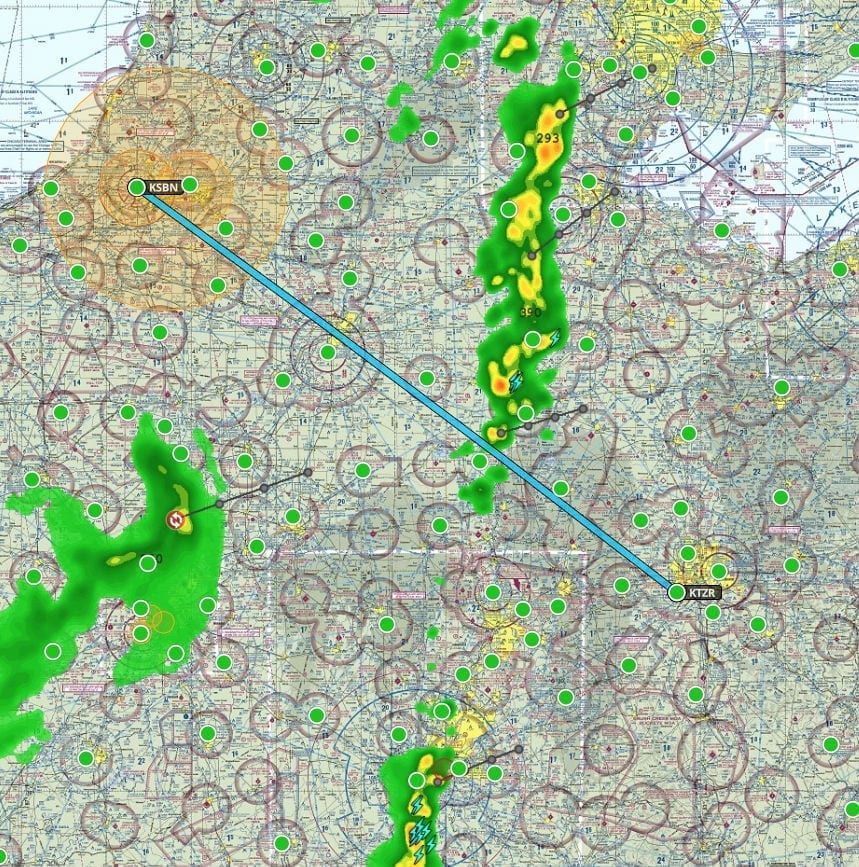 You’ve just passed 500 hours in your Cessna 182RG, and it has proven to be a very reliable traveling machine over the last four years. Today’s mission is to get you home from Columbus, Ohio (TZR), to South Bend, Indiana (SBN). The flight will take just under 1.5 hours, compared to over four hours driving, but as always weather is a potential factor.

As you look at the weather picture in ForeFlight, you notice a few storms developing. Proposed departure time is 2000Z, your flight will be IFR, and your altitude is planned for 8000 ft. Read the details below and then tell us whether you would make the flight or not.

The flight shows lots of green dots – indicating good VFR weather conditions – but there are two lines of rain and thunderstorms near your route. Also note the looming TFR in South Bend. It’s not active until tomorrow, but it will effectively shut down operations around your home when it starts up.

The surface analysis shows the big picture, with a low pressure system approaching from the northwest and a small warm front sliding up from the southwest.

The prog charts show the front moving eastward overnight and into Thursday, May 10. First, the 12-hour prog chart.

Next up is the 24-hour prog chart, valid at 8pm eastern – two and a half hours after you plan to land.

Since the temperatures are warm, there’s no threat of icing below 10,000 feet today. That means radar and satellite are the key items to review. The radar shows some convective popping up as the afternoon wears on, but it’s fairly scattered.

The satellite picture shows a line of clouds around the storms in northern Ohio, but a wide gap between that line and the larger area to the west.

The weather at your departure is breezy, but good VFR, and forecast to stay that way.

Weather at South Bend is quite good, and forecast to stay that way until later in the evening.

It’s time to decide – is it a go or a no go? The weather is solid VFR all the way home, and there is a wide gap in the weather. But it is late afternoon and the temperature is rising – how many storms will develop? Add your comment below.

Flying a Pitts Special over the Amazon

Friday Photo: sunset in the rain
Scroll to top