Blog - Latest News
You are here: Home1 / Article Archive2 / I was there3 / Treating my fear of flying with… flying! 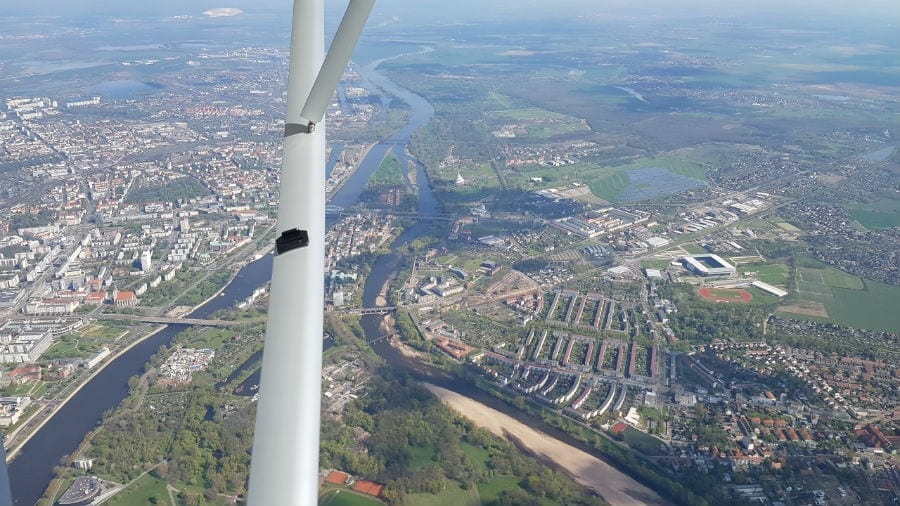 My relationship to aircraft and flying is somewhat of a paradox. On the one hand, I’ve been fascinated by planes, airports and flying since childhood. I’ve been using flight simulators for nearly 25 years, and today I’m even earning part of my money with that. On the other hand, my first real flight happened only ten years ago, and, honestly, it was a bit terrifying back then. All the simulations did not prepare me for the movements, the turbulence, the noises, the narrow economy class cabin, and, most of all, the feeling of not being in control.

The view is great, but it can raise some uncomfortable questions for a nervous flyer.

I still remember the first takeoff I ever experienced. I was going from Hamburg, Germany to Amman, Jordan, because I had to take part in a computer science conference there. I was mildly excited when we taxiied to the runway and I was yelling a bit when I felt pulled upwards for the first time. A bit ashamed of my reaction, I glanced around, and the comforting smile of an old lady made me relax. It was even possible to enjoy a view of Earth I never had seen in reality before. It was interesting how similar Earth looked in comparison to the simulations, but, at the same time, so much prettier.

I was able to enhance this feeling during the next takeoff (I had to change planes in Istanbul), by listening to some uplifting music. It was a great experience. But somehow, for years to come, it was the last time I felt this way – because after the initial excitement, I asked questions. I recognized terrifying screeching sounds on the ground (I now know it was simply hydraulics), I felt cramped between all the other people, I just hated the angle while flying turns (and why do we turn for 20 minutes above the airport?), I was scared when we approached another airport with the ocean only a few dozen feet below us (oh dear, we won’t hit the water, will we?), and I nearly panicked during the small corrections in final approach (the flight attendant watching a bit worried in my direction). Unfortunately, these fears did not become better, and they happened whenever I was forced to fly.

My professional involvement with flight simulation started a few years later. Instead of just playing flying somehow without understanding, I now had to gain knowledge about flying. I had to understand why planes fly, how flights are planned, how navigation works, and so on. This slowly helped me to gain back control. I was able to better understand what happened in the plane and in the various phases of flight. Flying got OK again.

Time to conquer that fear by learning to fly this airplane.

Then, somehow, in early 2017 I went crazy – I went to an information event at our local flight school and signed up for a trial lesson in a small Comco-Ikarus C42C ultralight. They also have gyrocopters, but I wanted a closed cabin, wings and, well, a look and feel of what I consider an ordinary small aircraft. A few days later, the flight happened, and of course I felt the same nervousness I had whenever I entered an airport, but after a short introduction, I made it into the plane, my flight instructor let me taxi to the runway, he then took off, and it was my task to keep the wings level. Oh, how I screamed when we were shaken around! From my simulations, I knew the instruments and some theory, but again I was overwhelmed by the feeling of flight. Most of the time my instructor had to control the plane while I calmed down and took some photos, but sometimes I took control.

After we landed, I went back home. And then there was a strange feeling. An inner warmth flooded me, and a wide smile appeared upon my face. I guess I felt high. There was a strange of mixture of “Oh wow, we survived!“ and “I have to do this again.“ And so I did.

I signed up for the full flight training course a few days later. Since then, I went flying a few times in 2017 (due to time constraints, less than I wanted). In the first lessons I was still yelling when something felt strange, and I’m really thankful for my instructor’s patience. But I slowly got more confidence, I got used to the feeling, and I am now even able to “fly a real turn” as my instructor calls it, when my angle is too shallow. I even did some successful landings already.

Learning to fly means learning how to clean the airplane too.

I recently passed the theory exam of my flight training. After an intense week week 60 hours of lessons about navigation, meteorology, technology, air law and special conditions – like those I was initially afraid of, such as engine failure during takeoff – and a 3.5 hour written exam, I now feel relieved and well-informed. For basically all of my initial fears I now had a logical explanation.

In the upcoming weeks and months, I have to add many more practical hours, and at some point a first solo flight will come. Sometimes I am still worried about this, especially when another general aviation plane crash is in the news. Then I ask myself: isn’t all of this crazy, dangerous, and stupid? What if I have a black-out during final, without the correcting hands of my instructor?

But then I remember the positive feelings I have after our lessons. I remember why the plane flies and under which conditions. And I remember that I’m not a person who takes unnecessary risks. I don’t need to rush. It’s a hobby, for fun, not a job or a competition where I need to perform better than others. Mario Donick
Mario Donick was born 1981 in northern Germany, near the Baltic Sea, and now has a PhD in communication studies. For many years, he was only using flight simulations, about which Mario also writes reviews, tutorials and manuals for FS MAGAZIN (German bi-monthly print magazine). He does freelance work for simulation add-on developers, supports customers in this field, and provides independent research on the perception of simulations and games, currently mainly related to virtual reality and flight simulation. His real aviation career started in 2017, when he finally – despite his fear of flying – decided to go for an ultralight license.