Blog - Latest News
You are here: Home1 / Article Archive2 / I was there3 / My (memorable) first flying lesson 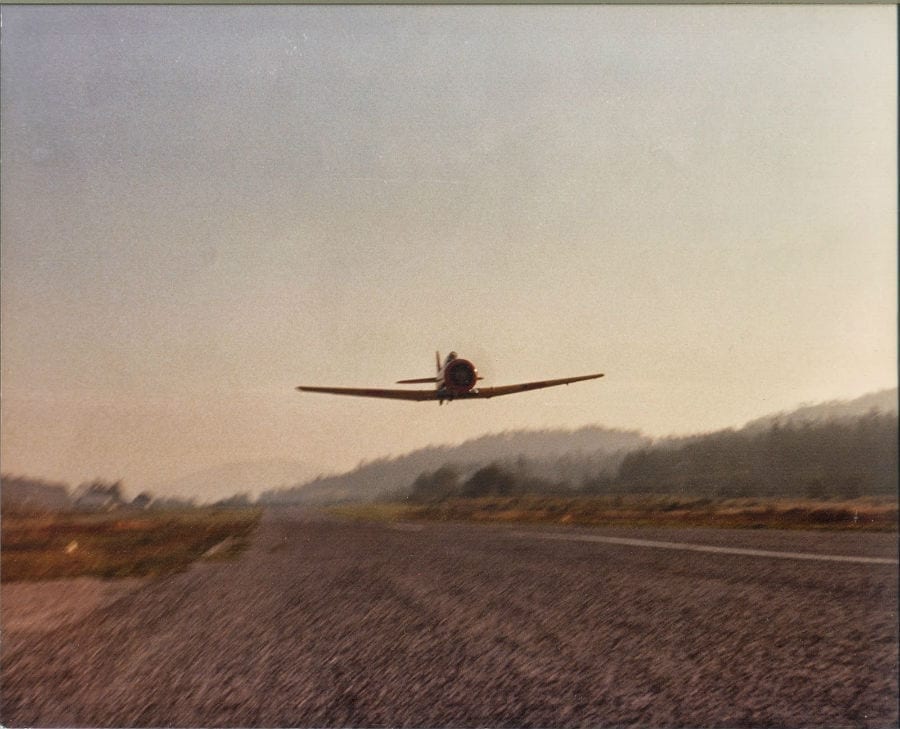 “All men dream; but not equally. Those who dream by night in the dusty recesses of their minds wake in the day to find that it was vanity; but the dreamers of the day are dangerous men, for they may act out their dreams with open eyes, to make it possible.” -T.E. Lawrence

My dreams of flight became real in October of 1971, as the result of my taking on a job which no one else wanted. I was a journalism student at a college in rural California, and a local air show was just getting organized to raise funds for a proposed air museum. Everyone else taking the class just had to do something else that weekend, whether real or invented. I didn’t, and, in addition to a nice line-up of regional performers, there was to be an appearance by some of the replica Japanese fighters and bombers built for the film TORA! TORA! TORA! My inner smartass liked the idea of hustling a ride in one of these dudes and mock-strafing a civilian airfield.

The FAA official supervising the show wasn’t so fun-loving. These were technically experimental aircraft, he pointed out, and I had no business as pilot or crew member aboard one of them. No deal. He wasn’t totally heartless, as it turned out; there was a formation flight of North American AT-6 trainers set to stage a fly-by as part of the show. I could wangle a back-seat with one of them, if I asked nicely. (I should have been nicer to him. He was later one of my ground-school instructors, and I argued with him. He didn’t like it. Things could have gone a lot better. My fault, pretty much entirely.)

Reading books is great, but it’s no substitute for flying a T-6.

I wasn’t coming to this proposition in complete ignorance. My dad’s work in aerospace had infected me with a deep fascination for flight, and I’d read literally everything about it that I could lay my hands on. I’d lucked out amazingly when a neighbor, himself a former Eighth Air Force radioman, gave me a whole collection of Assen Jordanoff’s texts on aeronautics and aviation. Jordanoff, a Bulgarian expatriate and a pioneering airman, became one of America’s best and most influential test pilots between the wars. I plowed through those volumes, even where much of the content was technically beyond me at the time. And I’d had a whole glorious ten minutes in a Bell helicopter over Long Beach Harbor – a tenth-birthday gift from my dear grandfather. I was primed, ready to fly, and had extensive, if still-hypothetical, knowledge on the subject. I thought I was ready for this.

After introductions to the guys with whom I’d be flying (a Civil Air Patrol group who flew and maintained AT-6s), we headed to the display area where our mounts were parked. These had been advanced American and Allied pilot-training aircraft during WWII, and for a long time thereafter in many of the world’s air forces. Squarish, no-nonsense in appearance, with a 600-hp radial engine up front, I knew these weren’t going to make for a quiet ride.

Our pilots unlocked the brakes, other crew removed the tie-down ropes, and we pushed them toward the run-up area. Everyone else knew what they were doing; I asked far too many questions, but climbed into the rear cockpit and started settling in. Well, sort of. I dropped a shearling-lined glove, which fell past the floor-plates into the belly of the airplane. There was no time to retrieve it, but I saw no control cables or anything else for it to interfere with. Hastily I strapped in, as the controls moved eerily around me (control-stick wavering, throttle and prop controls sliding back and forth on the “quadrant” mounting).

Steve Crowe, the pilot, gave a radio call, got clearance, the starter energized with a whine, and prop blades began to pull through. With a loud cough and belches of exhaust, that big engine caught and filled the cockpit with sound. Slipstream rushed by our open canopies, and at a signal we began to taxi. Five of us, plus an ex-Navy Corsair, headed toward the run-up area short of the runway, S-turning carefully to avoid collision (a big, radial-engined airplane with a tailwheel is blind to anything directly ahead – one of the first lessons which young pilots learned when flying these dudes).

Not your typical first flying lesson.

We lined up on the runway, and, at a signal, six throttles went forward as one. The sound was overwhelming, and we came up onto the main landing gear – and lifted off into smooth flight. Gear up, flaps up, and we formed up line-abreast. It had to be nearly as loud on the ground as it was in my rear seat; up here, I looked with growing delight at the smooth formation on either side of me. We banked to the right, and my first flying lesson began – I tried to stay level with the horizon as we banked. Wrong – sit level with the airplane, I recalled from long-ago reading. I relaxed, and marveled at the open desert vista all around me.

Fifteen hundred feet isn’t much altitude, but it momentarily seemed Olympian as our formation turned onto the downwind leg of our traffic pattern, with the airfield looking like a precisely detailed model on our right. Another banked turn onto base leg, then onto final approach for a low-altitude flyby. We came level at about 30 feet, roaring past the showline – I was momentarily sorry I couldn’t be down there and up here simultaneously! Then we pulled up, and flew another big bomber-sized pattern before throttling back, dropping flaps and gear, and dropping to the runway for a sedate landing, rollout, and taxi back to the display area.

After we shut down and tied back down, I tried to discreetly recover my errant glove. I snagged it, but standing virtually on your head in an airplane cockpit can hardly be called discreet. Despite the grins at my naiveté, I liked these people and loved flying – and was determined to make some place for myself in this new world I’d discovered. 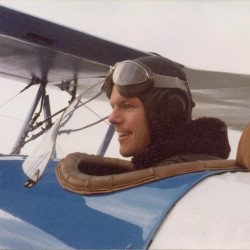 Treating my fear of flying with… flying!

Friday photo: skimming the clouds at sunset
Scroll to top