Blog - Latest News
You are here: Home1 / Article Archive2 / I was there3 / A turbulent, rolling boil in Banning Pass

Most of my private pilot training took place in Southern California, and mostly in San Diego. Given the population of people near the coast in SoCal who own cars that crawl along the interstates during the morning and evening rush hours, there is a pervasive smog and haze layer when relatively high pressure weather systems set in. The ATIS or AWOS/ASOS will report decent visibility with clear skies and beckon an unsuspecting student pilot looking to complete a cross county flight from San Diego to Palm Springs and back.

Banning Pass is a convenient route to Palm Springs, but it has its quirks.

I wrote up a flight log and reviewed it with my instructor. I was to fly east from North Island Naval Air Station toward, but not quite all the way, to Brown Field, out behind and under the class B airspace by Mt. San Miguel, north past Gillespie Field, over Ramona (before it was class D), north near French Valley, overfly Hemet, through Banning Pass and then take a right to Palm Springs. If you would like to follow along, the route was roughly like this: KNZY KSDM KRNM F70 KHMT KBNG KPSP.

What a nice day it was, with light winds aloft coming in from the coast. VMC conditions prevailed. I do wish I still had my flight log and weather briefing to share in this article, but those things are lost in time. My CFI asked me a couple of seemingly random questions about the aircraft performance, route and airspace. Vne was 145 (I think… It was a long time ago). Banning Pass was [is] a narrow passage through from LA to Palm Springs and the winds might be a little higher. I would be operating in mostly class E airspace requiring a minimum of three miles of visibility until I arrived in Palm Springs. We reviewed the procedures for operating in the voluntary TRSA and talking to the tower. I received a stamp of approval from my CFI, filed my flight plan and went to preflight.

I wrote my game plan on my kneeboard with a few quick reference numbers to remember: frequencies and field names. I didn’t write anything about Banning Pass. This was before the time of moving maps and all the enhanced situational awareness that an iPad provides. I always carried a handheld GPS, though, and I still have it, a little Garmin with a monochromatic screen. I entered the waypoints into the GPS, and it took a while because I had to enter them using latitude and longitude off of the sectional chart… one at a time. When it was working, it displayed a pointer and a distance to the next waypoint.

It was probably 2pm or so. I took off, flying away from the ocean, to the east as planned. IFR as a student pilot? You bet! It’s an old joke, but the roads in Southern California were wide and easy to use as a reference.

Lowell Island in the San Vicente Reservoir was another easy landmark to see as well. Using my handheld GPS, I confirmed that I was 6 miles south, also confirming that there was at least 6 miles of visibility… but not much more than that. I continued north as planned. The visibility improved a little as I turned slightly to the northeast along my route. That was nice.

Approaching Banning Pass, I turned east and climbed to 5,500 feet for a better view of what was ahead. Little did I know that the gentle breeze from the ocean would become a turbulent, rolling boil as the Pass compressed the air flowing east and then over the hot thermals of the desert sand north of Palm Springs.

Deeper into the pass I flew, watching Banning Pass airport pass beneath me. My groundspeed increased rapidly. Nearing the end of my journey through the Pass, I called Palm Springs approach to make contact. After completing the transmission, I felt a sharp, very assertive bump that lifted my little aircraft, pressing me deeply into the seat. My handheld GPS departed from the hook and loop fastener I had rigged onto the instrument panel and fell to the floor. I looked at my airspeed, still about 110, but I was much higher than I was before. I pushed the nose down, and the bottom fell out with it. I was lifted now out of my seat; the shoulder harness was keeping my body in place!

The GPS was floating up, like something out of a movie set in space. The aircraft slammed into another column of rapidly rising air. I was compressed by an invisible hand into the seat; the GPS impacted the floor with an audible thud. I lifted my hand to the throttle with much effort. What was the definition of extreme turbulence again? The airspeed indicator climbed unrestricted to just about 135. I couldn’t tell exactly because the aircraft was shaking so much. I could hear my flight instructor’s voice asking about Vne from the preflight. I pulled the throttle back. Shortly after, things calmed a bit.

My next transmission was to Palm Springs to report what happened. My voice was unsteady and I had to repeat myself. I flew to the airport, entered a downwind, and landed to the north.

I parked at the FBO and shut down. I had sweat through my shirt during my little adventure. A lineman came out to the plane and asked if I was OK. I must have looked as rattled as I felt. I went inside to sit down for a while. Someone from ATC must have called the FBO. A flight instructor walked up to me in the lobby. She knew what I had reported, and she asked if I was OK. I was very glad to talk to her and share what I had just learned about thermals, turbulence, and Vne. She was very concerned that I might not return to flying after such an experience. I was concerned too. I was so close to completing my Private Pilot certificate at that point. I called my flight instructor and talked over the situation and determined that I would not fly back that afternoon.

I did go back to flying, with a whole new respect for the weather and operating limitations – and an experience to carry with me for future flights. Incidentally, the plane was inspected and had not suffered any damage, and I was glad for that. 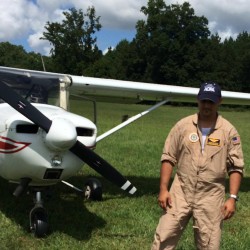