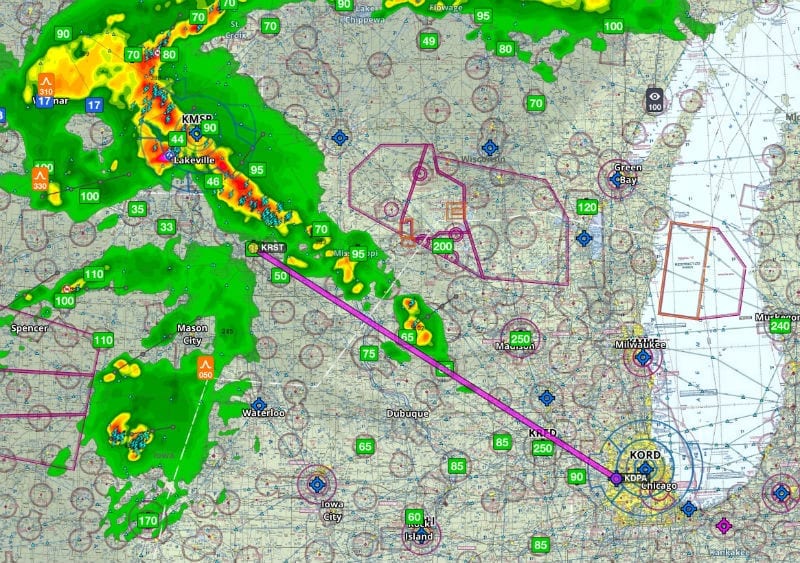 You bought your Cirrus SR22 for business, but today’s mission is strictly personal. You flew from your home near Chicago (DPA) to Rochester, Minnesota (RST), to visit your father, who is recovering after major surgery. He’s doing great, and through the magic of general aviation you can get home the same day. The 240 nm flight should take just under 1.5 hours in the speedy Cirrus.

That is, if the weather cooperates. Check the weather brief below and tell us what you would do. Your proposed departure time is 1830 Zulu.

The map view on ForeFlight doesn’t look like a slam dunk, but it also doesn’t look impossible. A line of storms is just north of Rochester, but it appears to be moving to the north (and away from your route).

The driver of this system is a low pressure system just to the southwest of Rochester, with a warm front stretching out to the east.

The regional radar picture shows that line of storms to the north, with some large sections of red. You’re in the gap right now, and to the south it appears to be mostly green.

The infrared satellite image shows thick clouds to the north and west of the departure airport, but with clear skies closer to Chicago.

Where is that system headed? The prog charts show the low moving east and dissipating somewhat. But rain is forecast throughout the area over the next 24 hours.

Weather at your destination is excellent, although the forecast calls for scattered storms later in the day (after your arrival).

A quick of the AIRMETs shows potential turbulence below 7000 feet through southern Minnesota and Wisconsin.

There are no AIRMETs for IFR conditions nearby.

This makes sense when you look at the freezing level, which is pretty high for late spring.

With VFR conditions and no major threat for icing, your attention turns to convection. This is certainly going to be an issue today, with that low pressure system driving a line of storms. The radar tracks show it moving northeast right now, and the convective outlook shows potential storms marching through Wisconsin and northern Illinois over the next eight hours.

It’s time to make your decision: are you headed for the airplane or for a hotel? There are storms in the area, so there’s reason to be cautious. Then again, it looks like there’s a nice gap where you could escape. Add your comment below and tell us what you would do.

Bonus question: if you decide to go, would you do this IFR, VFR or either?

Friday Photo: Manhattan from a Cessna