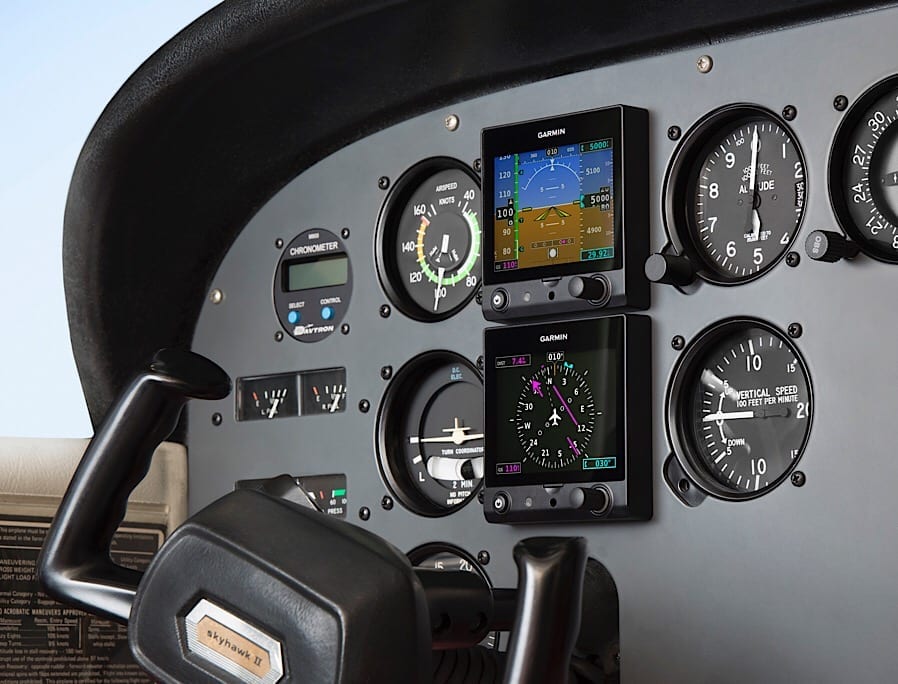 This year’s Sun ‘n Fun Fly-in didn’t have any flashy new product introductions – no $50,000 LSAs or supersonic jets from unknown startups – but there may have been a more important trend unfolding. The vacuum-driven gyro may finally be on the way out.

There has to be a better way…

For the last 50 years, the dry vacuum pump has been at the heart of the instrument panel, driving the attitude indicator and often the directional gyro as well. While inexpensive and compact, such pumps literally operate in a constant state of self-destruction, as the carbon vanes wear away to lubricate the pump. This design keeps the pump clean and lightweight, but also makes it finicky. In particular, contamination from something as innocuous as an engine wash can cause a vacuum pump to fail.

And fail they do. No hard numbers are available on the average lifespan of a vacuum pump, but if you’ve been flying for long there’s a good chance you’ve experienced at least one failure. Even worse, such failures almost always occur without any warning. This leaves the pilot in a vulnerable position – if the failure is recognized.

This often ends badly. While vacuum pump failures are not exactly the leading cause of accidents in general aviation, they are almost always fatal when it happens in IMC. That’s because pilots are typically unable to fly partial panel when it’s for real. The old “needle, ball, and airspeed” routine is good for telling stories in the hangar, but most of us are pretty bad at it. Even experienced pilots often fail to keep the blue side up in these situations.

The crash of a V35 Bonanza last year is just the latest tragic example. A 4000-hour ATP experienced a vacuum failure while in VMC, but upon entering IMC he lost control and the airplane came apart. The pilot and his two passengers were both killed.

Glass cockpits were supposed to solve this problem when they were introduced over a decade ago, but they have remained too expensive and too complicated to find acceptance among the 40-year old airplanes that make up the majority of the general aviation fleet. A Garmin G1000 is an excellent system, but it simply doesn’t help a 1971 Cessna 182 pilot. It’s probably not possible to install it, and if it is possible it’s likely uneconomical. Even in airplanes that do have fully-integrated glass cockpits, the learning curve can be steep.

Given this mixed record with glass cockpits, why should we be excited about a new crop of electronic flight instruments? Far from being mere gadgets, the Garmin G5 and Dynon D10 solve three key problems.

Most importantly, these new products are affordable. At just over $2000 for the “certified” version, it’s a realistic investment for a $40,000 Cessna 172. Installation is also fairly painless, since they fit in a standard 3 1/8″ panel hole and Garmin’s AML-STC covers hundreds of airplane models. One could easily be added during an annual inspection.

They’re replacement instruments, not a full glass panel. That matters.

It’s also worth considering another key difference: the G5 and D10 are not integrated glass cockpits. That may sound like a problem, but it’s actually a feature. Unlike a G500 or G1000, they are refreshingly simple. They are essentially digital representations of analog instruments, with no flight directors or complicated settings. Even with Garmin’s new DG/HSI model, the effect is to have an electronic “two-pack” and not a total panel replacement. This should make them attractive for less active pilots, who can turn on the avionics master and go flying.

Finally, this new class of instruments offers built-in redundancy, so it’s not merely exchanging one failure scenario for another. Solid state AHRS sensors and LCD screens are much more reliable than vacuum pumps and mechanical gyros, for one. Beyond that, both the Garmin and Dynon units feature built-in batteries so they can run for hours after an electrical system failure. Even better, in a two-G5 configuration the DG/HSI can change to show attitude, providing a backup in case the primary attitude indicator fails.

While these new instruments are certainly impressive feats of engineering, the real breakthrough came from the FAA. Both Dynon and Garmin have offered experimental digital instruments for some time, but finally they can be installed in certified airplanes without a costly certification program. This isn’t feel-good stuff – lives will be saved by a relatively minor change in the rules.

Based on initial reaction, the G5 and D10 seem to have hit the sweet spot. At this point, it’s hard to imagine many pilots paying to overhaul a mechanical HSI or attitude indicator, and even that $500 vacuum pump may suddenly seem rather expensive for what you get. They won’t disappear overnight, but the trend is clear.

2017 feels like the beginning of the end for the vacuum pump. Thank goodness.

Double sunsets: falling in love with aviation and Alaska

A date with aviation
Scroll to top