Blog - Latest News
You are here: Home1 / Article Archive2 / I was there3 / Why even the best pilots need to know their limitations

The two years that I spent as the Piper district sales manager for the West Coast were some of most interesting and fun filled of my aviation career. Not only was I learning the aircraft sales business from some of the most experienced and well-respected people in the Piper distributor organization, I was also learning about grass roots flying from high-time, skilled pilots.

Melridge Aviation was based in Vancouver, Washington, and was the Piper distributor for Oregon, Washington, British Columbia and Alaska. During the time that I visited them, I had the opportunity to fly all over the region in all kinds of weather.

Verl Buroker was one of the Melridge sales managers and sales demonstration pilots. A former Navy pilot, he was born and raised in the Pacific Northwest and knew just about everybody up there in the aviation business. He was 15-20 years older than me, and a very soft spoken, easy-going man. When making dealer calls with distributors, we would travel in my demonstrator or one of their aircraft. One overcast, dreary fall day, I was going out with Verl to visit a few of his dealers. I offered to use my airplane, but Verl said that he would just as soon fly their single engine Comanche. Although instrument rated, Verl preferred to fly VFR most of the time. In the Northwest, the freezing level can be real low much of the year and aircraft icing should be avoided whenever possible.

Truer words have never been spoken.

We departed Pierson Airpark in Vancouver in a light drizzle with the base of the clouds about 2000 feet on our first leg to visit a dealer on the Oregon coast, where the weather was forecast to be good VFR. Verl skirted the Portland airport control zone and leveled off below the base of the overcast. Our route of flight was taking us over wooded, hilly terrain and the visibility was four to five miles in no wind and smooth air.

I was getting a bit nervous in this environment as Verl, completely unconcerned, was telling me how he preferred this type of flying to IFR. He related how he grew up in this area, learned to fly here and knew just about every hill and valley. He then announced that just over the next ridge, I would see a small cabin off to the right that he and his Dad used on hunting trips together. All I could see were lots of woods, hills and clouds but just as we passed the ridge I looked down and there was a cabin. I relaxed immediately, convinced that Verl indeed knew every hill and valley in Oregon.

During one of our Piper dealer stops that morning, I noticed a plaque that contained the likeness of an old time fabric aircraft wrecked in a tree. Below it were these profound words which I wrote down and carried with me throughout my flying career:

“Aviation, like the sea, is not inherently dangerous; but it is terribly unforgiving of any carelessness, incapacity or neglect.”

The weather in southern Oregon was improving rapidly and we had no problem crossing the Cascades and found ourselves in The Dalles by early afternoon. When it came time to depart back to Vancouver, the weather dictated that we would be flying down the Columbia River Gorge. The gorge is a canyon of the Columbia River that winds westward through the Cascade Range forming the boundary between the State of Washington to the north and Oregon to the south. It stretches over roughly 80 miles from The Dalles to the eastern boundary of the Portland metropolitan area.

Flying the gorge is a favorite of pilots in the northwest. With some of the mountains along the route exceeding 4000 feet, the minimum altitude required for instrument flight would put an aircraft in icing conditions much of the year. It is also a very scenic route and wide enough in most areas to make a 180 degree turn if necessary. When it comes to winds, the gorge acts like a venturi. As wind is forced into the gorge it speeds up making a rough ride for light aircraft. Verl told me that his personal limitation was anything more than 15 knots of wind forecast at either Portland or The Dalles. Today, the winds were calm and visibility decent even though the mountain tops were obscured by the overcast clouds.

Logging is big business in the northwest and as we flew westbound about 500 feet above the river, I could look up and see large logs being transported by sluice from steep hillsides to down slope sawmill ponds.

The ceiling and visibility began to deteriorate when we were about halfway to Vancouver. Verl pointed out a gravel strip running parallel to the river on the Oregon side and told me it would be used if we had to turn around. “Around the next bend,” continued Verl, “there is a rock shaped like a bear. If we don’t see Bear Rock we’ll turn around and land here.” A couple minutes later, Verl announced that Bear Rock was not in sight as he turned back and landed on the gravel strip.

As we sat on the ground in a light rain, Verl began telling me some tales of flying in the great northwest. He mentioned one pilot in particular, an old-time aviator whose name I have long forgotten. He was a close personal friend and it was obvious that Verl held him in high regard as he recounted some of the adventures attributed to this legendary airman.

The Columbia River Gorge is beautiful, but only if the weather cooperates.

We had been on the ground 15 or 20 minutes when we saw a Piper Tri-Pacer heading westbound. “If he doesn’t come back,” stated Verl, “we’ll go up and take a look.” A couple minutes later, that same Tri-Pacer was landing on the strip and parked beside us. Verl couldn’t believe it when he told me that the Tri-Pacer pilot was the very same aviator he had just been describing to me. I crawled in the back seat of the Comanche as the old gentleman joined us. I was spellbound and wish that I had been able to record the conversation between these old friends that day. Two of the most experienced flyers in all of the northwest sitting on the ground waiting for improving weather and reminiscing about other days.

Shortly we noticed a Mooney passing on the same route of flight. Both pilots up front agreed that the visibility had not improved enough and that the Mooney would soon join us. The Mooney did not return and about 30 minutes later we departed for Vancouver. The weather was improving and sure enough there was an outcropping of rock that, with a little imagination, could be seen as a bear on its hind legs. The few miles into Vancouver were uneventful and we landed at Pierson Airpark in nice weather.

The next morning, when I got to the Melridge office, it was foggy in the entire area. Verl pointed to a story that he was reading in the Portland paper. A Mooney on a flight from Spokane to the Portland area the previous afternoon had failed to arrive and a search would be made today. Verl had already called a friend at the local FAA to tell him about the Mooney that passed the gravel strip. Later that day, when the fog lifted, the wreckage of the Mooney was found between the gravel strip and Troutdale airport.

I immediately thought of the message on the plaque that I had seen the day before. And then the significance of Bear Rock dawned on me. All pilots need to know their own limitations as well as those of their aircraft and those brought about by outside influences such as weather. I had sat in a Comanche on an emergency strip in the Columbia River Gorge with two of the most experienced pilots in the Pacific Northwest. They knew their limitations; they did not see Bear Rock and they turned around. We’ll never really know what went on in the mind of the Mooney pilot that day, but it is safe to say that Bear Rock was not part of the process.

I would see Verl Buroker numerous times in the ensuing years at various Piper worldwide dealer meetings at places like Disney World. I would always take the time to sit down at his table and share a beer and reminisce with him about flying in his beloved Pacific Northwest. And I will always fondly remember the day that real pilots introduced me to the fact that all of us should have our personal Bear Rock. 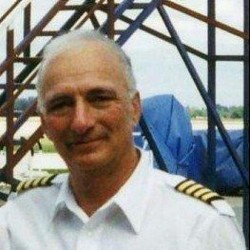 Arriving at the VFR sweet spot – without colliding or spinning in