Blog - Latest News
You are here: Home1 / Article Archive2 / I was there3 / Don’t let a forced landing get you down 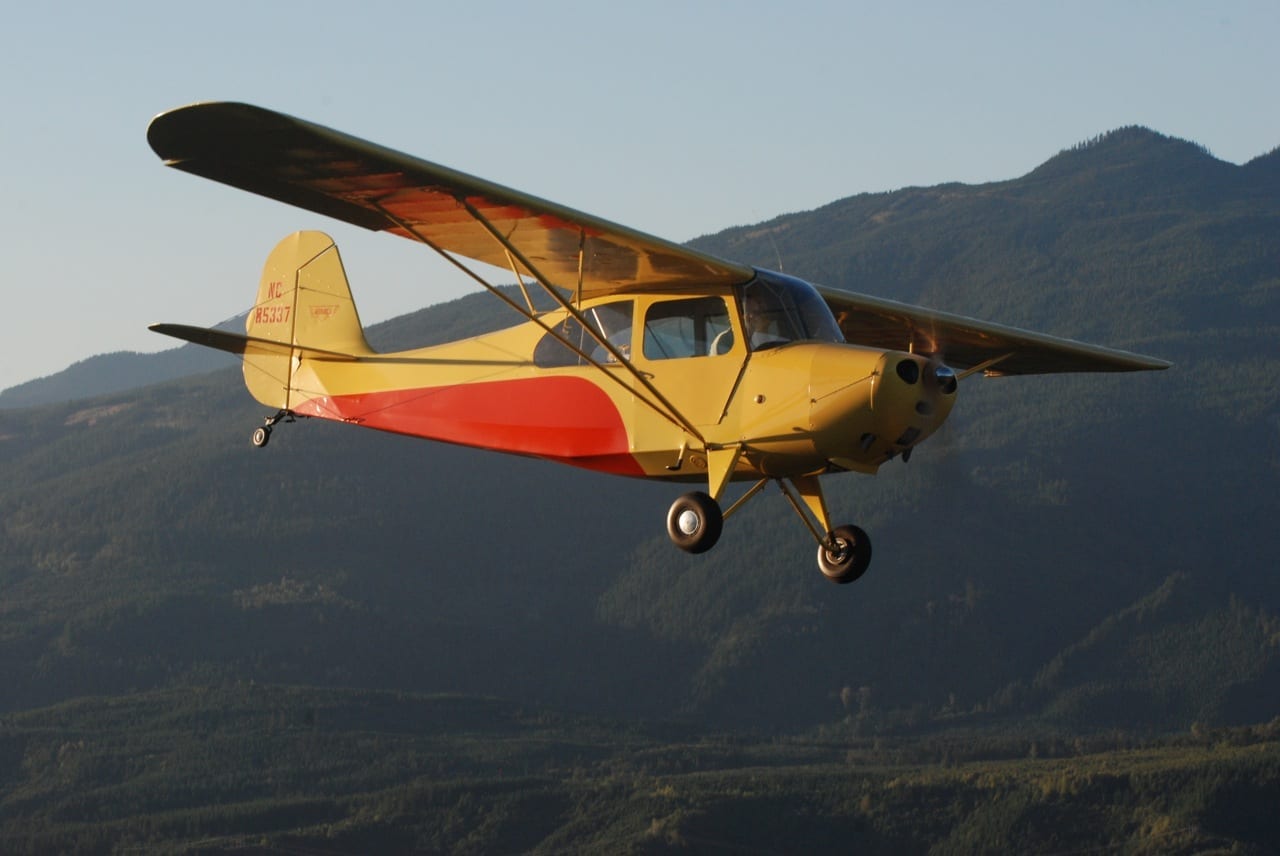 Unless you fell off a turnip truck yesterday, you are probably aware that flying airplanes involves a certain amount of risk. Back in the good old days, we didn’t talk much about risk, possibly to alleviate any fears on the part of fledgling students. The cold hard truth that flying was risky wasn’t good for business.

Nowadays, the FAA has taken a different tack, and mandates risk management as an integral part of flight training. The trick is to try to manage the majority of risk that most pilots fall victim to. This task usually falls to the flight instructors who guide novices through the process of becoming pilots. We do this through education – teaching the knowledge, attitudes, and procedures necessary to make safe decisions, along with stick and rudder skills. Although it may not always produce the desired results, it is deemed far better than the past practice of “learning by our mistakes,” which, when combined with aviation, can be a very dangerous process.

The sign said “Learn to Fly – $80.” It was posted at the entrance to the airport, a small grass strip located near the Mississippi Gulf Coast. It turned out that “learning to fly” meant going solo; after that, more cash was needed. Still, it was a pretty good deal. As a 17-year-old airman with a few extra bucks in his pocket, this was an opportunity not to be missed. How could I pass it up?

Learn to fly for $80? Pretty good deal for a young airman.

A few months before starting on the road to becoming a pilot, I had joined a busload of other Air Force recruits on a road trip from Lackland Air Force Base in San Antonio, Texas, to Biloxi, Mississippi, where I was assigned to be trained as a radar technician. The Air Force kept us on a short leash for the first few months, but during the latter part of our nearly year-long training regimen, they allowed us the freedom to pursue other activities, such as enjoying the sights and sounds of nearby Biloxi.

As it turned out, one of my squadron mates, who was possessed of unbridled enthusiasm and the desire to learn how to fly, informed me of the fabulous $80 deal being offered at the North Biloxi airport, and convinced me to start taking flying lessons with him. It didn’t take much convincing. As an added bonus, he had a car to get us there.

Art, the new owner of the flying service, had apparently decided a change in career was in order after spending a good deal of time farming and cropdusting up north. A nice little flying service in warm and sunny Mississippi was just the ticket. It was a mom-and-pop operation with his wife doing the scheduling and office admin stuff. Art was also the chief pilot and flight instructor and probably did some maintenance on the side.

The aircraft that came with the operation consisted of two Aeronca 7AC Champs, a Piper PA-12, and a Cessna 140. The Champs worked the hardest and were in need of some TLC. One other thing you should know about Art is that he was hard of hearing on the ground and essentially deaf when airborne. That meant that all communication with Art while airborne was one-way: him to me.

April 21, 1957. Sitting in the front seat of an Aeronca 7AC, I listened to Art shouting at me from the back. He wasn’t shouting because he was upset. It was the only way he could make himself heard over the din of the engine. Who knew that 65 horsepower could be so loud? This was before headsets and intercoms. Only hot-shot military pilots wore headsets in those days, and intercoms in light aircraft were virtually unheard of. Despite the limited communication, after four hours of dual instruction, I was starting to get the hang of this flying thing.

Just when I was getting into my comfort zone, the throttle ceased performing the function for which it was intended, namely to make the engine go. I had been practicing glides with the throttle closed. When I opened the throttle to climb, I was unpleasantly surprised to discover that it had absolutely no effect on the engine, which continued to tick away at idle. Could this be some sort of stealthy ruse perpetrated by Art to test my mettle?

The problem was obviously way above my head. I quickly decided it would be best to defer to Art’s better judgement, but I was having a hard time getting the point across to him, while at the same time he was yelling at me to initiate a climb. By this time we were down to about 500 feet AGL. Finally, I got his attention by flopping the throttle back and forth a few times, with absolutely no effect on the engine.

The Aeronca Champ runs better when the throttle works.

The FAA now emphasizes what is referred to as “procedures for positive exchange of flight controls.” This is normally a verbal exchange between two pilots who are trying to figure out who is really in control of the airplane. Traditionally, the exchange of flight controls usually occurred when the flight instructor shouted, “I’ve got it!” just in time to avert disaster. Apparently this was not acceptable to the FAA and they wanted a slightly more formal procedure. Back in 1957, in our little Aeronca, the exchange of controls was somewhat of a hit and miss proposition, especially with a low-time student and one-way communication. I felt Art on the controls, but I didn’t let go. Was I still flying with Art’s help and guidance, or was Art solely in control of the aircraft?

I saw an open field ahead and started to line up for our untimely return to terra firma. Art spotted something I had missed: stumps and rather large rocks. He elected to side-step to a narrow country road, slightly crowned, running parallel to the field. Thankfully the volume of vehicular traffic in that part of Mississippi was sparse at the time and the road was all ours. I was still following through on the controls. At a critical moment after touching down on the road, with the airplane veering towards one side, I did something that was not unexpected for a four-hour student. I promptly stomped on the opposite rudder. The airplane pirouetted in the opposite direction and headed straight off the side of the road. The little Champ came to a rather abrupt stop with a telephone pole embedded in one wing and a tree in the other. The little Air-knocker was pretty beat up, but we exited without a scratch.

Needless to say, I was extremely chagrined at having botched up a perfectly good emergency landing. In response to Art’s query on the whereabouts of my feet during the erratic escapade, I think I mumbled something unintelligible instead of owning up to it. Art chose to ignore this and set to work resolving our current dilemma. Thanks to the help of a passing motorist and a couple of trips back and forth, we had the now partially disassembled Champ back in its hangar. As it turned out, the reason that the throttle stopped functioning was the lack of a simple safety device on the linkage, a five-cent cotter pin in a castellated nut.

Art didn’t want to give me too much time to mull things over and worry about forced landings, or worst of all, to quit flying. So a couple of hours later we were back up in another 7AC. Interestingly, Art’s endorsement in my logbook that day makes no mention of the incident, as if it had never happened. I had lost my innocence, but thanks to Art’s persuasive methods, not my nerve – at least not entirely. There were lessons here for both of us. After that, during every pre-flight, I made darn sure the throttle linkage was securely connected, although blissfully unaware of the multitude of other things that could go wrong. I’m sure Art also paid a little more attention to the mechanical condition of his aircraft.

I went on to solo after about seven hours of instruction. Shortly thereafter, I finished my radar training at Keesler and was reassigned to a nice mountain-top in Pennsylvania. Conspicuously absent from my new assignment was an airport to continue my flight training, which had to wait a few more years until finally achieving my Private Pilot license in December of 1961. I celebrated that event with a couple of friends, demonstrating the advantages of being a newly minted pilot by renting a Cessna 172 for a long, uneventful cross-county flight, where we spent New Year’s Eve enjoying the sights and sounds of Las Vegas.

The North Biloxi airport is now long gone and no record of its existence or the lessons learned there can be found, except perhaps in the pages of a few old logbooks. For me it was a starting point. As the years went by, there were lots of other lessons awaiting me. There are probably a few more yet to be learned.