Blog - Latest News
You are here: Home1 / Article Archive2 / I Can't Believe I Did That3 / It can happen to you – a low fuel confession 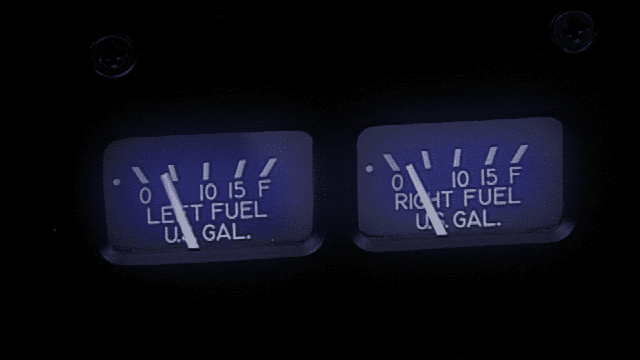 I always said of pilots who lived through fuel starvation that “God protects drunks and fools… and they probably weren’t drinking.” I never understood how someone could be so thoughtless. And then this…

A few years ago, a coworker and I were involved in a high profile, time-sensitive project that regularly took us from Valparaiso, Florida (KVPS) to Langley Air Force Base (KLFI) and Manassas, Virginia (KHEF). We carefully planned for each trip in our aero club’s red and white Cessna T210K. This time machine would change a three-day trip into a single-day event. It held 89 gallons of fuel and would burn as little as 13.2 gallons per hour in cruise.

Although simple math gave us more time, we planned for a maximum available engine-running time of no more than six hours. This made our T210K a perfect mode of transport for this trip since, with the right winds, the trip to either KLFI or KHEF was just short of four hours.

As our project began to come together, we had a very important meeting at Langley Air Force Base followed the next day by a meeting in Manassas. Another coworker who was about to begin USAF pilot training became interested in our project and asked to tag along on this flight. Additionally, one of our senior coworkers found the prospect of traveling by GA aircraft very interesting, and asked to fly from KLFI to KHEF with us on the second day.

Due to a multitude of scheduling issues, we were reluctantly forced into an early morning, day-of-meeting departure. Our planned wheels-up time was 4:00 a.m. so we could arrive around 8:00 a.m. The FBO was only about ten minutes from the meeting so we felt confident in making the 10:00 a.m. appointment.

The night before the flight, we saw forecasted VFR conditions and 10 knot headwinds over the entire route. Prior to our IFR departure, we confirmed the forecast and loaded the three of us into the trusty Cessna. The future flight trainee sat in the rear and watched our preparation and asked some very astute questions as we taxied out for departure. We were airborne just prior to 4:00 a.m. and were relieved to find the forecasted clear skies and light winds.

After 30 minutes, we changed tanks and noted we were slightly behind our expected location and began to discuss the cloud layer that was developing about 1000 feet below us. Thirty minutes later, we switched tanks again and noticed we were significantly behind schedule and now on top of a solid overcast. After a call to Flight Watch, we got the same forecast we had prior to departure. However, we estimated we were flying into a 40 knot headwind. Our PIREP regarding both the winds and overcast was met with the same skepticism and confusion we were experiencing in the plane.

A little public-cockpit math said that the four-hour flight time with a 40-knot headwind now became a five-hour flight. The ceiling at KLFI was now 1000 feet, but two very close airports were reporting marginal VFR. The difference in the forecasted and actual winds did not instill confidence in the forecast at our destination. Our comfort factor was now gone, but our optimistic calculations still suggested that we would have time for an approach and remaining fuel for more options.

This was the point where my rationalization began to become clear to me. In the backseat sat someone watching the decision-making process of two 20-year pilots. We weren’t trying to impress him, but we had really talked up the benefits of using the aero club airplanes for business trips and didn’t want to have to back-peddle on our story. At Langley Air Force Base was a senior coworker waiting on us to attend an important meeting which we had been working toward for many months. We really wanted to be at this meeting! We had made this flight several times recently and the weather at our destination was cause for caution, but not concern. As we ran through the scenarios in our heads, the worst case was that we landed with less than the hour of fuel we always want to have. So we pressed forward with full knowledge that we were no longer being our normal, cautious selves.

We changed altitudes but did not find better winds… in fact, it seemed to be getting worse. We kept careful watch on our time on each tank and continually calculated the fuel we had remaining on each tank. As we got within 25 minutes of KLFI, we began to feel more at ease. We were flying on the right tank and estimated 20 minutes left in that side and 23 minutes left in the left tank. As a precaution we began to look for airports with instrument approaches between us and KLFI where we could stop for fuel if needed… there were none.

Can you really trust those gauges?

As we settled on that realization, the engine sputtered and began to slow. Switching to the left tank remedied the problem almost immediately. But we now found ourselves 21 minutes away from KLFI with an estimated 23 minutes of fuel and the knowledge that our best calculations on the first tank were 20 minutes off! At that moment I remembered thinking “so this is how that happens” and not having had anything to drink, I knew how I fit into the “drunks and fools” adage.

We checked the GPS and charts for the closest airport and obstacle clearance altitudes. Confident that we could be legal if we could get under the overcast, we found Greensville Regional (KEMV) just to the north of our route (but no instrument approach we could use). After talking to ATC and describing our intent, we descended through a hole that had opened about one mile to the north. It wasn’t graceful, but we found ourselves 500 feet below the overcast only seven miles from the airport. We closed our IFR flight plan, landed, and put 78 gallons of fuel in the plane before heading back into the clouds. At KLFI we shot an easy ILS and parked the plane only 10 minutes from our meeting… about 30 minutes after it began.

We had missed our meeting but made it to our destination. I am certain our observer was less than impressed with my decision-making skills, but perhaps the experience served him well in his flying career. Our senior coworker’s confidence in the utility of GA airplanes was not bolstered on that day, but he did fly with us to KHEF the next morning. My biggest revelation that day was that I was, indeed, susceptible to “get-there-itis” and that I had some work to do on my personal judgment.

I also consider every flight that followed to be a gift given to a very sober fool.

Stephen Hunter
Stephen Hunter is a Commercial/Instrument/AGI pilot with a BS in Aerospace Technology from Middle Tennessee State University and an MS in Aerospace Science from Embry-Riddle Aeronautical University. He is privileged to be currently serving as a Lt Col in the United States Air Force assigned to US Central Command. He is also the proud father of two young ladies and blessed to be the husband of Julie Hunter, LL.M. Stephen is an active Civil Air Patrol pilot.

Debate: are drones good or bad for general aviation?
Scroll to top