Blog - Latest News
You are here: Home1 / Article Archive2 / Go or No Go3 / Go or No Go: coastal California flight 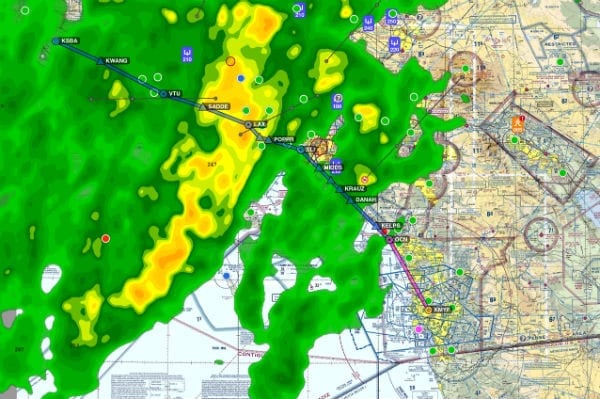 It’s not a long flight, and it’s the type of mission that makes your Cessna 182 such a valuable asset to your business: a dash down the coast of California from Santa Barbara (KSBA) to your home airport of Montgomery Field in San Diego (KMYF). A four hour drive turns into a one hour flight, but will the weather cooperate?

Your 182 is well equipped, with a G1000 glass cockpit, autopilot and XM Weather, and you have over 700 hours in the airplane. But your instrument currency is at least a year out of date, so this flight will have to be VFR. Take a look at the weather reports below, and let us know if you would go or cancel. Proposed departure time is 0030Z.

The surface analysis chart doesn’t show much in the way of major weather systems, except for a weak cold front off the coast:

This picture is misleading, though, as a look at the radar shows:

The satellite image supports the gloomy view out the window:

Given that ugly radar picture, the text weather reports aren’t as bad as might be expected. Various METARs along your route show VFR conditions:

There is one METAR that deserves attention – NZY, which is on the water, is low IFR.

How long will these mostly-VFR conditions hold up? A look at the prog charts show the cold front moving onshore:

The radar and the TAFs are not encouraging, with rain showers forecast to bring ceilings and visibility down later in the day. On the other hand, the current weather conditions are almost uniformly VFR. Can you get home before the weather goes down? Or is it time to rent a car? Add a comment below.

Friday Photo: sunset over a composite wing
Scroll to top