Blog - Latest News
You are here: Home1 / Article Archive2 / I was there3 / Flying an old Boeing to China for Christmas 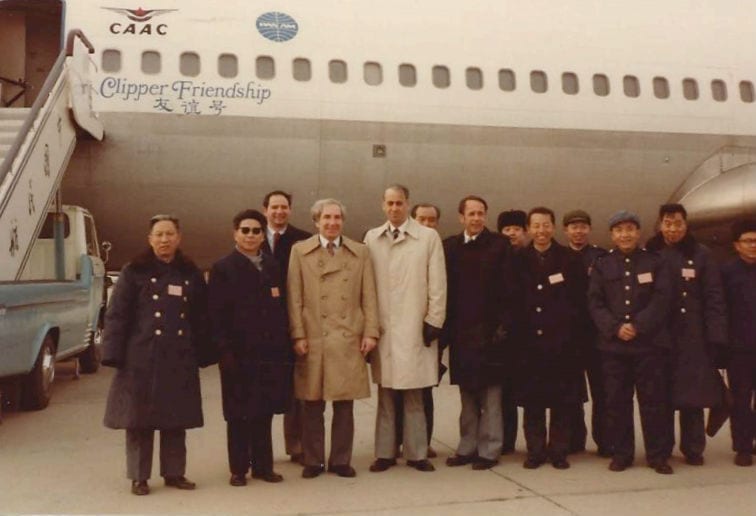 Ask airline pilots where they want to be during the Christmas to New Year holidays and most say… home with family and friends! Senior pilots take vacation; less senior pilots bid around that period. Junior captains and first officers accept their fate and spend holidays in the cockpit. For them, Christmas is whenever they get back home. In December 1982, we split the difference; being with wives and kids, but on a 707 odyssey to Tianjin, China, celebrating Christmas Eve in a frigid airport dining room with the leaders of China’s airline, CAAC.

Does that say China Clipper or China Scissors?

It all started with President Nixon’s bold trip to the People’s Republic of China in 1972 which paved the way for full diplomatic relations that year. Nearly a decade later in 1981, after a 32-year hiatus, Pan Am re-started scheduled air service to Shanghai and Beijing via Tokyo. In recognition of the route’s importance, the first returning Pan Am flight into China, a 747SP, was renamed China Clipper after the Martin 130 flying boat (known as the Creeper because it cruised at about 110 knots), which pioneered trans-Pacific operations 46 years earlier. China Clipper appeared prominently in both English and Chinese on the SP’s fuselage just forward of the main cabin door. But Chinese characters can be tricky in translation and as the 747 taxied in at Beijing, local dignitaries looked on with puzzled expressions, not understanding why such a grand flying machine was named China Scissors! But everyone was happy and U.S. – China air service was again a reality.

A year later, our 707, renamed Clipper Friendship in English and Chinese characters painted near the forward cabin door along with Pan Am and CAAC logos, began the three-day journey to Tianjin, China. The Chinese purchased the plane for its Tianjin technical school to train students in aircraft structures. Engines weren’t part of the sale and would be removed and shipped back to Pan Am. It was a people-to-people goodwill trip as well as a business deal and, in the spirit of the season, we were encouraged to bring immediate family members along. Each leg was fully catered from Pan Am kitchens, minus liquor. The system chief pilot was the captain, I was the co-pilot and a line check engineer operated the flight engineer’s panel. A manager from aircraft sales and an employee fluent in Chinese accompanied us to handle administrative and language details. Including the kids, aged eight to about 16, there were 15 aboard as we lifted off from JFK en route to Seattle, our first overnight stop.

In keeping with common practice, the captain operated the first JFK-SEA leg. The next day, bright and early, we departed SEA on the grinding, 11-hour trans-Pacific flight to Tokyo’s Narita Airport.

Our 707 reflected that period of transition in the 1980s when cockpits combined old and new avionics simply to keep up with a changing world, and even the new would soon be obsolescent. Changes began slowly in the mid-1960s when flight navigators steeped in the techniques of celestial navigation and altimetry (calculating drift by frequently measuring absolute altitude and pressure altitude traversing high and low pressure systems) were replaced by Doppler navigation systems and loran receivers on flights over the Atlantic and on most Pacific flights. By then, navigators were only needed on Pan Am’s remote Pacific Island flights where loran coverage was too sparse for a fix.

In the 1960s and late into the 70s Atlantic and Pacific plotting charts were a web of numbered intersecting hyperbolic signal delay curves. Each station had its own color to prevent confusion, and getting a fix was skilled work.

Loran signals viewed on a cockpit pedestal cathode ray tube were often hard to interpret and easy to misinterpret because operators had to discern which bounced off the ionosphere before reaching the plane and which came directly from the transmitter. And only one station could be received at a time. Also, available stations had to be selected carefully for optimum line-of-position (LOP) geometry in order to plot the most useful fix. Optimally, the first station’s LOP fell parallel to the track and the second “speed line” LOP crossed the track line as close as possible to 90 degrees.

Doppler – better than nothing, but still a lot of work.

If signal geometry was marginal and sufficient loran coverage existed, a third loran LOP was plotted and the first two plots moved forward, based on Doppler miles traveled, to overlay the third plot. At best it was clunky, even in the most skilled hands. Loran was largely phased out by the late 1970s and replaced with Omega navigation systems. Pilots were delighted, but airlines grumbled at having to shell out the money for the far superior but nevertheless costly Omega sets and cockpit modifications.

Compared to Loran, Omegas were a giant leap forward, automatically receiving usable transmissions, integrating raw data with the 707’s compass and air data systems and providing direct readouts of lat/long, track, groundspeed, wind and ETA much like inertial systems. Also, Omegas could accommodate up to nine waypoints, rivaling in many respects inertial systems of the day. Yet their main function was to update the clunky dual dopplers, which could only accommodate two legs (A and B) at a time and were the 707’s only over-water navigation system coupled to the autopilot.

On oceanic routes such as our trans-Pacific flight, pilots had the choice of coupling the dopplers to the autopilot and continually inserting new legs as the flight progressed, or flying solely in the autopilot’s heading mode and making adjustments to keep the Omega’s cross track error at or close to zero. Almost without exception, pilots chose coupling the dopplers and staying one leg ahead as the flight progressed, re-setting a new course and distance as the A leg switched to the B leg and vice versa.

A peculiarity of the doppler-omega mix related to how each tracked the course between waypoints. Omegas computed great circle courses which incrementally changed between waypoints while doppler courses were rhumb lines crossing meridians at a constant angle. As a result, omega midpoint position plots often varied by miles although the positions merged close to agreement approaching the waypoint.

And so it went over 11 hours, periodically resetting thrust, inserting courses and distances in the dopplers, plotting positions, crosschecking Omega positions and transmitting position reports at each 10 degree meridian, as we tracked abeam the Aleutian Islands then down past the Kurils on our way to Tokyo’s Narita Airport. The wives mostly read and chatted, the kids amused themselves with games, snack hunting in the galley and occasional forays to the cockpit to ask “When will we be there?” Up front, amid Jepp charts, flight logs and the plotting chart, we just kept to the business of getting where we were going.

Approaching Tokyo, ATIS reported VMC and moderate winds so I elected to hand fly the approach. Tokyo Approach Control provided a comfortable vector onto the ILS final approach course and I stabilized on Vref, 1000 feet above touchdown with the gear down and final flaps extended. Passing over the threshold with the runway’s fixed distance markers just ahead, I eased back the thrust levers, flared and touched down… with a jarring, metallic clunk. The old Boeing shook it off with no apparent damage and kept dutifully rolling forward as I deployed speed brakes and reversed the engines.

Coming out of reverse at 80 knots, the captain took steering control and exited onto a high speed taxiway. It was a definitive touchdown but no one said a word. Maybe they had seen worse or had their own landing memories. I have no idea how I so misjudged the flare. But it would all end soon for the old bird which only had to endure one more good, bad or middling landing in Tianjin before retiring to Tianjin’s technical institute where it would reside as a learning tool for eager young students.

The author (third from left) in front of the airplane, along with his Chinese hosts.

The next morning, we departed Narita on the final leg to Tianjin. The nine waypoints loaded into Omegas traversed nearly the whole route southwest along the spine of Japan to the tip of South Korea and northwest to Tianjin. Omegas were a welcome backup to what was then China’s primitive airways system and terminal navaid infrastructure. Tianjin’s only arrival procedure was an NDB approach. The runway was a mostly unmarked long, concrete slab.

Our doppler-Omega combo had done its job getting us across the Pacific and ADFs had shown the way to Tianjin with a little help from the Omegas. And like China that was shedding its insular past, the avionics that had gotten us there would soon largely disappear as well. Dopplers would be relegated to the scrap heap or museums, Omegas shut down and phased out, replaced by FMSs, GPSs and IRUs. The only exception, our trusty ADF, which somehow defies progress and soldiers on.

We taxied to a drab terminal building where a truck-mounted passenger stairway pulled up to the forward cabin door. About 15 Chinese officials from CAAC, clad in blue or green top coats and Mao uniforms, greeted us on the tarmac. We all assembled for a photo by the airplane then were whisked to the terminal building for arrival formalities and on to a nearby hotel. The heavy scent of soft coal fumes hung in the air inside and outside.

It was Christmas Eve and CAAC officials arranged a dinner celebration at the terminal building. The children joined us at tables piled high with meats and unrecognizable colorful, Chinese delicacies amid bottles of wine and sweet, spiked punch. CAAC executives in their Mao outfits sat amongst us. The children poked at the strange objects on their plates, gulped glasses of the punch then predictably descended into groggy lethargy. There were toasts to peace and cooperation. Some older CAAC staff who had attended Christian missionary schools before Mao Tse Tung’s time sang the Christmas carols they remembered. The staff put out the best they could muster that cold Christmas Eve and I’ll always remember it as the very beginning of China’s new place in the world.

Killer autopilots? It is all in the eye of the beholder