Blog - Latest News
You are here: Home1 / Article Archive2 / John's blog3 / More than just a gadget – how the iPad is making flying safer 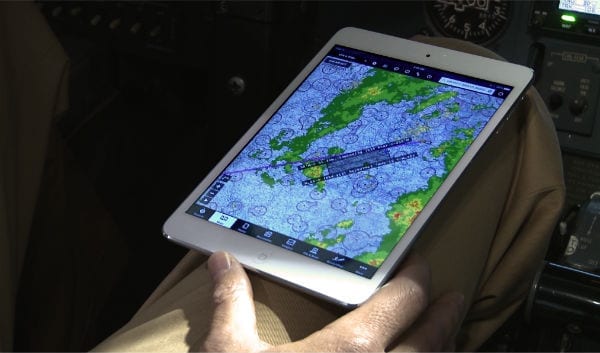 Pilots typically wear their skepticism like a badge of honor. Diesel engines are more fuel efficient? I’ll believe it when I see it… Airplane parachutes? It’s a fad!

That’s what makes the iPad revolution so surprising. For all their cynicism, pilots have adopted tablets and apps like eager teenagers. Just five years ago, no one had ever heard of an “Electronic Flight Bag app.” Today, the majority of general aviation pilots – and a whole bunch of airline and military pilots too – are flying with one. How many other tools are used by Air Force tanker pilots and J-3 Cub drivers alike?

No longer an unusual sight.

Sure, there are some curmudgeons who dismiss this as just the latest technology obsession that is destroying our stick and rudder skills, but these voices are increasingly rare. Far more common are the pilots who are simultaneously intimidated by technology and yet open to trying the iPad – old dogs who are working hard to learn new tricks.

Why the rapid adoption here, when so many other worthy technologies have been ignored? Certainly tablets are affordable by aviation standards, and they’re also justifiable to the family budget since they can be used for a host of non-flying applications. More than anything, though, I think pilots are realizing that the iPad is much more than just a gadget: tablets and the apps they run are making general aviation safer, less expensive and more vibrant. If that sounds like naive cheerleading, consider a few of the benefits that we now take for granted.

Tablets democratize avionics. The majority of pilots are either renters or flying club members, which means they do not directly control the avionics in the airplanes they fly. That’s obvious, but it has major implications. If Garmin adds an incredible new feature to the G1000, the vast majority of pilots don’t have access to it. With tablet apps, though, every pilot can have that new feature overnight – often for free. Cutting edge avionics are a reality for anyone with a $500 tablet and a $75 app, not just owners of new airplanes.

Everyone has current charts. Now that the statute of limitations has run out for most of us, we can admit that we might have occasionally flown with outdated paper charts in the past. It was easy to fall into that trap, due to cheapness, laziness or just plain bad luck. Now we have access to every aviation chart, IFR or VFR, for the entire country, and they can be updated in a matter of minutes. That’s good for safety.

The universal availability of terrain alerts has been good for general aviation safety.

Terrain and obstacle awareness is mainstream. Here’s one technology with a proven record of success – since Enhanced Ground Proximity Warning Systems began appearing in airline cockpits twenty years ago, the rate of Controlled Flight Into Terrain accidents has plummeted. Now general aviation pilots have access to similar safety features, with 3D terrain profiles and pop-up obstacle alerts available on even the most basic apps. True, portable GPSs have offered versions of this for years, but tablets make it less expensive than ever before. More importantly, they’ve made it so much easier to keep that obstacle database up to date, which really matters.

Weight and balance is fast – so pilots actually do it. Let’s be honest: doing a weight and balance calculation is no fun at all, ranking right up there with sorting the sock drawer and getting a root canal. While the iPad hasn’t exactly made weight and balance fun, it has made the exercise a lot faster and easier. After an initial setup process, computing an accurate gross weight and CG number is laughably easy: slide a few bars to the correct values and look at the pretty picture. If it’s green, you go. Because this is easier, more pilots than ever actually calculate the numbers before flight. I know I do.

Datalink weather has never been easier or less expensive. When portable XM Weather came along in the early 2000s, it transformed cross-country flying. No longer did pilots have to draw mental pictures of radar imagery based on vague Flight Watch descriptions. Portable ADS-B receivers and tablet apps are continuing the transformation by driving costs down (subscription-free in this case) and functionality up (a large touch-screen is a great way to look at weather). While no datalink weather will ever “solve” general aviation weather accidents, pilots have access to more information than ever before.

Fuel price information saves pilots money. Finding the price of fuel used to be surprisingly hard, so most of us didn’t even look. Apps now make this task so easy it’s almost fun, especially if you’re hunting for that cheap self-serve fuel. More than one pilot has graphically planned his route of flight based not on weather or FBO facilities, but on fuel price. The iPad has also made pilots active participants in this process, since they can quickly update prices as they pay – no need to fire up the laptop after the flight. With avgas well above $5 in most places, that can save some significant money.

Tablets engage passengers. While this advancement may not impact aviation safety, anything that encourages non-pilot involvement is a welcome change for pilots. In my experience flying Young Eagles, I’ve noticed than many kids are as interested in the iPad as the airplane. If that’s what sparks their interest, who are we to complain? Apps also demystify the pre-flight and in-flight decision-making process for non-pilots: it’s a lot easier to show your spouse the radar picture on your iPad than it is to decode the scribbles you made after listening to the Flight Service briefer. This type of collaboration reduces anxiety and stress for both pilots and passengers.

Apps have helped aviation rediscover its innovative, start-up culture. Beyond the day-to-day benefits for pilots, the emerging world of aviation app companies has been a shot in the arm for the aviation industry. Some of the winners of the iPad age are established players, but many are not. Dozens of companies, started by pilots with an innovative idea, are competing to deliver better products at lower prices. That kind of competition is healthy, and pilots are the real winners.

One other player deserves credit for the iPad revolution, and it’s one that rarely gets mentioned: the FAA. (I can hear the comments being typed already!) It would have been all too easy for them to kill the nascent app world before it was even born, and history certainly offers plenty of examples of promising technology that was destroyed by the heavy hand of regulation. That didn’t happen here. Part 91 pilots (and even Part 135 and 121 pilots to a large extent) have tremendous leeway to use tablets for everyday tasks, including as legal replacements for paper charts. There are no complicated certification requirements and no paperwork. Kudos to 800 Independence Avenue – at least for that.

No, the iPad may not solve all our problems in aviation, but no one ever promised it would. For now, it’s enough to say that our portable supercomputers have made flying a little bit safer, easier and less expensive. Let’s pause for a moment and appreciate how rare that is these days.

Losing a wingman: the price we pay

Debate: is registering drones a good idea?
Scroll to top